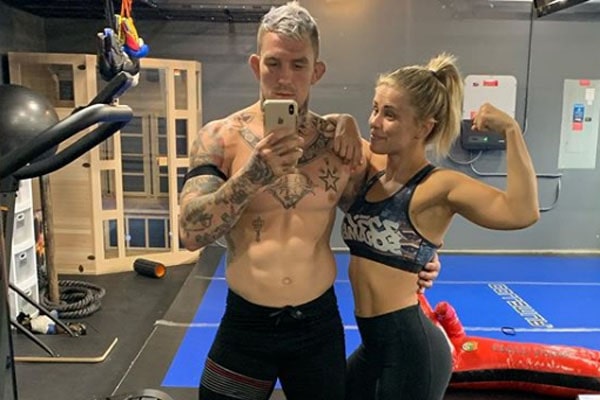 Paige VanZant and her husband, Austin Vanderford married each other in September 2018. Image Source: paigevanzant/Instagram.

Gorgeous Paige Michelle Vanderford, professionally known as Paige VanZant, is an American Mixed Martial Artist, author, and model. She also has appeared in the T.V. series, Dancing with the Stars and Chopped. Talking about her personal life and marriage, she married her husband, Austin Vanderford, in September 2018.

Paige VanZant’s husband, Austin Vanderford, is also a professional MMA fighter. Along with that, he is also a two-time NAIA All-American and national champion wrestler. The lovely couple is an ideal match for each other, and their love for each other is still young as it was at the start. Now, let’s not waste any further time and know more about Paige and her husband, Austin Vanderford.

As stated before, Austin Vanderford, aka The Gentleman, is a professional MMA fighter for the American Top Team Portland. The fighter ranks at #98 for Best MMA Middleweight fighter. Austin’s Pro MMA record is 9-0-0 and also has a 13 win streak. He made a promising career as an MMA fighter.

Paige VanZant’s husband also made a great platform in the world of MMA. With his great physique, he might be able to achieve some marvelous dreams for which he has been thriving. Austin loves working out, spending hours in the gym, and maintaining his body fit for fights.

Talking about Austin Vanderford’s net worth, he probably has a satisfying net worth. The contract offers for the fights seem to be grand ones. Even if his earnings have not been disclosed yet, Austin has made an astounding life from his career.

The Start Of Paige And Austin’s Love

The adorable MMA couple, Paige VanZant and Austin Vanderford, began dating each other in 2017. With time, the two love birds got real close, and their feelings for each other grew immensely. Paige and Austin dated one another for over a year, and immediately in Jan 2018, Vanderford proposed to his wife, Paige, romantically.

The UFC fighter posted a photo of her other half, getting on one knee to propose. Paige struggled to hold back tears but happily said yes and got engaged. Well, Austin Vanderford’s wife Paige may have had one hand in a sling, but the other sported a new diamond. She took her relationship public, posting on her social media.

Then, as mentioned above, the fighter couple married each other in September 2018. VanZant shocked the world by announcing her wedding on Twitter, indeed. She posted some beautiful and romantic couple photos of her with her husband, captioned “Mrs. Vanderford.”

The love birds have been together for quite some time now. But they still have a long journey ahead to go along and be with each other for eternity. We can say that they are the perfect match. But they have not been parents yet. Perhaps, they are working on things to be wonderful parents before having children/kids.

Nevertheless, Paige and Austin could bombshell the world with their young ones’ news pretty soon. Everyone is probably waiting to see them having kids. So, let’s be patient to hear the good news for now.

Paige VanZant Failed To Drown Her Husband In ‘Experiment’

Even if Paige VanZant is a UFC star, it does not mean that she’s got the strength to drown her MMA fighter husband in the bathtub. Paige playfully tried to see if she could hold Austin underwater as a part of an ‘experiment.’ She also posted the video on her Instagram. Vanderford said that he genuinely wanted her to give it 100 percent.

In the video, VanZant laughed, sitting on the edge of their bathtub. She explained how she gave her best shot. But her husband Vanderford was able to emerge from her grip in a second. Paige also said,

“Truthfully, he was just trying to get me to say, ‘Yes, baby, I’m so blown away by how strong you are.’ ”

From that, we can tell how strong their relationship is. Paige and her husband, Austin, just love having their own fun and cannot resist a single moment without one another. Plus, they love making TikTok videos and posts on Instagram, too, which is so adorable.

MMA Couple And Their Vlogs To Watch

You may not know this, but the MMA couple also has a YouTube channel that goes by the name, ‘A Kickass Love Story: With Paige & Austin.’ It has over 24.4k subscribers, and if you are Paige and Austin’s fans, then don’t forget to ‘subscribe and click the bell icon.’ The YouTube videos are related mostly to their fight weeks and behind the scenes.

Plus, their romantic tour around the world, fan mail openings, and other videos are the best ones to watch. Perhaps, the married couple wants to post such videos on YouTube as their love memories and moments.

So, the loving pair has a great bond and relationship. We hope their love for each other never fades away but remains as young as it was in the beginning forever.