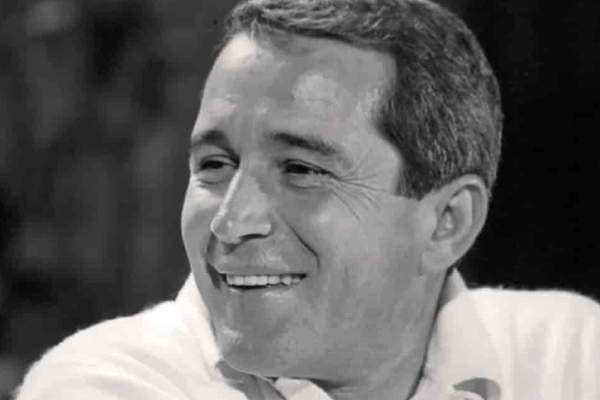 Pierino Ronald Como, popularly known by his stage name Perry Como, was a singer, actor, and television personality of American nationality. He was involved in the music industry for more than half a century. In his career, he sold over millions of records and pioneered weekly musical variety TV shows. He received Emmys five times from 1955 to 1959 and also earned other different awards.

Away from the glamorous world, Perry was a family guy who loved being with his spouse and kids. He was married for more than six decades to Roselle Belline. Their love story was no less than a fairy tale. Hence, in today’s article about Perry Como’s wife, let’s find out how it started for the duo.

Childhood Lovestory Turned To Happily Ever After

Perry and Roselle’s relationship goes back to the time when he was just a barber. She had been with him even before he became a world-famous singer. The couple shared so many things in common.

Both of them were kids of immigrant dads and moms who settled in Washington County. While Perry’s family was from Italy, the Bellines came from France. They both grew up in households where English was a second language, and everyone spoke the homeland language constantly. Another thing that that duo had in common was their families’ devotion to the Roman Catholic faith.

The lovebirds met when he was an apprentice barber in the shop of Steve Fragapane in Cannonsburg, Pennsylvania. Their first encounter took place at a picnic at Chartiers Creek, Pennsylvania. The singer was smitten the first time he looked at her and turned to win her affection. He asked her to accompany him to a school dance, and she accepted. As a result, Perry Como’s wife was the first girl he ever took to dance.

Roselle said “yes” at that time without knowing she would be with him for the rest of their lives. The couple began dating, and although he was a barber then, he often sang to his customers. By 1931, Roselle Belline’s husband began performing on stages around Canonsburg. So, she went with him to Meadeville to join the Freddie Carlone Orchestra.

On July 31, 1933. the long-time duo tied the knot when Belline was just 19 and Perry was 21. The childhood love story turned to happily ever after, and the married couple further grew their family.

As mentioned earlier, Perry and Roselle were married for over six decades. The adorable duo welcomed three kids together in all those years of being husband and wife.

On January 15, 1940, Perry Como’s wife, Roselle Belline Como, gave birth to their first son Ronald “Ron” Perry Como, aka Ronnie Como, in Chicago, Illinois. After him, the duo was not able to have any kids naturally. So the pair adopted their daughter, Terry Como, when she was six months old and their son, David Como when he was four years old. Likewise, as per a site, Terry was born in 1947, and David was born in 1946.

The family of five resided at home with a garden, a pool table, and an outdoor grill. Roselle’s husband always wanted to keep their kids normal children and did not want to subject them to much commotion. All thanks to Perry Como’s spouse, their babies grew up well-mannered in an era when celebrity kids grow up spoiled.

In an interview, Mrs. Como revealed that when their children went to college, they did not allow them to have their own cars. Instead, they were allowed to drive Perry and Roselle’s cars at home after getting their permission. Well, it seems like Roselle did a great job by teaching many things, which later became useful for them.

Perry Como’s Wife Remained By His Side No Matter What

Only a few are lucky who get their happily ever after with someone with whom they fell in love the first time they met. Just like that, Perry and Roselle’s marriage is an excellent example of a lifetime bond in a world where heartbreaks have become so common.

While Perry rocked out in the world and made names, Roselle stayed at home, raising the kids and making sure they didn’t get influenced by the glamour of the entertainment world. It was not that often she traveled with Perry, but when she did, she was never present on the opening nights because she used to get too nervous.

The next few years after Roselle Belline’s husband joined the Freddie Carlone Orchestra, it was tumultuous life on the road with the band. Money was tight, and they had a tough time, but they were frugal and lived on what Como made. After he signed with the record label RCA Victor in 1943, the family moved to Long Island, New York.

While the Como family managed to shield themselves from public scrutiny, the couple often gushed about one another. They were thankful for several reasons but never talked about it as that kind of gratitude is done than said. Likewise, when the duo celebrated their 65th wedding anniversary in 1998, Perry Como’s spouse, Roselle Como, stated that their happy and blissful marriage was a gift from god.

Looking Back At Roselle’s Life

Just two weeks after the couple celebrated their wedding anniversary, Perry Como’s other half suddenly passed away from a heart attack in August 1998. Perry, who remained with her throughout his entire life, was completely devastated after her demise. In a charity event, he even dedicated his song “And I Love You So” to her.

Born Roselle Belline in 1914 to immigrant parents from France, she grew up in the southwestern Pennsylvania mining town of Canonsburg. Apart from being a supportive wife, she was an accomplished artist. Her artworks have been exhibited in numerous galleries like Gallery One, situated in Lake Park, Florida.

Roselle also took a vocal and active interest in her hubby’s career. For instance, the pressing stopped when she was unsatisfied with something he recorded. The void that her absence left in the singer’s life was not explainable.

Unfortunately, on May 12, 2001, Roselle Belline’s husband passed away at his home. Even after their death, the couple remained together as they were buried at Riverside Memorial Park. Tequesta, Palm Beach County, Florida.

Indeed, Perry and Roselle’s love story is no less than a fairytale. It can inspire people around the world.