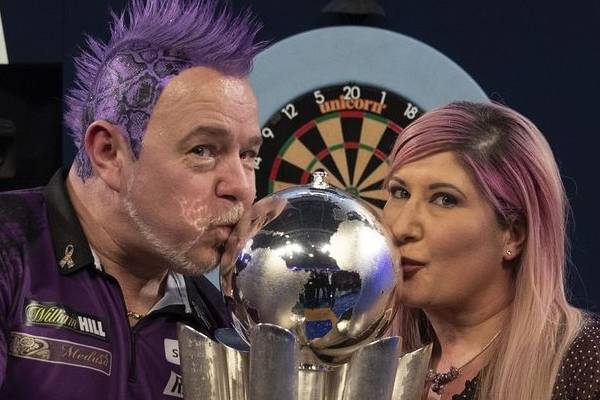 Known best by his stage name Snakebite, Peter Wright is a Scottish professional darts player who won the 2020 PDC World Darts Championship. Although the game of darts is not a sport that fascinates many, Wright has gained worldwide acclaim by competing in Professional Darts Corporation (PDC) competitions for decades. The darts player is currently the world No. 2 on the PDC Order of Merit.

Peter also became the current World Matchplay champion after winning his first World Matchplay title in 2021. While Wright’s and Dimitri Van den Bergh‘s match was a whirlwind of emotions, the most moving part was seeing Peter Wright’s wife, Joanne Wright, cry in joy over her husband’s triumph.

Peter and his sweetheart are currently on cloud nine, but it has not been an easy ride for the pair. So, let us learn about the woman who helped Peter Wright get to where he is now.

Married For A Long Time

Peter Wright’s marriage to Joanne is not a secret. The celebrity wife attends most of her partner’s games, and Peter frequently praises his beau. What remains a secret are the details surrounding their personal life.

Even though the love-smitten pair have no problem displaying their affection for one another in front of their admirers, they are tight-lipped about their private life. As a result, where the pair first met and tied the knot is unknown.

From what little we see of the lovely couple on camera, it is evident that they are head over heels for one another. Moreover, given that Joanne and Peter have three grown-up children, we can assume that the lovers have been together for a long time.

So, let us wish Wright’s partner well and hope that their marriage grows stronger over time.

Talking about Joanne Wright’s profession, she works as a hairdresser and owns Medusa Unisex Hair Salon located in Lowestoft. Some of the services provided by her salon, along with their prices, are as follows:

Peter’s spouse has used her fame to market her business on social media, where she has a sizable following. Owing to this, her businesses must be thriving.

In addition, as Peter’s manager, she also promotes his products from the Peter Snakebite Wright website through her Twitter account. It is undeniable that Peter Wright’s spouse is his most ardent admirer and inspiration.

So, we can expect to see the celebrity wife supporting her husband in the coming years.

Peter Wright is a sight that fans can hardly miss. His eye-catching and unique hair color, as well as his iconic snake-painted hairstyle, is a trendsetter. Peter’s hairstyle sets him apart from the others, and he only has one person to thank for it: his wife.

While talking with the Daily Mail, the champion revealed that he spends nearly two hours after practice having his hair styled by his lover. The darts champion also stated that the longest time his partner ever spent doing his hair was four and a half hours. While his wife styles his hair, his daughter, a hairstylist, chooses the color elements.

Spending hours working on someone’s hair is not an easy task, let alone doing it every day, yet his wife seems eager to style his hair. This gesture alone demonstrates how much Peter Wright’s wife genuinely loves and supports him.

Much like Wright’s professional life, his personal life has had its ups and downs. In May of 2020, the athlete revealed that he was sick with worry about his wife’s spine surgery. Furthermore, he stated that he was particularly worried about the operation because his wife could end up in a wheelchair if something went wrong during the procedure.

Unfortunately, her surgery did not work out, and she had to undergo another major back operation. However, this surgery too did not provide much relief to his partner. The dart champion later made it clear that his wife’s health is his main priority and watching her struggle with back pain every day is annoying.

Wright’s spouse then got a spinal steroid injection under deep sedation at London Spine Clinic in May of 2021. The athlete hoped that the steroid would work, or else Joanne would have to undergo another major surgery.

As there have been no further updates on how the treatment went from Joanne and her husband, it is safe to assume that the steroids are providing some comfort to the celebrity wife. So let us all wish the celebrity wife the best and hope that her health improves over time.

As previously stated, Peter Wright’s wife has three children: Mimi Wright, Jessie Wright, and Tristan Wright. Their daughter Mimi serves as a hairstylist at Medusa and is the mastermind behind the sportsman’s eye-catching hair colors.

Moreover, she recently got engaged to her boyfriend Stuart and shared the news on her Twitter account.

Had an amazing time up the rock today where Stuart proposed to me , I have found the one I can completely be myself with my best friend , my soul mate I love you endlessly forever ❤ pic.twitter.com/U8rqR9J6zB

Jessie and Tristan, on the other hand, prefer to live their lives away from the spotlight. As a result, the general public knows very little about them. Yet, they occasionally attend their father’s matches from time to time. Clearly, the children love and support him.

Joanne’s kids place a high value on family and even looked after her while recovering from her spine surgery. So, let us wish Peter Wright and his family well and hope that their happiness grows over time.