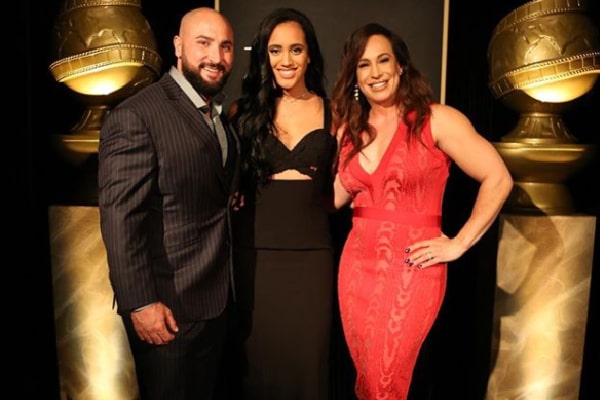 Whether it be life partners, business partners, or merely a friendship, knowing the value of a relationship brings immense change and respect. Such is the relationship between Dwayne Johnson and his ex-wife, Dany Garcia. The pair have been working together since 2008 and recently announced the return of XFL in 2022.

Well, besides the monumental moment of being the first female sports league owner with XFL, she has been enjoying a blissful marital life with Dwayne Johnson’s fitness trainer, Dave Rienzi. The couple is shutting the myth of ‘age difference’ and living their best life. Did it sound like a love triangle? Well, of course!

Johnson’s ex-wife, Dany, moved on after several years of parting ways with him. Although Dave, Dany, and Dwayne Johnson’s relationship might sound weird, they made it work pretty well.

Furthermore, Johnson went on to describe Dave as one of the best men. He further expressed his training as intense, nasty, unapologetic, and hardcore. Thus, Dwayne The Rock Johnson credits Dany Garcia’s husband for his incredible fitness.

The pair went on to share vows after a few months of building courtship.

Furthermore, the pair went onto share vows in an intimate ceremony on 29 March 2014, surrounded by friends and families. Additionally, Dany Garcia’s husband, Dave, came third in the IFBB North American.

Johnson congratulated Dave’s achievement via Twitter on the day of the event in September 2014. It looks like Dave and Dany’s conjugal brought them great fortune and success.

Furthermore, Dave Rienzi’s wife, Dany, is fourteen years older than him. Despite their age difference, the couple celebrates their love with great affection. Furthermore, the lovebirds upload pictures of them on Instagram, thanking, and appreciating their hard work.

On that note, Dave not only loves his wife as a partner but helps her with her training as well.

Needless to mention that Dave and Dany Garcia are into bodybuilding since one is a professional fitness coach, and the other is a pro bodybuilder.

A couple that shares a common value tends to maintain a great understanding and respect in a relationship. This could be the reason for the intense bonding and love between Dave and Dany.

Besides sharing life, Dave also helps his beloved wife with her fitness training. Moreover, he recently posted a video with a heartwarming caption where Dave praises his beautiful wife’s persistence and discipline. Likewise, Dany also acts as Dave’s hypeman and continues to honor his dedication towards his work.

However, there is much more to the couple’s relationship than just sharing a common interest and having a close circle. They are also responsible parents to Dany Garcia’s daughter, Simone Alexandra Johnson, with former husband, Dwayne Johnson.

As mentioned above, the relationship is not just about sharing common interests but bearing responsibilities rightfully. So, Rienzi and Garcia tick the charts off regarding the responsibility as well.

Dany welcomed a daughter, Simone Alexandra Johnson, with her husband, Dwayne Johnson, throughout their decade-long marriage. Although the former couple’s marriage ended in divorce, their relationship remains strong even today. They raised their daughter together and expanded their business as business partners.

Like Dwayne, Dany’s husband, Dave, helped to raise Simone as well. The pair hasn’t welcomed any kids together but raised Garcia’s daughter together. Therefore, Simone is seen appreciating Dave as her father as well.

Let’s hope the love birds enjoy their life together in the coming days and the same love and intensity.