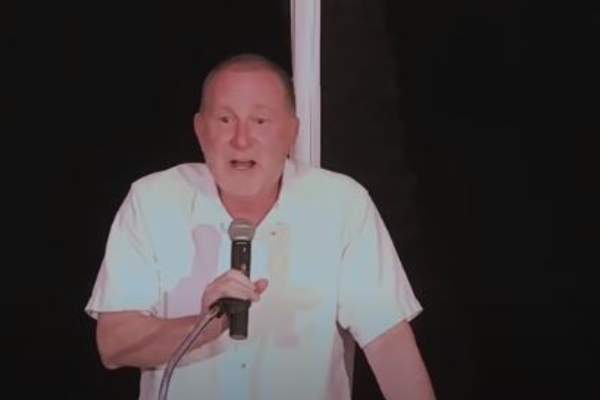 Robert Sarver and Penny Sanders have been married for many years now. Image Source: Social Media.

Talking about his personal life, the businessman is a family guy and spends a lot of time with his spouse and kids. He has been happily married to Penny Sanders for many years now. So, how did it start for the duo? To find out that, take a look at this article about Robert Sarver’s wife.

The love story of Sanders and Sarver dates back to the 1990s. Talking about their first meet, the duo encountered each other for the first time in 1991 in Scottsdale. The couple fell in love instantly. For the next five years, the pair only dated as they chose not to rush into sharing their wedding vows.

On November 2, 1996, the lovebirds tied the knot. The couple said their I dos in an intimate ceremony in San Diego. Furthermore, it was reported that only their family and closest friends graced their wedding.

The years that followed were blissful and happy. The duo has remained together through good times and bad, rich and poor, just as they promised when they got married.

It has been over two and a half decades since the couple tied the knot. After years of being by each other’s side and loving one another, the duo has formed a family of five. Robert Sarver’s spouse Penny Sanders Sarver gave birth to their three kids, all boys.

Penny and her hubby entered parenthood for the first time with the arrival of their baby boy, Max Sarver, in 1997. Two years later, in 1999, Penny Sanders’ son, Jake Sarver, was born. Furthermore, Zach Sarver is the couple’s youngest child, whom they welcomed in 2001.

Did you know Penny’s child, Jake, went into a coma after suffering a severe brain injury in mid-July 2016? While on vacation with his mom and two brothers, he went skateboarding on Coronado Island off San Diego. After a horrific spill, he fell on his head and suffered a subdural hematoma. The injury put Sarver Jr. into a coma, and he woke up ten days later after undergoing emergency brain surgery.

The family of five currently resides in Rancho Santa Fe, California. Robert Sarver’s sons with Penny are often spotted alongside them at NBA games, but despite that, very little has been divulged about their personal lives.

Also Read: Know If Model Ana Barbosa Is Dating Anyone

Penny Is A Native Of Kansas City

Robert Sarver’s wife, Penny Sarver, was born Penelope Sanders and hails from Kansas City. It is not known which high school she attended, but she went to the University of Oklahoma. From there, she reportedly earned a bachelor’s degree in business.

After completing her studies, Penny moved to Phoenix, where she was hired by Prentice-Hall publishing house. There, her role was to market textbooks to universities. Within a year, she met her hubby, and the rest is history. Unfortunately, information about Mrs. Sarver’s current profession has not been disclosed.

Got Involved In A Controversy

In November 2021, Penny Sanders’ husband was investigated by NBA for allegations of sexism and racism against him. Amidst that, she confirmed about contacting three former Phoenix Suns employees, which the contacted ones viewed as “threats.”

Mrs. Sarver revealed to ESPN that she decided to reach out to some people in order to try to set the record straight and to let them know how saddened and disappointed she was by the misinformation being circulated about her husband and the Suns’ organization. She further added that she shared the betrayal that she felt and touched on some of the sufferings her family was enduring.

However, those contacted revealed that Penny’s messages were sort of an intimidation tactic. She reportedly sent two messages from an Instagram account, “@pennsar,” and one as a text message from her cell phone number. One of the people she contacted was Earl Watson, the former head coach of the Suns. He was one of the 70 interviewees that told Sarver encouraged a toxic workplace.

Addressing the allegations, Robert Sarver’s spouse said that any suggestion that she attempted to intimidate anyone is absurd while also being untrue and outrageous.

In November 2021, the businessman was accused of passing around a photo of Penny in a Suns bikini while at a meeting. He reportedly showed the picture to staffers early on his tenure as the Suns’ owner. One former executive revealed that they passed it around like a hot potato.

The former employee added that they were not sure what to do with that. Addressing the allegations, Penny Sanders’ husband revealed that a local clothing store had received permission to market swimsuits using the official NBA logo in the first year of his tenure. He snapped a photo of his wife wearing the sample the retailer had sent them along with a brochure.

Likewise, Penny’s spouse was said to have made derogatory remarks at staff meetings and talked about their sexual details, including oral sex with her. However, he denied all the allegations.

The Husband And Wife Are Involved In Charities

Besides all the controversies, the Sarver couple has also worked on behalf of many people. The pair come from a philanthropic family that is tied to the state’s most respected and active charities. Since 1988, the duo has been helping the Sarver Heart Center with many donations.

All in all, Robert Sarver’s wife seems to be doing well. She has gracefully handled the responsibility of being a spouse of a business magnate and a mother. We wish her more happiness and prosperity in the coming days.