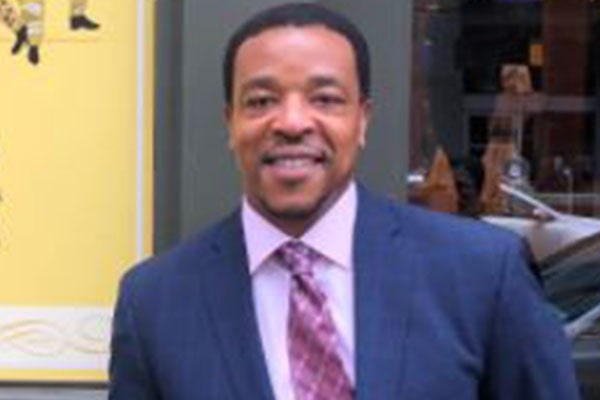 Russell Hornsby is one of the well-known actors. Image Source: Denise Walker Twitter.

Russell Hornsby is an American actor famous for his role as Edward “Eddie” Sutton on the popular ABC Family series, Lincoln Heights. Apart from that, he has also appeared in various famous roles like Luke on the HBO drama In Treatment, Detective Hank Griffin on the NBC series Grimm, and many others. Apart from series and movies, he has also acted in video games. All these different ventures have helped him earn fame and wealth.

Russell has established himself as one of the talented actors in the entertainment industry. Besides his spectacular acting skills, he is also an amazing husband to his partner and a family person. The talented actor shares a blissful marital life with his wife, Denise Walker. Here let’s learn more about Russell Hornsby’s wife and the pair’s love life.

As stated earlier, Russell Hornsby is happily married to Denise Walker. The talented actor met the accounting consultant in 2001 and began dating in 2003. After being in a relationship with each other for five years, the lovely pair tied the knot on August 1, 2008, at the Verandah Resort & Spa in Antigua.

The lovely pair are still going strong in their marriage and are deeply in love with each other.

Russell Hornsby’s wife Denise gave birth to his two sons, Walker Red Hornsby and Ronen Lyons Hornsby. Despite being a famous actor, he has not spoken much about his two sons. But during an interview with Entertainment Inquirer, he mentioned his two sons and the reason behind their names. He explained that he kept his son’s name, Walker Red, from the maiden names of his wife (Walker), and mother (Red).

Similarly, Ronen was the name that his wife came up with and Lyons was the name of the character from Fences. Russell and Denise are raising their babies with great love and care.

Is Active On Social Media

Russell Hornsby’s wife Denise Walker is an accounting consultant who first found fame due to her relationship with the actor. She is active on various social media platforms. Denise has 500 followers on Instagram, and she posts about various issues like the BLM movement, Asian Hate, Covid-19, and various others. She also has a Twitter account with 170 followers, and there, too, she posts about contemporary issues.

We can see that Denise has fewer followers on her social media as she is comparatively less famous than her husband. However, let’s hope that her followers might increase in the days to come.

Aforementioned, Denise Walker’s husband, Russell Hornsby, is a popular actor who has acted in several hits. He has made various public appearances in Red Carpet, award functions, and various other ceremonies and Denise accompanies him to many of them. In 2016, she attended the ‘Fence’ New York screening at Rose Theater with her husband. She was wearing a beautiful black dress for the screening looked gorgeous standing beside her husband.

Despite the immense popularity that Russell has amassed in his career, he prefers to live his life low-key. Similarly, Russell Hornsby’s wife Denise Walker too shies away from the spotlight. Due to this, more information regarding Hornsby and Walker’s love life and their kids are unknown. However, we hope that they are doing pretty well for themselves and will open up about their lives in the coming days.