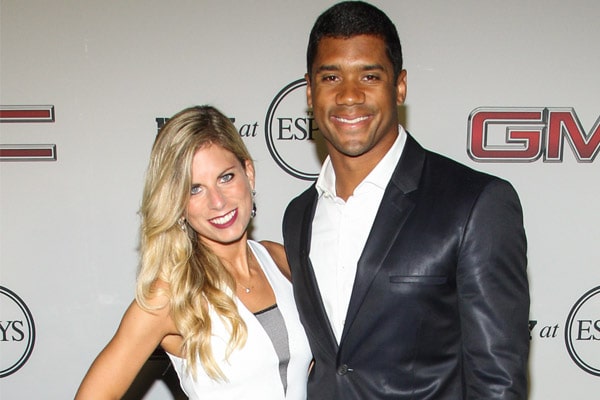 Currently, Russell Wilson is in a happily married relationship with the singing sensation Ciara. But before this, the Seattle Seahawks quarterback Russell was married to Ashton Meem from 2012 to 2014. Russell Wilson’s ex-wife Ashton Meem is an Event planner and a marketing person with a net worth of $4 million.

Russell’s ex-spouse Ashton Meem was not in the limelight after her divorce with Wilson. However, in April of 2020, Meem drew media attention following a tweet from Emmanuel Acho. So, here is more on the American footballer’s previous wife, Ashton, including the rumor of her remarriage.

According to the Celebrity Net Worth, Ashton Meem’s net worth is $4 million. Meem amassed such a huge amount in her asset as an American businesswoman. As mentioned before, she is an event planner and a marketing person. Furthermore, Ashton is an Advertising Operations Assistant at American Family Insurance.

The average base pay of an Ad Operations Assistant is $41, 869 per year. Ashton also receives a similar salary in her profession. Moreover, she also earns additional dollars from her various other endeavors. Plus the divorce settlement with Russell must have also contributed some amount to her net fortune.

as for Ashton’s ex-husband Russell Wilson’s net worth is $135 million as a starting quarterback of the Seattle Seahawks. It might be surprising to say that Wilson is one of the highest-paid athletes in the world. The base NFL salary of this pro-football player is $35 million per-season.

The daughter of Lang Meem and Molly Meem attended St. Catherine High School in 2006. It’s where Russell met his ex-partner Ashton for the first time in 2006. The now ex-pair kept meeting each other and gradually fell in love. The ex-duo kept their love relationship alive over long-distance when their University was different. Later, Ashton transferred to North Carolina State from the University of Georgia to be with Russell.

After graduating from the same University, Wilson proposed Meem with an eight-carat diamond ring in 2010. And without any delay, Meem said a big “YES.” Two years later, the love-birds tied their knot on 14th January 2012 at the St. Stephen’s Episcopal Church. The bride Ashton wore a J. Crew Bridal gown, whereas Russell was in a designer suit. Rev. Louise Blanchard officiated their wedding.

Everything was going well between Ashton and Russell for two years. Ashton used to attend and cheer in all her then-husband Russell’s games. But sadly, the two separated in April 2014. In a statement to the Seattle Times, Russell shared his pain of divorcing his sweetheart. Ashton also felt the same, but both have remained num regarding the reason behind their divorce.

Rumors of Ashton Cheating on Wilson

Soon after the legal split up of Ashton and Russell Wilson, there were rumors all around linking the Seahawks receiver Golden Tate and Meem. Some unknown medias gossiped that Meem was having an affair with Tate and it was the reason for her break up with Russell.

But, Ashton and Tate both denied the romance tittle-tattle. Golden Tate clarified in an interview that he was pointlessly dragged into Ashton and Russell’s issue. Tate added that he had nothing to do with Russell’s divorce. Moreover, he insisted some plain irresponsible media were trying to damage his reputation and attack his character.

Russell Wilson’s ex-wife Ashton Meem still is a good friend of Tate’s spouse Elise Pollard. It certainly makes one suspect the accuracy of the gossips that year.

The pro-athlete Russell is now hitched to singer Ciara since 2016. The couple has a daughter together named Sienna Princess Wilson, and another baby is on the way.  Also, Russell’s wife Ciara, has a son named Future Zahir Wilburn from her previous relationship. Talking about Ashton, she has not remarried.

Furthermore, after the divorce, it seems like Russell Wilson’s ex-wife Ashton Meem decided to stay away from the media limelight. She is not that active in any social media platform as well.