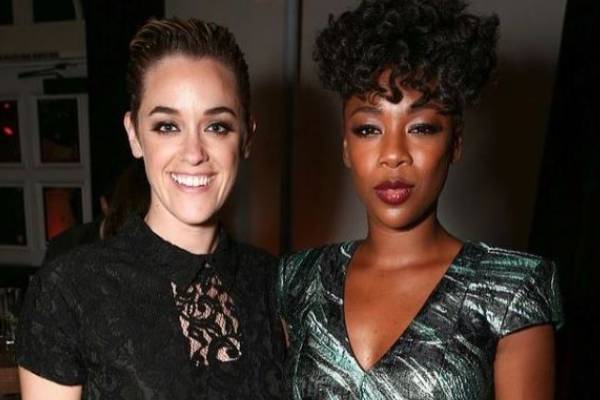 Samira Wiley is an actress from America best known as Poussey Washington from the Netflix series Orange Is the New Black. Apart from this, Wiley has also starred in several other movies and television series, which have helped her gain immense fame and fortune.

In addition to her flourishing acting career, Samira also has a successful love life. She shares a blissful marital life with Lauren Morelli. Due to Wiley’s fame, fans are curious to learn in detail about their relationship.

So, here are some information about Samira Wiley’s wife, Lauren Morelli, their love life, and their kids.

Met While Working On A Show

As mentioned earlier, the renowned actress, Samira Wiley, enjoys a happy marriage with Lauren Morelli. While Samira has gained fame from her role in the series, Orange Is the New Black, her wife, Lauren, was the lead writer of the series. The couple met when they started to film the award-winning show.

While working on the show, Lauren was writing a few scenes for Samira’s character. They were talking about the scene, and the pair felt an instant connection. However, at that time, Lauren was married to writer Steve Basilone and hadn’t realized that she was gay.

According to Insider, Samira and Lauren became friends first because the actress had helped Morelli work through her emotions and feelings regarding her sexuality.

Furthermore, in an interview with Bust in 2018, Lauren Morelli’s wife said that she remembered those first months with her. Morelli was trying to figure out her journey regarding her sexuality, and Samira felt like the writer had picked her as the go-to person.

Samira also added that their connection was not sexual, but something deeply intimate was going on between the duo. Then, in September 2014, Lauren officially ended her marriage and began dating Samira.

After the couple began dating officially in 2014, they realized that they were each other’s persons. So, after a year of being in a relationship, the love birds went to Thailand on their first vacation together. The pair described their vacation as a total disaster, and it was the time when they just exposed everything.

While talking to Out magazine, Wiley mentioned that even though the trip was terrible, it helped her know that she wanted to be with Morelli. She also added that she would rather have the worst day with Lauren than the best day with somebody else.

After dating for two years, Samira Wiley’s wife, Lauren, decided to make a move and proposed to the love of her life in October 2016. The couple announced their engagement via Instagram when Samira shared a photo of themselves with her wearing a sparkling diamond ring.

The pair later talked about their engagement and shared how things rolled out. First, Lauren mentioned that she asked her then-girlfriend, Samira, to sit on the couch but then got her up and began dancing together. Then, Morelli pulled a ring out from behind and proposed to Wiley, to which she said Yes!

In the interview, Lauren Morelli’s wife, Samira, mentioned that she wanted the writer to be the one to propose. This was because Morelli had already been married once, and Wiley wanted her to do it when she was ready. Well, the OITNB star was definitely surprised when her partner proposed.

Nevertheless, the happy couple got engaged and were showered with love from fans and colleagues after the announcement.

Tied The Knot The Following Year

Less than a year later, the adorable pair Samira Wiley and Lauren Morelli exchanged their vows on March 24, 2017. The engaged couple tied the knot in an intimate wedding ceremony in Palm Springs. Plus, exclusive pictures from their wedding celebrations were shared in the Martha Stewart Weddings magazine.

Moreover, Samira Wiley’s wedding to her wife, Lauren, was officiated by her parents. The gorgeous couple wore wedding dresses designed by Christian Siriano, and Wiley changed her look before hitting the dance floor. The pair’s marital life is still going strong, and they love each other deeply.

Furthermore, Lauren and Samira often gush about each other in the media and the social media profiles.

Four years after their marriage, Samira and Lauren welcomed their daughter, George Elizabeth, on April 11, 2021. The duo announced the birth of their baby girl via Instagram. However, the couple has not revealed much about their little girl.

Despite being celebrity figures, the duo kept their pregnancy a secret. As a result, the news about the birth of their daughter was a big surprise to fans. Moreover, Samira Wiley’s wife, Lauren, was the one who gave birth to their little one, as revealed by the talented actress herself.

The adorable pair of Lauren and Samira deeply love each other, and the addition of their young daughter has expanded their family. We hope that their marital life remains the same forever and they live a blissful life together.