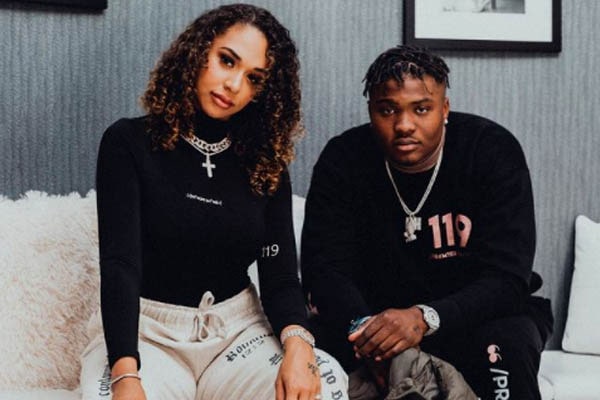 Dwayne Haskins Jr., who went by the moniker Simba, was a famous American football quarterback, currently signed with the NFL’s Pittsburgh Steelers. Previously, Haskins was signed to Washington Redskins. Redskins drafted him in their first round of the 2019 NFL draft, where he performed well. However, during the 2020 season, Haskins was fined several times for not meeting the team’s standards off the field, and eventually Redskins released him.

The star quarterback Dwayne Haskins Jr. began dating Savhana Arai Cousin in early 2016. Though the exact time and how the couple met is still a mystery to everyone, they often shared pictures with each other in the past.

In 2018, Dwayne Haskins Jr. shared a photo of his girlfriend, Savhana Arai, with a heartfelt message for her on his Instagram. He wrote:

You’re the flower that I gotta protect.. happy 2 year anniversary to my love @savhana_arai many more to come. I’m so glad to have you in my life, let’s conquer the world together.

Moreover, Dwayne Haskins Jr.’s girlfriend, Savhana, also did not miss out on the chance to show her love for her boyfriend during his play with Ohio State. Cousin wished Dwayne good luck in his camp and expressed how proud she felt after he went on to have a record-setting campaign in 2018.

Furthermore, Dwayne Haskins Jr. and his beau, Savhana Arai, attended various public events together since they started dating. One of the biggest fans of Disney’s The Lion King film, Dwayne Jr., even took his girlfriend, Savhana, at the world premiere of its re-make in 2019.

However, the beautiful couple, Dwayne and Savhana, separated and moved on with their respective lives. While Arai seems to be enjoying her time as a single woman her ex-boyfriend got married to Kalabrya Gondrezick.

Dwayne Haskins Jr.’s girlfriend, Savhana Arai Cousin, is also a former high school basketball player. She played on the girl’s basketball team covered by MaxPreps. According to her profile, she played only during her junior years from 2014 to 2016 and discontinued playing later.

After graduating from Fermont Ross High School in 2016, Savhana Arai Cousin enrolled at the University of Cincinnati.

Cousin Is A Founder Of A Clothing Brand

The gorgeous girlfriend of Dwayne Haskins Jr., Savhana Arai Cousin, is currently an entrepreneur and an Instagram model. Arai is the founder and owner of a clothing company named Premiere 119. Savahana’s boyfriend, Dwayne Haskins Jr., also often helps her in branding her company’s products. Although Cousin had planned to release her clothing brand on 16 March 2020, her team postponed it later due to the then-ongoing coronavirus pandemic.

Currently, Savhana Cousin, who has over 17.8K followers on her Instagram, does not appear in public together with her boyfriend. However, we hope the privacy-loving pair will soon come out together in media like before and put the rumors about their breakup to rest.

After separating from Savhana, Dwayne found love again and got married. The NFL star reportedly tied the knot with his girlfriend of one and a half years, Kalabrya Gondrezick-Haskins on March 19, 2021.

However, according to Haskins’ Instagram, the pair got engaged at TAO Asian Bistro & Nightclub in July 2021. But Kalabrya revealed that they were already married and were planning to renew their vows.

Moreover, on July 25 it was reported that Gondrezick-Haskins was charged with battery and domestic violence. She apparently punched Dwayne in the mouth after a  disagreement and a piece of his tooth was found on the floor of their room.

The Haskins couple was attending a friend’s wedding in Las Vegas while the incident occurred. Kalabrya Gondrezick-Haskins was arrested by police officers and is set to appear in court on August 3.

Sadly, Savhana Arai Cousin’s ex-boyfriend, Dwayne passed away on April 9, 2022, after being struck by a truck. He was walking on a South Florida highway when the accident happened.

Haskings’ wife and his ex-girlfriend have not spoken up about the tragedy yet. But we wish the grieving family all the strength and hope the deceased finds peace.