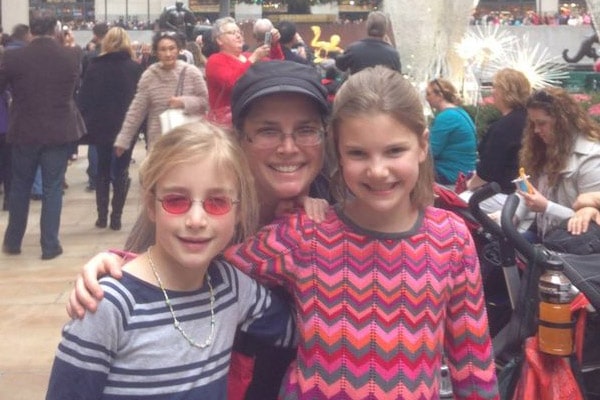 The son of American violinist Isaac Stern, Michael Stern, is an American symphony conductor. Stern works as the music director and the Kansas City Symphony’s chief conductor in Kansas City, Missouri. Before Symphony, he was the conductor of the Orchestre National de Lyon in France. During Stern’s tenure in Orchestre National, he appeared with orchestras in Paris, Lille, Bordeaux, and other European places.

Michael Stern is a family man. He took the wedding vows with Shelley Cryer in 2006, and the two have been together since then. Here, meet Michael Stern’s wife, Shelly Cryer, and indulge yourself in some of her unknown facts.

The married life of Shelly Cryer and Michael Stern has crossed a decade mark. And, they are enjoying their marital life to the fullest with love and care for each other.

The jolly couple, Michael and Shelly, are proud parents to two beautiful daughters. Shelly welcomed her first child, Hannon Stern, in 2007. Similarly, the duo gave birth to their second daughter, Nora Stern, in 2009.

Shelly and Michael have kept the details about their gorgeous children entirely away from the media reach. Well, Michael rarely talks about their daughters in public, and his wife often shares their photos on her Facebook.

Part Of A Musical Family

The native of Greenwich, Connecticut, Shelly Cryer, cannot sing in tune, does not play an instrument, and says that she has zero musical talent. However, she is a part of a musical family and is involved in the music industry differently.

Aforementioned, Shelly’s long-time husband, Michael Stern, is an American Symphony Conductor. Stern’s tenure in the Symphony started as a music director designate in 2004. Shelly’s partner is also the founding music director of the IRIS Orchestra in Germantown, Tennessee. Moreover, he guest conducts for orchestras throughout the United States, Europe, and Asia.

Similarly, Shelly’s father-in-law, Isaac Stern, was a famous American violinist of his time. He was the Grammy winner for his work with pianist Eugene Istomin and cellist Leonard Rose. In honor of Isaac Stern, a street in Tel Aviv was named for him in 2012.

Michael Stern’s wife, Shelly Cryer, is not a famous musician like her husband and father-in-law. However, she is also one of the essential contributors to classical music in the United States. Cryer is the producer of a series of free classical music concerts for Greenwich families, Curiosity Concerts.

Shelly’s Curiosity Concerts was a series of free, family classical music concerts at different venues in the Greenwich area. The concerts were performed by professional musicians in 2014 and even featured a trio of crazy-talented musicians, Sonic Escape.

Her Daughters Are Also Emerging Musicians

Growing up in a musical family, Shelly and Michael Stern’s daughters also grew interests in music. Inspired by their mom and dad, Michael’s little princesses have composed a couple of songs on their own.

Recently amidst the COVID-19 pandemic, Hannon and Nora composed a modification of Maroon 5‘s Girls Like You with their own words. They opened up about the boredom that they felt during the lockdown resulted by Coronavirus. Moreover, Michael’s kids also conveyed some message to stay safe from the virus via their composition.

The beautiful lady of Michael Stern, Shelly, is actively involved in the welfare of human kinds. She is popular among the people of the Greenwich area for her philanthropic works.

Humanitarian Shelly often donates to the fundraiser conducted by her friends and family members. Moreover, she seems to be actively involved in helping and raising the lifestyle of Afgan refugees. Cryer regularly posts updates encouraging her Facebook friends to buy the handmade products of Afgan refugees.

Besides being a contributor to classical music, Michael Stern’s wife Shelly Cryer is also an author. She wrote the book ‘The Nonprofit Career Guide: How to Land a Job That Makes a Difference‘ in 2008.

Shelly’s book is a must-read for those who are hoping to launch a nonprofit career. The Nonprofit Career Guide is full of practical advice from real people working at diverse nonprofits.