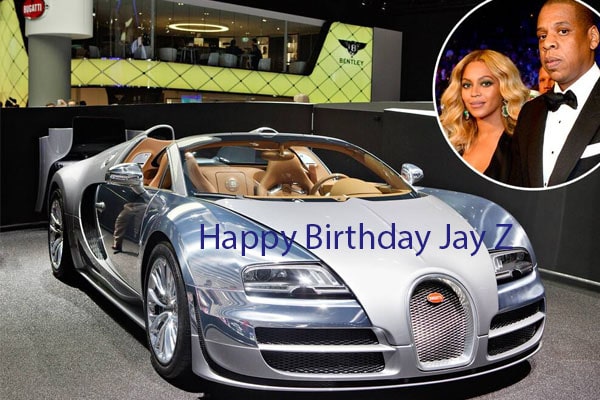 Celebs are some of the wealthiest people in the world, and many are millionaires. However, they are also generous enough to share their wealth, often with friends and family members. This means that they often end up spending quite a bit on their loved ones.

There are some celebrities, though, that take things to a whole new level. Take a look at this list to find out some of the more outrageous things that famous people have gifted one another.

When you are the ultimate power couple, you can’t afford to be cheap with your gifts. This is probably why Queen Bey decided to gift her hubby a Bugatti Veyron for his 41st birthday. The car reportedly cost her a cool $2 million.

Of course, the present was rather touching considering that Jay Z is a renowned car collector, with a seriously impressive collection. Undoubtedly, though, the Veyron quickly became the crown jewel, considering that it is one of the fastest cars in the world!

What do you think could be better than a bottle of wine? Well, an entire winery apparently. This is precisely what David Beckham gifted his wife Victoria. Now, this wasn’t just any old winery, though, and was purchased in the famed Napa Valley vineyard.

There are no reports as to just how much this particular present cost but given its location, many guess that it is in the seven-figure range! In case you can’t afford such a present for your loved one, you may want to check out Gift Rep for some inspiration. It may not be a vineyard but it’s still sure to be something.

Kanye West and Kim Kardashian are no strangers to giving extravagant gifts. This time, though, West may have outdone himself when he presented his wife with a condo in one of the most exclusive buildings in Miami as a Christmas present.

So, what did this display of love set him back? Well, a little bit of research shows that he spent around $14 million for that apartment! The condo has four bedrooms and five and a half baths. There is also a swimming pool, spa, and gym on site as well.

It is one thing to buy someone a present when there is an occasion, it is quite another to spring one out of the blue. Well, this is exactly what Angelina Jolie did for her then-husband several years ago. Her “just because” gift was in the form of a helicopter. Reportedly, this impulse purchase cost her around $1.6 million.

As you can imagine, there is little use in having a helicopter if you don’t know how to fly it. Jolie had the same train of thought which is why she went one step further and splurged on flying lessons for Pitt as well.

When most people think of a promise ring, they imagine a plain band with virtually no bling on it. Well, it turns out that Tyga had a very different idea of what this kind of ring might mean. So, when he presented his ex-beau Jenner with one, it was decked out with jewels.

It is estimated that the ring cost over $30,000 dollars. Unfortunately, the price tag on the ring wasn’t enough to keep the pair together. However, it is fun to estimate what a potential engagement ring between these two would have cost!

For someone who sang about how her love doesn’t cost a thing, J.Lo has received a slew of presents from the men in her life. The one that really stands out, though, is the jewelry gifted by her ex-husband Marc Anthony. The singer gifted the extravagant baubles as a “push present” after the couple’s twins were born.

So what was this labor of love? Well, first came the ring that reportedly cost around $300,000 dollars. This was followed up by a pair of earrings that apparently had a price tag of around $2.5 million. And if this wasn’t sweet enough, the earrings were engraved with their babies’ names.

Adam Sandler’s production company was at the helm of the Grown Ups movie, which achieved great success. The movie made close to $300 million worldwide. To show his appreciation for all the great work that his cast mates had put in, Sandler gifted Chris Rock, Kevin James, Rob Schneider, and David Spade Maserati cars!

As you can imagine, these gifts added up to quite a bit. Considering the market value of the cars at the time, it is estimated that Sandler spent around $800,000 on them all. When you think about how much the movie raked in though, this was chump change.

Katy Perry got her then-husband Russell Brand a present that was truly out of this world. The pop singer bought her hubby a trip to outer space courtesy of Richard Branson’s Virgin Galactic. It was meant to be an exciting gift for the comedian’s 35th birthday.

The tickets were going for $200,000 which means that this was a very costly and impressive gift indeed. Unfortunately, it appears that this particular present wasn’t exactly a good omen. Not only did Brand and Perry end their marriage not long after, but the primary trip of the Virgin Galactic trip crashed as well. It is unclear whether Brand will go on the next one.

Jude Law to Sienna Miller – Grand Piano and a Ring

There is no denying that trying to reconcile a relationship after infidelity means lots and lots of presents. The unfaithful Jude Law clearly got the message as he was in the process of patching things up with his fiancée. Sure enough, Miller received her very own Grand Piano for Christmas.

It turned out, though, that the piano was just the beginning. Once she opened the piano lid, she found a small jewelry box with a sapphire diamond ring nestled inside. Apparently, the ring cost around £130,000. As fate would have it, though, not even such an expensive gesture could repair the relationship for long. The two actors eventually split up.

If you had a top-earner like Lady Gaga on your hands then you would probably be heaping presents on her as well. So, it came as little surprise to find that Interscope Records – the label that Gaga signed with – made the ultimate gesture. They presented the pop queen with her very own white horse.

The present wasn’t just extravagant, it was also very thoughtful. Lady Gaga has always loved horses and even owns properties with horse farms and stables. It really was the perfect present for the megastar.

You can’t give one person a gift and ignore her best friend! Well, that’s the conclusion that Tyler Perry came to, at least. The multi-talented individual gave both Oprah and her best friend, Gayle a Bentley each. Best of all, there was no reason for it.

Apparently, the present was so sweet that it stunned even Oprah – one of the world’s most well-known gift-givers. It was made all the more wonderful by the fact that she could share this moment with her gal pal as well. Those who knew Perry put this down to just another nice gesture from a guy known for his charitable nature. Not that Oprah needs it, of course!

What would you do if your bestie told you she was thinking of taking up cycling in her spare time? Well, if you are anything like Courtney Cox, you would go out and buy her a bicycle. Now, when your best friend is Jennifer Aniston, any old bike will not do. This is why Cox got her an extra-special one.

According to reports, Cox had the bike’s seat specially made by Chanel along with a few other accessories to deck it out with. All that generosity ended up costing the former Friends’ star around $12,000. Hopefully, Aniston made good use of her extravagant gift!

It is clear that celebs really know how to give a gift – whether there is a reason for it or not! Not to mention, some of these presents are downright outrageous. Therefore, it really does pay to be the BFF or loved one of someone famous.

In Hollywood, relationships and friendships are never certain. The one thing you can be sure about, though, is that you will be decked out with gifts even when you can’t afford expensive presents for yourself! It sure is good to be rich.

Stay with Ecelebrity Mirror for more updates  on celebrity entertainment.