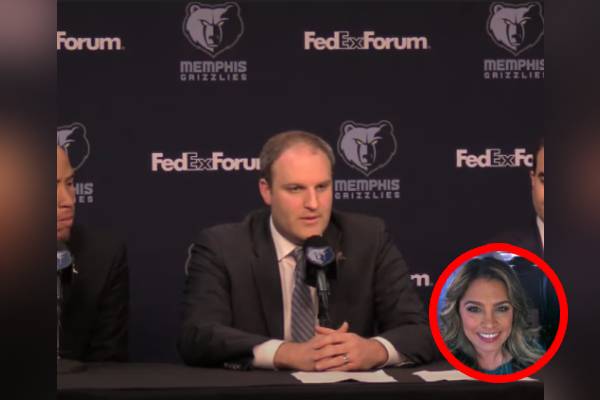 Taylor Vetter Jenkins, simply Taylor Jenkins, is a professional basketball coach who is serving the Memphis Grizzlies of the NBA as a head coach. He joined the Grizzles in 2019 and won the Western Conference’s Coach of the Month in January 2020 and December 2021.

The 37-year-old is the second-youngest coach in the NBA and is the only one who did not play collegiate basketball. He enjoys a blissful life with his spouse and children. Many fans must be curious about his family. Hence, today, we will be knowing more about Taylor Jenkins’ wife, Chantall Jenkins, and their married life.

The NBA coach’s spouse is none other than Chantall Lissette Jenkins or Chantall Jenkins. As per her LinkedIn profile, Chantall attended the University of the Incarnate Word. She graduated from the college with a bachelor’s degree of science in business administration and marketing.

Mrs. Jenkins worked as a front desk agent at El Caney Guest House in October 1999 and has worked various jobs ever since. For instance, she served at the Banana Republic as a sales associate, World Savings as a loan processor, and as a loan origination specialist at the United Services Automobile Association.

Unfortunately, we could not find how the couple met and when they got married. It seems that the husband and wife are private people, seeing how they have kept their marriage details confidential. Even Taylor Jenkins’ wife’s Instagram account has been switched to private. Maybe the duo enjoys spending time with their friends and families and wants to stay out of any spotlight.

Taylor Jenkins’ Wife Is A Mother Of Four

Chantall is a loving mother to her four children; three sons and a daughter. The thing to be noted is that two of her eldest sons are from her previous marriage. Well, there isn’t any information about her former husband.

Taylor is very understanding and accepting of his stepsons. As per The Ringer, his two eldest sons, who are college-aged, “keep him in touch” with the current generation.

Unfortunately, Chantall and Taylors’ children’s names have not been disclosed except for one. Taylor Jenkins’ eldest son is Alberto Jenkins, who is in his mid-twenties. Well, we can only hope that the Jenkins pair would reveal more information about their kids.

Taylor and Chantall Jenkins’ oldest son was arrested and charged with one felony count in March 2021. According to legal documents acquired by The Commercial Appeal, he filed a false offense report about being kidnapped and robbed by four men that approached him.

Alberto claimed that one of them was armed. He was allowed to leave, but the attackers took his car, phone, and $750 cash. When asked about it, he couldn’t show the police where he was dropped off. The cops found a few inconsistencies in his stories and confronted the young guy about it. Eventually, he admitted that he had lied.

The young man later confessed that he was looking to buy cocaine from a group of men. But when they took him around with them to look for the drugs, the coach’s son “became scared and abandoned his vehicle and property, leaving in possession of those unidentified males.

Alberto, who is Taylor Jenkins’ wife’s son from her previous marriage, was later granted a release shortly after posting bond and was scheduled to be put on a trial on June 15, 2021.

Still, from what we know, Taylor is living a blissful life with his wife and kids. We wish the Jenkins family more prosperity ahead.