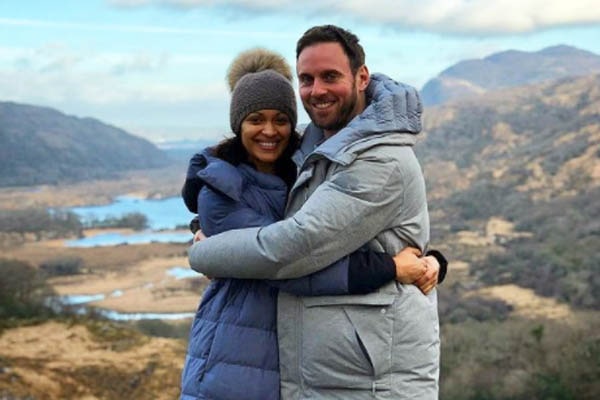 Cynthia Addai-Robinson is an acclaimed English-born American actress famous for portraying the role of Naevia in the TV series Spartacus. Also, she is popular among her fans for playing DC Comics character Amanda Waller in Arrow and Nadine Memphis on the USA Network series Shooter. Besides, Cynthia Addai-Robinson’s other acting credit includes films and video games like The Accountant, Stumptown, and Lego Batman 3: Beyond Gotham.

The beautiful and versatile actress Cynthia Addai-Robinson’s relationship with Thomas Hefferon seems to have started at the beginning of 2018. They dated secretly for a while till Cynthia Addai-Robinson’s boyfriend, Thomas Hefferon, posted her photo on his Instagram, mentioning her as his love. The public became clearer when Cynthia commented on his post, saying that her smile can’t be contained around him, and ended her comment with a love emoji.

Cynthia Addai’s beau, Thomas Hefferon, often posts photos of him with Cynthia on his social media pages. He never hesitates to exhibit his love for his girl via his posts. We might not have known that they are already married if he hadn’t shared some photos of their wedding day. Yes. You heard it right. The beautiful couple took wedding vows amidst the COVID-19 pandemic in the summer of 2020. Now, Thomas Hefferon is officially Cynthia Addai-Robinson’s husband.

Furthermore, though Thomas Hefferon is open about his relationship, Cynthia prefers to keep it private. She rarely posts pictures of her better-half, Thomas, on her social networking handle’s wall. However, we hope she will share some details on her relationship shortly when the right time comes.

Thomas Hefferon Is A Director

Cynthia Addai-Robinson’s husband, Thomas Hefferon, is also in the show business. Though he does not have any acting credits to his name like his celebrity wife, Hefferon is a self-taught director. Born in London but raised in Dublin, Ireland, Thomas grew up with a passion for storytelling and the moving picture.

Thomas Hefferon’s first short film, “The Confession,” presented at over 40 International Film Festivals, had a national cinema release in Ireland. Also, it aired on dozens of TV stations worldwide and garnered over a million hits on YouTube.

Since the success of his first creation, Thomas has directed many more short films, including The Pool, Switch, and The Heist. The Irish Film Board funded all of them. Hefferon’s short films have now played at over 100 major international film festivals, gaining several awards along the way. Some of the festivals in which his films were played include the Palm Springs Int’l Film Festival, Tribeca Film Festival, and many others.

After being the nominee of the Best New Director at the Kinsale Shark Awards, Cynthia Addai – Robinson’s husband, Thomas, recently focused on directing TV Commercials. He prefers to address himself as an Irish filmmaker who is living the dream.

Currently, Cynthia Addai-Robinson and her boyfriend-turned-husband, Thomas Hefferon, reside together in Los Angeles, California. And, they are very happy and content with their relationship as husband and wife. We hope their bonding remains strong till the end.