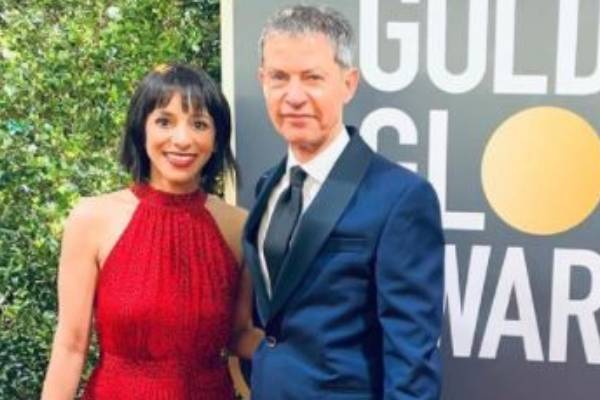 Ellen DeGeneres is one of the most reputed names in Hollywood. Her talk show, The Ellen DeGeneres Show, is listed among the highest-watched shows on American television. All thanks to the fame that she has gained, her family members have also come into the limelight.

One such name that came into the limelight is Vance DeGeneres, who is the older brother of Ellen. Furthermore, he has also gained fame from his works in the entertainment industry and is establishing himself as an actor, producer, screenwriter, comedian, and musician.

As mentioned earlier, Vance DeGeneres has been married since 2013. He shares a beautiful marital life with his wife, Joanna DeGeneres. The couple met almost two decades ago and have been together to date. However, the duo has not revealed how and where they first met.

The lovely duo decided to take their relationship to the next level and got married privately on August 17, 2013. The wedding was held at Ojai Valley Inn & Spa with a handful of close friends and family. According to Radar Online, only 15 to 25 people had attended the wedding, and they were served vegan wedding cake.

Moreover, Joanna’s husband, Vance, and her sister-in-law, Ellen, apparently got into a vocal fight in front of all the guests. The talk show host had reportedly insisted on paying for the wedding. But the groom was uncomfortable with the idea. Apart from this small tiff, their wedding concluded without any hitch.

It has been eight years since Vance and Joanna tied the knot, and they both love each other profoundly. Moreover, the lovely couple often professes love for each other on social media.

While Vance is Joanna’s first husband, many might not know that this was not the first marriage for Ellen DeGeneres’ brother. Before tying the knot with Joanna, he was married to Mimi DeGeneres. The former couple was married for a year from 1990 to 1991.

Nonetheless, it looks like Vance DeGeneres’ second chance in marriage is extremely successful.

Also Read: Know Who The Lover Of Station-19 Actress Barrett Doss Is.

Just like him, Vance DeGeneres’s spouse, Joanna Brooks, is also involved in the entertainment industry. But, while her husband works in front of the camera, she currently makes a living staying behind the camera. She is a well-known headshot photographer based in LA.

Vance’s wife, Joanna, holds a B.F.A. in Fine Art – painting and drawing from Michigan State University. After pursuing her undergraduate studies, she enrolled at the University of Washington’s Professional Actor Training Program (PATP) and got her MFA.

After completing her studies, Joanna moved to Los Angeles in 2002 and quickly picked up the camera. She began shooting headshots in LA at the time when the industry switched to color digital from black and white film.

As of now, she has shot over thousands of headshots of famous people and brand new actors. The Ellen DeGeneres Show, People Magazine, The New York Times, and several other online publications have featured her photos. The photographer shoots with Canon r5 and has uploaded her works on her social media page.

Furthermore, Vance DeGeneres’s wife even has her own website, where she has featured her work. Not only that, she has a YouTube channel named Joanna DeGeneres Photography. She must be earning significantly as a headshot photographer, thus affording a comfortable lifestyle.

Previously Worked As An Actress

Before pursuing photography as her full-time career, Vance DeGeneres’s life partner, Joanna Brooks, was an actress. As mentioned earlier, she moved to LA in 2002 after completing her studies. There she pursued acting in addition to working behind the camera.

As per IMDb, Joanna has worked on Crazy, Stupid, Love and made an appearance as Valerie in How I Met Your Mother. Although she does not have many credits as an actress, she has gained significant credits in the casting department.

While working as an actress, Joanna also worked as an associate and assistant in a casting office. There she had the experience of looking at many headshots and also sitting in on incredible auditions. Although she is a full-time photographer now, she still loves acting and utilizes her skills while capturing her shots.

Joanna and Vance share a common interest in entertainment, which might be one of the topics they bonded over. The couple is now enjoying their time together but is yet to welcome kids.

However, they seem to have fulfilled their family for now by adopting a dog, whom they have named Taters. Hopefully, we get to hear some good news regarding their family life real soon.

Moreover, Joanna seems to be doing great for her, and we hope to see Vance DeGeneres’s wife succeed further in her work.