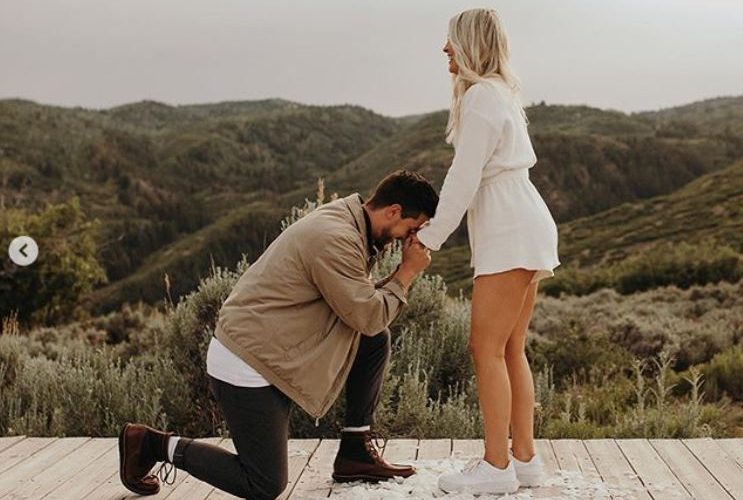 Whitney Simmons is a fitness mogul and content creator who rose to fame through her YouTube channel. Whitney, who was born and raised in California, started her YouTube journey in 2016. Her self-titled YouTube channel exhibits a huge passion for fitness and living a healthy lifestyle.

Whitney currently has 1.99m subscribers on YouTube, followed by 3.1m followers on her Instagram account. The 27 years old fitness freak got engaged recently amidst this Covid-19 craziness. To know more about her engagement and fiancé, make sure to stick to the end of this article.

Whitney Simmons recently got engaged with her long term boyfriend, Stefan, in June 2020. She had let her fans witness some glimpses of her special day by dropping a video on her YouTube channel. Stefan proposed her on a mesmerizing mountaintop accompanied by sunset. Whitney’s fiance planned and brought off the proposal really well. He did it with the help of some of his close friends who were also present during the proposal. Whitney had also made a YouTube video regarding her gut feeling about the proposal to be happening soon.

The engagement was a visual treat with paths covered by petals, sunset, and most particularly due to the hidden fireworks. Stefan proposed Whitney with a ludicrously expensive-looking diamond ring with a knee down. The ring was made at J. brook’s jewelers. The special moments were captured by videographer Derek Copenhaver and photographer Jordan Voth.

Who is Whitney Simmons Fiancé, Stefan?

As one might guess, Whitney Simmons’s soon-to-be husband Stefan is also interested in fitness. In fact, the two first met in a gym through a mutual friend. Whitney had shared a photo of Stefan in her Snapchat story calling him ‘the hot guy from the gym.’ This Snapchat story is what led Stefan to ask her out and hence their first date. While Stefan has a professional model physique, he is actually engaged in a scholarly field and likes to keep this profile low on social media.

Although we don’t know much about him, Stefan is a computer engineer graduate with honors. Whitney revealed this in one of her Q&A videos. As we already mentioned, Stefan likes to have a low profile; we can only patiently wait for further information about his personal and professional life to come out.

Do Whitney and Stefan Have Any Plans For Marriage?

Since marriage is the next step after the engagement, anyone would guess Whitney and Stefan fall under the same hood. Stefan is also well-liked by Whitney’s parents, which reinforces the likelihood of the couple getting married anytime soon.

The couple has revealed that they have already set their wedding date, but further plannings are yet to be made. The availability of their photographer Jordan Voth was a major concern while fixing the date. Whitney also mentioned that the two will have their wedding in about a year from their engagement, so it seems like her fans should take their calculator out.