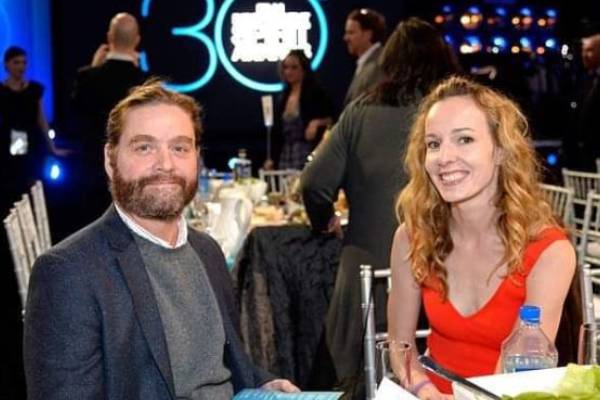 Quinn Lundberg and Zach Galifianakis have been married for almost a decade. Image Source: The Industry Blast's Instagram.

All The Hangovers fans around the globe might have heard the name Zach Galifianakis, born Zachary Knight Galifianakis. The talented 52-year-old has acted in some of the enormous movies in Hollywood. His notable works include The Hangover trilogy, Masterminds, and Birdman.

Zach began his acting career from the small screens appearing on Boston Common in 1996. However, he finally had to wait three years to make a debut on the big screen. Galifianakis played the role of a pathetic guy in his first movie, Flush, in 1999.

Since then, he has even won the MTV award for best comedic performance for his role as Alan Garner in The Hangover.

Besides movies, Zach is a lovely husband and father to his two kids. He has been married to his partner, Quinn Lundberg, since 2012. So, in today’s article, we will be talking about Zach Galifianakis’ wife, Quinn Lundberg, her personal life along with her charitable works.

Zach Galifianakis’ Wife Is From Canada

Zach Galifianakis’ partner, Quinn Lundberg, was born in Edmonton, Alberta, Canada, in 1983. Quinn belonged to a middle-class family and was passionate about dancing from a young age. Quinn completed her high school education in Canada and moved to the United States for her further education.

After moving to the US, Lundberg joined Hunter College and completed her bachelor’s in International Conflict Resolution. Furthermore, she went to the famous UCLA to earn her masters’ degree in Public Policy.

Zach Galifianakis and Quinn Lundberg got married in August 2012 in a private ceremony held in Canada. The love birds met while Quinn was a student. They dated for a brief period before marrying. In addition, the pair are also proud parents to two sons.

Jared Leno the couple’s eldest child, was born in 2013. Their child’s name is a cross paying homage to Jared Leto and Jay Leno. Following Quinn’s first child delivery, her husband Zach skipped the Toronto International Film Festival. He wanted to be with his wife during the birth of their kid.

Neither Quinn nor her husband Zach is active on social media. In fact, Quinn does not even have a social media account across any platforms. It seems she enjoys living her life away from the press. Even though, being a celebrity wife, she does not like limelight upon herself and her family.

She Runs Her Own Charity

After completing her education, Zach Galifianakis’ wife, Quinn Lundberg, volunteered for the UNICEF as a member of their web production unit. After volunteering for the UNICEF, she developed a passion for helping others and those in need.

Substantially, she visited many third-world countries and came up with the idea of starting her charity. So, she co-founded Growing Voices Charity with her former classmate, Melissa Leschuck. The organization aims to help underdeveloped communities by empowering the people.

In close, the charity looks to work with local business owners. It wants to help the local business owners so that their businesses stay sustainable in the long run. Her organization is also partnered with DANA, a company that serves the victims of domestic abuse. In addition, the company is associated with several NGOs. Its mission is to promote rural education in Malawi.