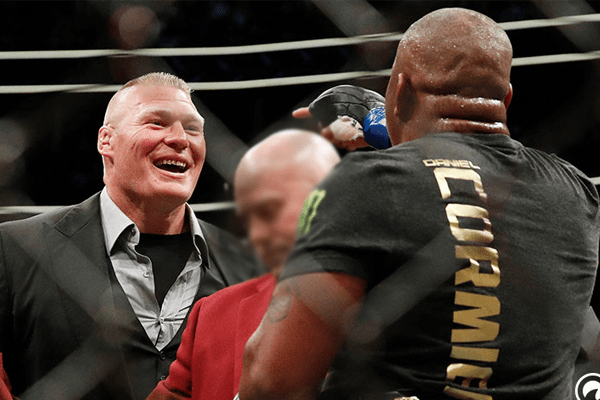 The confirmation came last Saturday as UFC hosted its big pay-per-view event UFC 226 at the T-Mobile Arena in Las Vegas, Nevada. The event was headlined by the heavyweight battle of Stipe Miocic defending his heavyweight title against the reigning UFC Light Heavyweight Champion Daniel Cormier. A certain beast named Brock Lesnar was seated in the front row and was looking on closely.

As Cormier knocked out Miocic within 4:33 of the very first round to become a double champion, he invited Brock into the Octagon. Brock happily obliged and as soon as he entered the Octagon, he shoved the newly crowned heavyweight champion. They had a heated exchange as they were being held back by security. Brock then got on the mic and trashed the UFC heavyweight division along with the likes of Stipe Miocic and Francis Ngannou. he ended it by threatening DC with some choice words, “DC, I’m coming for you motherf***er!”

Later in the post-show press conference, UFC President Dana White confirmed that Cormier would be defending his newly won championship against Lesnar at a later date. This whole confrontation seemed scripted and looked like it came straight out of WWE’s book, which Cormier simpling taking a shove from Lesnar without retaliating and Joe Rogan and Dana While grinning as Lesnar trashed the UFC fighters. But all can be forgiven as it has created a buzz around Brock’s return to the UFC.

When Will The Fight Take Place?

So with Brock’s return to UFC confirmed, it has led to speculation as to when the bout with Cormier for the belt will take place. Before UFC 226 started, Journalist Jeremy Botter tweeted out that Brock will face the winner of the main event at the November show in Madison Square Garden.

But there are a few complications for that to happen. Brock is currently contracted to WWE and still has one match left in his contract. More importantly, he is the current WWE Univeral Champion. WWE surely won’t let their champion compete in the UFC while still holding the belt. So he’ll have to drop the belt to somebody before joining the UFC.

But the bigger issue is the fact that Brock still has to serve 6 months of his US Anti-Doping Agency (USADA) ban he received after failing a drug test during his last fight against Mark Hunt in 2016. He only served 6 months of his one year ban before leaving the USADA testing pool in February 2017. He will have to serve the rest of his ban to able to fight DC.

Dana White, however, confirmed that Lesnar re-entered the testing pool last week, reportedly on July 3, meaning he would be able to fight in the UFC by early January of next year. this would still rule out an MSG showdown between DC and Lesnar. This would mean that the would most likely face-off in January next year.

However, Jeremy Botter further explained that Brock is already in the testing pool and it has been hidden from the public in USADA’s database. This would mean that DC vs. Lesnar could very well happen at UFC 230 at Madison Square Garden on November 3, 2018.

This is true, from what multiple sources have told me. Lesnar is in the pool and is hidden from public viewing in their database. https://t.co/ivnrKBQEt9

This whole chain of events has led to a great deal of interest in what happens next in regards to Brock Lesnar and the UFC. However, it is certain that Brock will step into the Octagon in the near future.

Follow eCelebrityMirror for more on the latest Sports News.  ,