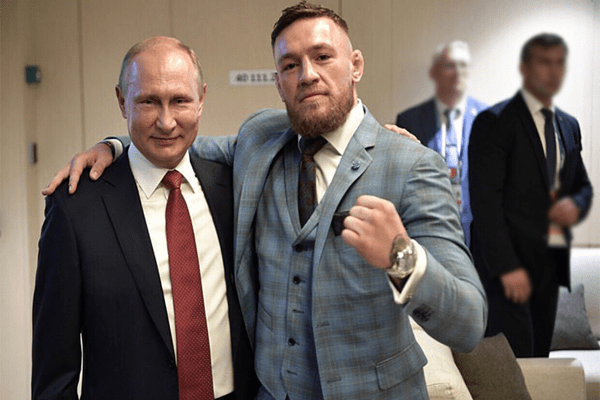 Looks like the 2018 FIFA World Cup final has given us a pairing we never thought we would see. That pairing is none other than that of Russian President Vladimir Putin and Irish UFC fighter Conor Mcgregor as the two were seen together during the final between Croatia and France.

Conor attended the final on the invitation of Putin himself. Putin and Conor were seen talking together after the game and even clicked a few pictures together. McGregor was full of praise for Russian president Putin, calling him “one of the greatest leaders of our time”. This had led us to believe that the two are very good friends.

Conor posted a picture of himself watching the final on his Instagram account. He was seated in the VIP section and was enjoying the game while having a plate of pasta as seen in the photo. He called watching the final “a truly amazing spectacle”.

Mcgregor later, again on his Instagram, posted pictures of him with the Russian president himself. He stated in the caption that he was proud to be invited by Putin to watch the game. He praised Putin, who has dropped to the second position in the world’s most powerful person’s list by Xi Jinping, as one of the greatest leaders of our generation and also congratulated him on a successful World Cup.

Later, footage emerged of the two talking together and having a humorous conversation. Conor shook the hands of other Russian officials along with Putin. The two heavyweights posed for a quick photoshoot.

This hospitality showed by Putin towards Conor is an indication that the two are very close to each other. Not only was Conor invited to the VIP section to watch the match, he also got to meet Putin in person and have a conversation with him, suggesting there is a strong bond between the two. If that is the case, Conor has found a powerful person as his friend.

Conor isn’t currently fighting for the UFC after he attacked a bus containing many UFC fighters, leading to many of them being injured. He is expected to return to UFC in early January next year.