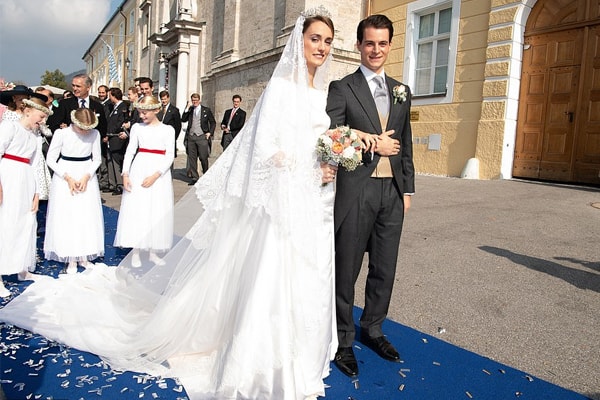 Royal Weddings has been a grand feast this year from Meghan Markle and Prince Harry’s magical wedding in May to Princess Eugenie’s wedding to Tom Brookbanks in October. Duchess Sophie of Wurttemberg tied the knot to Count Maximilien of Andigne in a beautiful ceremony in Germany. Duchess Sophie’s wedding dress was supposedly inspired by the royal weddings of Megan and Duchess of Sussex.

Markle’s wedding had the classic trend and her custom created a dress by Clare Waight Keller had given a nod to a 1950s film actress Audrey Hepburn. Sophie’s gown was slightly different as the German Duchess’s neckline was not as wide as Markle’s which had exposed a bit off her shoulders. The gown was a slim column design in contrast to the A-line silhouette of Megan’s wedding gown. The royal wedding of Markle had overshadowed her ex-husband Trevor Engelson’s engagement to his soon to be wife Tracey.

Duchess Sophie of Württemberg wore a white belted column gown with train overlay, three-quarter sleeves, and a bateau neckline. Her looks were coordinated with short lace veil and a stunning diamond crusted tiara. While the UK has been delighted with the news of Harry and Meghan’s joy of forthcoming parenthood, Europe celebrated the aristocratic marriage of Duchess Sophie and Count Maximilien d’Andigne at the Castle of Tegernsee.

According to Daily Mail, the couple is descendants of the former royal family of the Kingdom of Wurttemberg which has existed from 1805 to 1918. Duchess Sophie’s dress was similar to Princess Anglea as both dresses had bateau necklines held to the modern aesthetic. Megan’s neckline was wide than Angela and accessorized with tiaras worn back on their head and flowing their veils. It might be a coincidence that the Duchess Sophie’s Wedding Dress was similar to Princess Meghan Markle and Princess Angela of Lichtenstein.

Ecelebritymirror for more News and Entertainment.