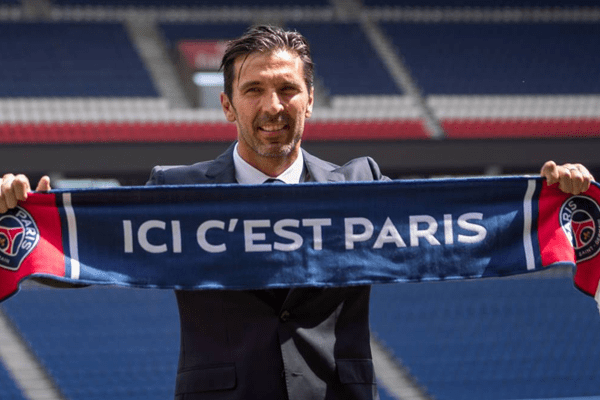 With Portuguese star Cristiano Ronaldo joining Juventus, many might forget that Italy’s legendary goalkeeper Gianluigi Buffon has officially left his longtime club Juventus after being their No.1 for 17 years, joining French giants PSG in a one year deal, with an option to extend it for another year. He joined PSG on a free transfer after his contract with Juventus expired this summer.

PSG officially presented their brand new signing on Monday where Buffon expressed his happiness towards joining a big club like PSG. He said, “It’s the first time I’ve left my country. So only an ambitious project like PSG could have encouraged me to make such a big decision.” He expressed that he and his family really like the city and are happy to be here.

PSG’s fanbase was jubilant as one of the greatest footballers ever to play the beautiful game. They welcomed Buffon with cheers and the atmosphere at the Parc des Princes was electric. Following his unveiling, Buffon set off flares outside the ground in front of fans with the people in attendance roared in approval.

While fans of PSG are jubilant with the arrival of the legendary Gigi, football fans all around the world are trying to figure out why after such a long time at Juventus. With a player as loyal as Buffon, everybody expected him to finish his career at Juventus. So it came as a shock that Gigi joined PSG out of the blue rather than stay at his beloved Juventus.

The contract situation with Juventus is the biggest reason behind Gigi joining PSG. Buffon’s contract with Juventus expired this summer and Juventus were unwilling to offer a new contract to him, especially because of his age. he is 40 years old now and Juventus believed they had gotten everything out of the Italian legend. They rather want to invest in a new goalkeeper who’ll be at the club for a foreseeable future or even promote their youth keepers like Mattia Perrin and Leonardo Loria.

Instead, Juventus reportedly offered a coaching role to Gigi at the club. But Gigi was unwilling to retire just yet. He still believes that he has a few years left in his career and can still play at the highest level. Hence, he didn’t accept Juventus’ coaching offer and looked for a club to play elsewhere.

But Gigi didn’t want to go to China or U.S. to make money. He still wants to play at the highest level and win trophies. hence, he decided to join PSG, one of the biggest teams in the world so he can continue to put on stellar performances and wow the fans for a few more years.

Follow eCelebrityMirror for the latest on all the Sports.