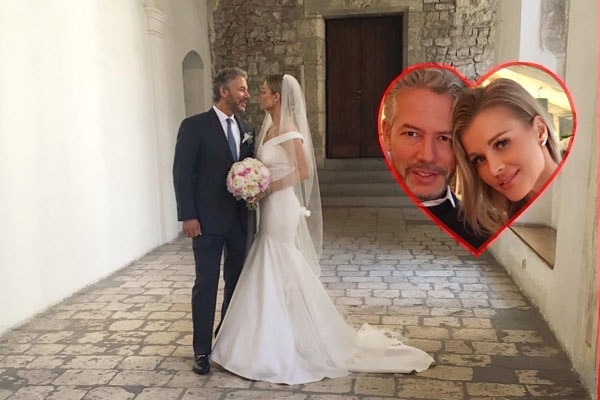 On Saturday, August 4, 2018, the Real Housewives of Miami star Joanna Krupa tied a knot with businessman Douglas Nunes. The couple chose Krupa’s native Poland to be their wedding destination. Beautiful bride Krupa and Groom Douglas Nunes looked really happy on their big day. As they were pronounced husband and wife.

Even though the ceremony was a small private gathering of family and friends, the newlyweds shared their happiness with everyone on their Instagram. Their photo as a bride and groom said it all!

Krupa looked elegant and beautiful in her off the shoulder, floor-length mermaid-style white wedding gown. She chose to pull her hair back into an updo and the hairstyle suited her pretty face. Carrying a bouquet of pink and white peonies, she was looking at her handsome groom Nunes. He looked dashing in his navy suit.

We did it ! @nunes451… dress @sylwiaromaniukcouture @ewa_pieczarka @malgorzata_urbanska_mua @justyna_bulinska #krakow #tyniec it was a very private and small family gathering..wish I could have shared it with all the people that I love.

“We did it!” Joanna wrote along with a message that it was a very private gathering and she really wished if she could share it with all the people she loves.

Joanna Krupa married Douglas Nunes after getting a divorce with her first husband, Romain Zago. Joanna Krupa’s ex-husband is a nightclub owner and a businessman. Krupa and Zago were married for four years and then parted ways in 2017.

Joanna Krupa finalized her divorce in August 2017 with her husband Zago, a month after they filed papers to end their marriage. According to e-online, the ex-couple voluntarily signed a confidential post-nuptial agreement, understood the conditions and didn’t asked for any alimony. Krupa didn’t have any kids with her ex-husband.

Eight months after her divorce, Joanna got engaged and moved on with her soulmate Nunes. She was quite open about her relationship with Nunes. As her Instagram is flooded with photos of Krupa and Nunes spending quality time with each other. The lovebirds posted a beautiful photo of them holding hands. And Krupa had a shining diamond ring in her finger that confirmed of her being engaged.

Just another weekend in the Krupa-Nunes household ❤? @nunes451

And now, Krupa is happily married to the love of her life.

This is a new beginning for the newlywed couple. Cheers to Joanna Krupa and husband Douglas Nunes.

For more Hottest Celebrity News and Entertainment stay with Ecelebritymirror.