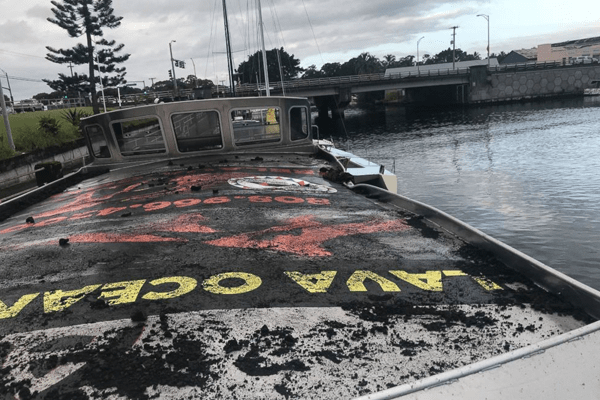 A tour boat in Hawaii was struck by a lava bomb on Monday, leaving 23 people injured in the process. The incident took place near the ocean where lava has been continuously spilling from the Kilauea volcano.

The lava bomb size of a basketball came out of the blue and struck the roof of the boat. The passengers were frightened by the explosion it caused a lot of panic on the boat. The lava bomb punctured the roof, leaving a massive hole in it.

Of the 23 that were injured, four were taken to the Hilo Medical Center, as reported by the Hawaii County Fire Department. Of these four passengers, a woman who was in her 20s is reportedly in a serious condition having suffered a fractured femur. Others are said to have minor injuries only.

Nine other passengers on the boat got out of the boat and drove to the hospital and are said to be only minorly hurt according to the local authorities. It is still unclear how many passengers were actually present on the boat.

Glenda Fay, one of the passengers on the boat, said that the lava bomb just exploded on the roof of the boat and people started screaming. According to him, the boat got stuck in one of the areas where the lava had collapsed, resulting in the explosion.

A lava bomb, for those wondering, is a large rock tossed around the area during a volcanic explosion, as per the U.S. Geological Survey (USGS). The lava bomb that struck the boat was about the size of a basketball.

This whole incident is a result of the volcanic explosion that occurred in the Kilauea volcano on May 3. The volcano eruption has resulted in the overflow of lava from some channel which is causing all the mishap, according to USGS.

The overflow of lava from the explosion has caused a lot of damage in Hawaii, with 706 homes already destroyed due to the eruption. This includes the Kua O Ka La Charter School and Ahalanui Count Beach Park, which were destroyed last week.

Lava has been continuously spilling into the ocean since the explosion happened and according to USGS, it has resulted in the creation of an island, dubbed a “lava island”, just offshore.

Better late than never! Here are photos from today’s activity in #Kilauea‘s Lower East Rift Zone. Of special note is the new lava ‘island’ formed just offshore of the northern end of the ocean entry, which was mentioned in today’s #HVO Status Update.#LERZ https://t.co/oIEvfvO0AE pic.twitter.com/l9IbOChjbq