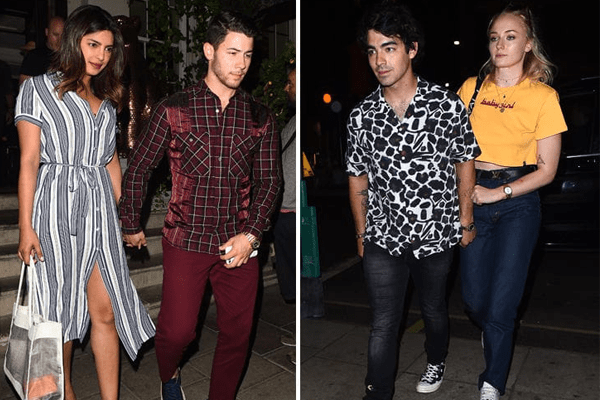 The Jonas brothers; Nick and Joe, are well known for dating a lot of beautiful women. And their knack of dating beautiful women continued as the two brothers went on a double date with Priyanka Chopra and Sophie Turner. And more interestingly, they were joined in by the eldest Jonas brother Kevin.

Nick and Joe were seen with their dates at the 34 Mayfair Restaurant in London on Monday night. As mentioned above, they were also joined in by Kevin, the elder brother of Nick and Joe, who surprisingly arrived without his wife, Danielle. The double-date went along smoothly, and the entire occasion was very romantic indeed.

Nick was there with his current rumored girlfriend, Indian actress Priyanka Chopra whereas Joe went to the date with his soon to be wife, Game of Thrones star Sophie Turner. All of them initially got together to support Joe Jonas for his performance at BST Hyde Park and later to attend the “On the Run” concert of Jay Z and Beyonce. After attending these events, they found time to hang out together and go on a double date.

All 5 of them looked dashing and lovely as they put on some really amazing outfits for the occasion. Nick was wearing a plaid burgundy shirt along with matching pants whereas his date Priyanka was seen wearing a grey and white striped outfit. Sophie, on the other hand, had put on a yellow crop top with jeans while her fiance Joe chose to wear a black and white patterned shirt. Not to be left behind, Kevin looked awesome too in his white shirt and black pants accompanied by a black jacket with grey sleeves.

Joe has been with Sophie since 2016. After a year of dating, Joe finally proposed to Sophie in October 2017, leading the two getting engaged. The two are planning their wedding which is expected to happen soon.

Nick and Priyanka have been dating for over a year now. The two are hanging out together quite a lot and they have also introduced each other to their families. It looks like they’re pretty committed to each other as well.

Kevin appearance in the double-date was pretty surprising, to say the least. He arrived without his wife Danielle. He married Danielle in 2009, and they also have two kids together.

Nick and Joe are well known for dating some really gorgeous women over the years. Before getting engaged to Sophie, Joe had previously dated the likes of Taylor Swift and Demi Lovato. Not to be left behind, Nick has also previously had relationships with pop stars Selena Gomez and Miley Cyrus.