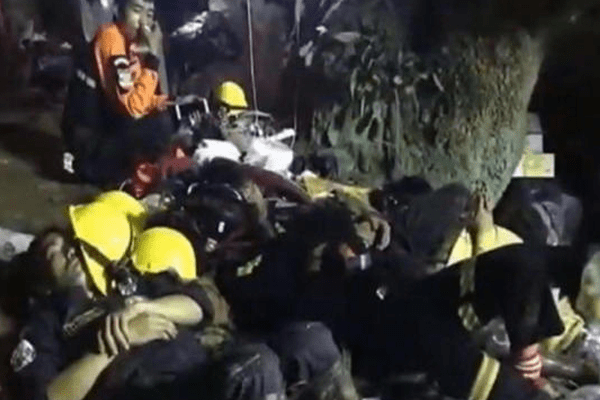 The rescue operation is in its third phase which started on Tuesday. At first, three of the boys were rescued and carried away in an ambulance to a local medical facility. The ones left in the cave, a boy, and the coach, were rescued later in the day.

3 Ambulances arrived at the scene to carry the first three rescued kids to the nearest hospital. The rescued boys are getting medical care and are expected to remain in the hospital for at least a week. the kids are in good health overall but have shown signs of infection. The kids reportedly asked officers if they could attend the World Cup, but were denied due to their health condition. They were told they would have to watch the World Cup on television.

Nine ambulances were stationed at the cave along with medics in order to take care of the boy and his coach who were left in the cave after the extraction of the first three boys, according to the leader of the rescue operation. They are also extracted from the cave without any harm.

A total of 12 boys, young football players, along with their 25-year old coach were stranded in Tham Luang Nang cave on 23rd June as they went there to celebrate the birthday of one of the boys. They were stranded there mainly due to heavy rain and flooding during their visit.

Rescue operations started soon after when they were reported missing just a few hours later. But unfortunately, due to the heavy rain and flooding, the kids couldn’t be located. The kids were finally found on 2nd June by British divers. One Thai navy driver even lost his life trying to locate the kids on 6th June.

The rescue mission officially started on 8th July with 13 divers going into the cave. 4 boys were saved on that followed by 4 more the next day. On Tuesday, the rest of the crew were also saved, first three boys followed by the remaining boy and coach, bringing an end to the rescue operation. They had to be saved Tuesday as heavy rain was projected for the next day, making it impossible to carry out the rescue then.

The geography of the cave didn’t help matters as a massive rock leaves only a small space known as the “pinch point” which separates the divers from the boys. The pinch point has a minimum width of 15 inches, which made it more difficult to rescue the boys.

But despite the difficulties, all the boys have been rescued and hopefully without any harm to them, ending this catastrophe once and for all.