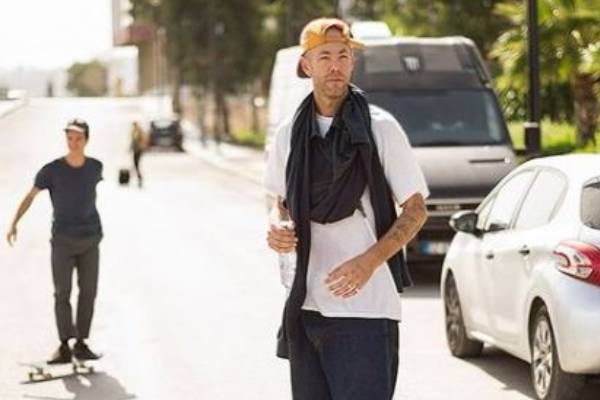 Andrew Reynolds is a famous professional skateboarder from America. He came into prominence for co-founding Baker Skateboards with Jay Strickland in 2000 and is now its sole owner. In his skateboarding career, he has gained immense fame and fortune to his name.

According to Celebrity Net Worth, Andrew Reynolds’s net worth is estimated to be $10 million. Here, let’s learn in detail about how the talented skateboarder Andrew was able to amass such enormous wealth and his earning details.

Andrew Reynolds Net Worth And Career

As stated earlier, Andrew Reynolds’s fortune is estimated to be $10 million. The tremendous wealth that he has amassed comprises his income from business ventures, sponsorships, and other sources. He began skateboarding at the age of nine and is now recognized as one of the world’s most popular and respected sports personalities.

Before going pro, Reynolds had joined Tony Hawk‘s then-new skate team, Birdhouse. He was featured in the fourth Birdhouse video in 1998. Later, he left birdhouse and started his own brand.

Aforementioned, Reynolds left Birdhouse in 2000. After that, he started his own company, Baker, with Jay Strickland. Then, they signed a distribution deal with Blitz Distribution, which Per Welinder and Tony originally formed to distribute their own products. By 2008, the brand had become the top-selling brand under the Blitz Distribution umbrella.

Various products are available on the company’s official site. Here are some of them along with their prices.

Well, Andrew must have earned significantly from the sales of these products as the company, and he himself is famous among the skateboard world. Due to this, his fortune might have also seen a considerable rise in recent years.

Plus, he established Bakerboys Distribution with Jim Greco and Erik Ellington after the company parted ways with Blitz in 2007. It distributes seven brands, some of which are owned by current and past Baker riders.

Furthermore, in 2006, Andrew collaborated with Sole Technology and founded the clothing company named Altamont Apparel. He worked as the head of the design there and was with the company for more than a decade. Thus, he must have garnered a significant amount from the profit that the company had gained.

However, his relation with Altamont Apparel ended in 2017, and he joined RVCA the same year. Since then, he has featured in numerous of its commercial. Similarly, he has also produced his own skateboard videos with the company. As a result, he must have earned generously from both of the companies.

The fame and recognition that Andrew has gained in his career have helped him receive sponsorship opportunities from several brands. He is sponsored by several brands like Baker Skateboards, Independent, Shake Junt, Vans, Stance, Brigada, and Spitfire Wheels.

Furthermore, Andrew Reynolds was part of the footwear brand Emerica for 20 years. The company gave him his first pro-model skateboard shoe in the late 1990s. Then, in November 2018, he released thirteen signature shoe models with the company. The shoe models were very popular, and some of them were even the bestsellers in the business.

After 20 years, in September 2019, Andrew parted away from Emerica and joined Vans in June 2020. Since then, he has collaborated with the brand on several projects. As a result, there’s no doubt that Andrew’s earnings will rise significantly when he releases new footwear.

Moreover, Andrew Reynolds has pocketed a significant amount from the video game series. His skating profile was featured in the original Tony Hawk’s Pro Skater. These appearances must have helped in the growth of Andrew Reynolds’s fortune.

In addition, Andrew’s appearance in the short movies like Shadows, Cop, and 1/2 must have helped him increase his net worth. As a result, he ranks among the richest skateboarders in the world.

As mentioned earlier, Andrew Reynolds’s net worth is estimated to be $10 million. With a multi-million dollar worth fortune, it won’t be a surprise if he lives a luxurious lifestyle. Looking at his wealth, one can assume that he must also pay a significant amount in taxes.

At one point in his life, Reynolds had all the privileges and luxury, a big house, several exotic cars like Lexus SUV, Mercedes, and BMW. In addition, he must have had a good insurance policy for those cars. Similarly, his ex-wife, Christiana, also had a BMW and a house in the hills.

However, it was reported that following the divorce, Reynolds sold his house, cars, and even Cadillacs. In one interview, he mentioned that he prefers to live a normal life and does not care about the house, car, or anything.

Andrew is now enjoying his normal life with his daughter, Stella Reynolds, and his family. He said that he has learned to enjoy life away from luxury and even sold all of his jewelry except his mom’s ring.

With all the earnings and income that he has generated from the sources mentioned above, Andrew Reynolds’s net worth of $10 million seems to be reasonable. Furthermore, he is still very dedicated to his career, so there’s no doubt that his fortune will rise significantly in the future.