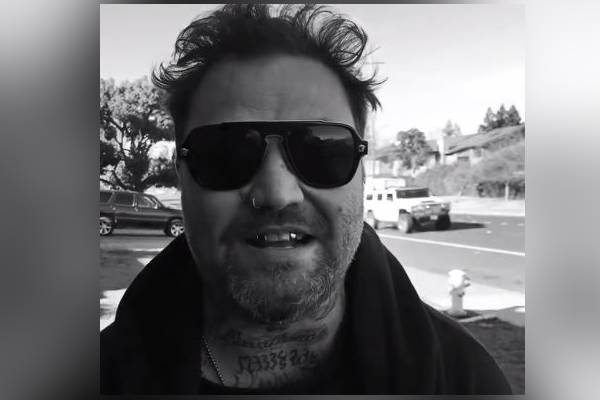 Bam Margera has amassed enormous wealth from the several projects that he has been involved in. Image Source: Nicole Boyd Instagram.

Brandon Cole Margera, aka Bam Margera, is a professional stunt performer, television personality, skateboarder, and filmmaker from America. He has had several acting ventures but is hugely recognized for being one of the actors of the MTV reality stunt show Jackass. Similarly, he has also gained massive fame and fortune for his skateboarding career.

According to The Richest, the talented personality, Bam Margera’s net worth is estimated to be $50 million. Well, stay with us till the end to learn about how Bam was able to earn such a massive multi-million dollar worth fortune to his name and earning details.

Bam Margera Net Worth And Career

As mentioned earlier, Bam Margera’s fortune is estimated to be $50 million. On the other hand, as per Celebrity Net Worth, he has accumulated a fortune worth $20 million. While there are varying reports about his total wealth, we can see that Bam has amassed a considerable sum from his career.

Most of the wealth amassed by him comprises his income from acting ventures, stunt performing shows, and other ventures. So, let’s take look at Bam’s income source.

After being a member for decades, in 2016, he was no longer with Team Element. In his skateboarding career, several brands like Speed Metal Bearings, Electric Sunglasses, Adio Footwear, Volcom, Destroyer Trucks, etc., sponsored him at various times. These sponsorships helped him amass significant money, which eventually increased his wealth.

As of 2017, with no major sponsorships, Bam effectively retired from the skateboarding career. However, he still skates casually.

Income From Movies And Television

Bam Margera began his acting career by shooting himself and friends doing stunts and skateboarding. The videos eventually turned into the CKY video series, which was released by him independently. These videos featured several of his friends like Brandon DiCamillo, Rake Yohn, Ryan Dunn, Brandon Novak, and Chris Raab, who form a group known as the CKY Crew.

The CKY videos drew the attention of the editor of skateboarding magazine Big Brother, Jeff Tremaine. He drafted Bam into the team, which later became the center of MTV’s reality show, Jackass.

Apart from the show, he also appeared in the films Jackass: The Movie, Jackass Number Two, Jackass 3D, and Jackass 3.5.

The worldwide box office collection of Jackass: The Movie is $79.49 million. Similarly, Jackass Number 2 and Jackass 3D earned $84,620,000 and $21,800,000 respectively. Therefore, Margera must have earned considerably from these movies.

The success of the Jackass franchise helped Bam receive several other opportunities like Viva La Bam and Bam’s Unholy Union. Apart from this, Bam has appeared in several other projects like Grind, Bam’s World Domination, and Family Therapy with Dr. Jenn. However, he was fired from the new Jackass movie, Jackass Forever after he breached his contract.

Just like his skateboarding career, Bam’s acting career also seems to be a massive hit. Therefore he must have earned considerably, which helped increase his net worth.

Apart from skateboarding and acting, Bam has also written several other projects like Haggard, HIM: The Making of ‘Buried Alive by Love,’ Viva la Bam, Minghags, and many others. Similarly, he has also produced different masterpieces like CKY Trilogy, Bam’s World Domination, CKY: Infiltrate, Destroy, Rebuild – the Video Album, etc.

Furthermore, Bam also directed the projects mentioned above. An average annual salary of a filmmaker is $53,467. Thus he must have earned a significant amount from these projects that he has written, produced, and directed.

Furthermore, Bam is also an animated character in the Tony Hawk video game franchise. Here are some of the video games and their sales, which might have benefitted him.

Thus, Bam Margera’s fortune of $50 million seems plausible. Plus, he is still very dedicated to his career; thus, there’s no doubt that he has earned a massive income.

As mentioned earlier, Bam Margera’s net worth quite a sum. All thanks to his multi-million dollar fortune, he is able to live a comfortable life with his wife, Nicole Boyd, and son Phoenix Wolf Margera.

Bam owns two houses in West Chester, Pennsylvania; his former house, known as Castle Bam, and his present residence. He bought his former house in 2004 for $1.2 million. In April 2018, Bam’s mom revealed that the house was going under renovation and was going on Airbnb.

Similarly, he bought his other house in 2002 for $1.19 million. With a net worth like that, he must have paid a significant amount in taxes.

Furthermore, Bam also owns several cars like Bentley, Lamborghini Murcielago, and many others. However, in January 2021, his Bentley was stolen from a gas station.

Moreover, in October 2015, he sold his Lamborghini Murcielago. Some online sites suggest that he also has other cars like the Porsche Panamera, Audi R8, and Lamborghini Gallardo, all of which costs thousands of dollars.

Bam must have insurance policies for all his cars.