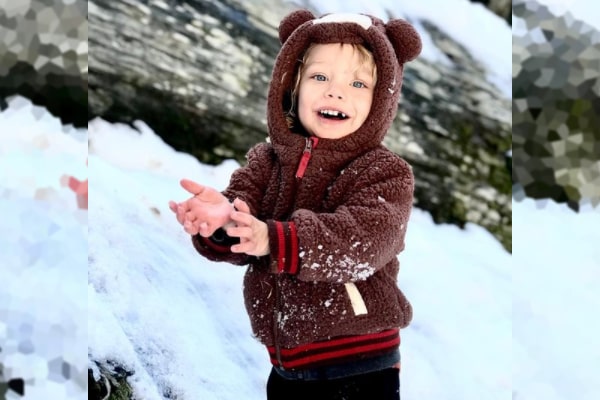 Brandon Cole Margera, famously known as Bam, is an American tv personality, skateboarder, and filmmaker. Furthermore, the stunt performer is primarily known from the MTV reality stunt show, Jackass. There were other Jackass spin-offs like Bam’s Unholy Union, and Bam has also directed and co-wrote films like Haggard and Minghags.

Besides having a star persona, Bam Margera is the father of one with his wife, Nikki Margera. The couple wedded in 2013 and are together ever since. Margera also made headlines after claiming his wife would use their son as their bait if he filed for divorce. There were many other tumultuous incidents that made his fame turn backward.

Nevertheless, we might come back to his infamous alcoholism in the future. For now, let’s meet Bam Margera’s son, Phoenix Wolf Margera, and his livelihood.

Welcomed His First Baby Boy In 2017

Aforementioned, Jackass star Bam Margera became the father for the first time on December 23, 2017, with his wife, Nikki Margera.

Bam announced his son’s arrival via Instagram with a photo of the mom cuddled up with her newborn in the hospital. He further captioned the photo with their son’s name. A series of other pictures followed that included Bam’s father, Phil Margera.

Bam had announced his wife’s pregnancy on Instagram on June 19, 2017. He further spent days sharing his wife, Nikki’s growing belly pictures and admitted that he was anxious about his baby’s arrival.

While talking to People, Bam Margera confessed that he was nervous and had a lot of help from his parents and brother, who already had five kids.

Bam Margera’s child, Phoenix Wolf Margera, is already three and has started learning to skate with his star father. While previously talking to People, he said that he had mixed feelings about teaching his 3-year-old his ‘stupid Jackass stunts.’

Moreover, Phoenix Wolf is a constant face on both his parents’ Instagram and seems to have inherited his parents’ attitude. Having cool parents is unbelievable but having a pre-meditated name is even cooler. Wanna know the name meaning of Margera’s son?

As mentioned earlier, Bam and his wife announced their pregnancy in June 2017. They were excited about welcoming the new life. Moreover, the pair had already decided on their baby’s name; Phoenix Wolf.

In an interview with People, Bam revealed that they’d name his kid Phoenix Wolf. He further said that the name followed around, and when he said it out loud, everybody liked it.

The Margera couple first met at Phoenix Theater in California, where his brother, Jess Margera‘s band, CKY, was performing. Interestingly, the CKY’s 2017 album was titled The Phoenix.

Although the pair were excited to welcome their baby boy, a few incidents followed that questioned Phoenix Wolf’s father, Bam’s sanity.

A Breakdown, Margera Claimed His Wife Would Use Phoenix As A Bait

Aforementioned, a newborn baby is always a new phase in a pair’s life. However, Bam’s recurring alcoholism crippled and almost intruded on his marital life in 2019.

According to Page Six, Bam Margera posted several alarming videos on his Instagram account. In one of the clips, he said that he had disowned his mother and couldn’t stand his wife. Bam also claimed that Nikki Boyd, aka Nikki Margera, would use their son as ‘bait’ against him.

Phoenix Wolf’s father also told his wife to take him and alleged that Nikki was stubborn, which would drive a person ‘F*ing bonkers’ Furthermore, after receiving some help, he revealed that he was ready to join the sober parade with his sober friends.

Despite the storm in mid-2019, Bam Margera and Nikki Margera are still together, in peace and love raising their only son in a healthy and happy environment. Therefore, we might hear more of the pair’s story in the coming days.

However, in September 2021, Phoenix’s mom, Nicole had filed for child custody. It came as a surprise because there has been no news about Nicole and Bam’s divorce or separation. While it is unclear what led to Boyd asking for Phoenix’s custody, we hope the family is okay now and we will get the full picture in the coming days.

Nevertheless, we shall also hear about Bam Margera’s son, Phoenix Wolf Margera, in the future as he seems to have a strong personality like his parents. Thus, what do you think will Wolf choose to enter, the skateboarding world, the entertainment world, or something entirely different from their parents?

The name Phoenix means dark red and has a Greek origin. Similarly, Wolf means traveling wolf and has a Germanic origin.