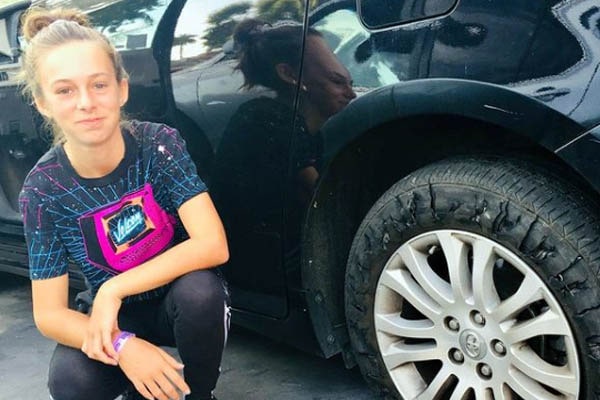 Andrew Reynolds is one of the most prominent American skateboarders of all time, especially famous as a co-founder and owner of the American Skateboarding company, Baker Skateboards. He founded the company in collaboration with artist Jay Strickland in 2000. Besides, Reynolds is also the head of design at the American footwear company Altamont Apparel. Moreover, he is also known for his legendary frontside flips. But, more than these all, his greatest achievement is being an outstanding dad.

The talented and gorgeous daughter of Andrew Reynolds, Stella Reynolds is following her dad’s footsteps in the field of skateboarding. Over the past couple of years, the beautiful teenager has really come into her own as a skater. According to her celebrity dad, Andrew Reynolds, he never told his little girl to skate or ever said anything about skating. But, she decided to follow her dad’s profession, and he always supports her in whatever she does.

In an interview with the Rolling Stones, Andrew Reynolds revealed that his daughter, Stella began to learn skating from her childhood days. She is great at tranny skating, and she is a big fan of Lizzie Armanto, the popular American-Finnish professional skateboarder. Moreover, she dreams of being sponsored by Birdhouse, where her dad played for a while during his early skateboarding career.

Andrew Reynolds’ daughter, Stella Reynolds, got her first board sponsor from the Element team when she was just twelve in 2018. Ever since then, Stella has participated in a couple of skateboarding competitions. It looks like the world is about to get another Reynolds shining out as one of the greatest skateboarders shortly.

Starred In A Movie Inspired By Her Father’s Philosophy

In 2019, the team of ‘Patti,’ a YouTube channel that films original stories of women getting at life, came across Andrew Reynolds’ note written for his daughter, Stella. So, they decided to film about skateboarding, having fun with friends, and not taking life too seriously.

Patti’s short film ‘Dear Stella‘ features Andrew Reynolds’ daughter, Stella Reynolds. With music by Dope Lemon, Dear Stella is a hopeful movie that documents all the enthusiasm and promises of a young skateboarder in her wonder years. As of April 2021, the nearly three minutes long film has garnered over 19K views.

Besides skateboarding, the young skateboarder Stella Reynolds loves art also. As mentioned by Andrew Reynolds, she paints every single day and is good at it too. Stella has her sketchpads full of paintings inspired by famous skateboarders and artists including Kevin Long, Neck Face, and Nora Vasconcellos.

Like Neck Face, Spanky, and Nora, Stella Reynolds draws randomly without conforming to rules. When she sits somewhere with her sketchpad, she does not think or care about anything besides that and just focuses on her ongoing work. And that is what she does while skateboarding too.

Both Of Her Parents Struggled With Drugs In The Past

One of the greatest skateboarders of all time, Andrew Reynolds, began drinking alcohol at age sixteen and got addicted to drugs later. Moreover, he even went to jail a couple of times in the past. However, after being a drug and alcohol addict for many years, his passion and love for skateboarding made him leave bad habits. Moreover, after the birth of Stella, he even quit smoking.

Furthermore, like her dad, Andrew, Stella Reynolds’ mother also struggled with drugs and alcohol in the past. But, it seems like she is also out of it in the present.

Andrew Reynolds is open and honest to his daughter, Stella, about his and his baby mama’s drug addiction. He wants Stella to know that it is dangerous. Whenever they see people on the street whose lives have been affected by the use of drugs, Andrew shows them to his daughter. He does so to make Stella know how addiction to drugs affects people’s life.

Currently, Stella Reynolds is in high school and lives with her dad, Andrew Reynolds, in Florida.