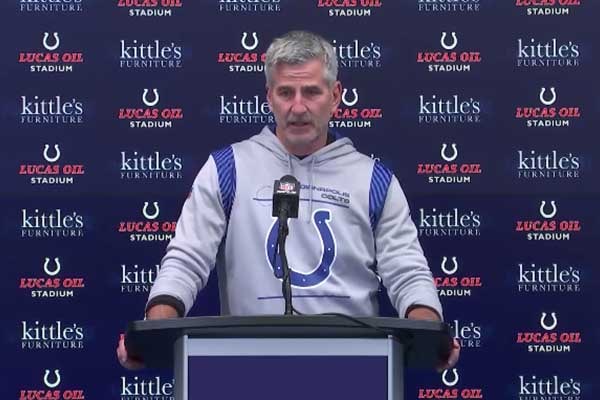 Frank Reich has achieved a fortune from his playing and coaching days in NFL. Photo Source: Social Media.

NFL has seen many transitions of players turning into coaches. And keeping the norm active is the Indianapolis Colts head coach, Frank Reich. He is a former NFL quarterback who played for fourteen seasons, beginning with Buffalo Bills.

The NFL coach has led the Colts to a 28-20 record in his first three seasons. His continued improved performances have made him one of the famous figures in the NFL. But what about his riches and income? Does he earn a considerable sum from his coaching career?

So, let’s break down Frank Reich’s net worth and earning sources in this article.

Frank Reich Net Worth And Earnings

The sportsman emerged as an athlete in his high school years. He later prioritized football and started a career out of it. Since then, he has been devoted to the sports industry for more than three decades.

The player must have earned a substantial income while playing football in college. Still, Frank Reich’s net worth is heavily influenced by his coaching career. It comprises his earnings from his contract signings, bonuses, playing years, coaching, etc. But how much has he made; let’s find out below.

Also Read: Find Out How Much Is Mike Vrabel’s Net Worth

Aforementioned, the athlete played actively in his academic years. He got much recognition after playing collegiate football at the University of Maryland.

Frank was initially backup to his teammate Boomer Esiason before emerging as a starter in college. His most notable contribution was leading Maryland to a 42-40 win against the University of Miami. It also became the biggest comeback in NCAA history.

The Buffalo Bills picked the sportsman at the 1985 NFL Draft that too in the third round. The team must have also offered him a contract with a considerable sum and additional bonuses.

Reich’s best result was assisting Bills to three consecutive victories in 1989. He helped the team clinch the AFC East title in the 1990 season. As such, he gained an extensive five-year contract with them. It also increased Frank Reich’s salary from $210,000 to $500,000 annually.

Aside from that, the NFL player played for Carolina Panthers, New York Jets, and Detroit Lions. His year-long contract with the Panthers brought him $1.25 million, and his two-year contract with the Jets guaranteed him $1 million.

The sportsperson retired from playing after the 1998 NFL season. He was considered one of the greatest quarterbacks in NFL history. Hence, Frank Reich’s fortune must have increased during his playing years.

Despite retiring from his playing career, Reich’s heart was still dedicated to football. So, when Indianapolis Colts offered him a coaching intern job in 2006, he immediately jumped in. Moreover, he held the position for a season before joining Colts’ offensive coaching staff.

Frank was with Colts till 2011 before getting dismissed. He then joined Arizona Cardinals as their wide receiver coach. Furthermore, he served as offensive coordinator for San Diego Chargers and Philadelphia Eagles.

Finally, Reich returned to Colts as their head coach in the 2018 season. Although he hasn’t revealed the details of his contract with Colts, it must have brought him millions of dollars annually.

The head coach adopted a new strategy of starting the seasons with different quarterbacks for four seasons. His idea has borne remarkable results with the Colts recording a 28-20 record. In addition, his contributions have increased his income each year.

As per Sportscriber, Frank’s salary from Colts amount to $4.5 million a year. It also estimates Frank Reich’s net worth to be $10 million as of 2021. Furthermore, the Indianapolis Colts extended his contract to 2026 in August 2021.

Thus, Reich’s fortune will continue to increase more with this new contract extension.

The Colts’ head coach is certainly not a rookie with his nearly four decades-long NFL career. His dedication and devotion to football have helped his earnings to be in millions. With such a good income, he must undoubtedly enjoy a comfortable life with his family.

Likewise, Reich must have invested his hard-earned money on nice properties and houses. For instance, he bought a secluded home in Lake Wylie, South Carolina. in 2012. Moreover, he paid $1.1 million for the 4,688 square foot house that was built in 2006.

Frank’s home has five bedrooms with a separate bathroom for each. It also has a vaulted ceiling, two fireplaces, a beautiful kitchen, and a media room. The villa is close to the water, with access to a sand beach, a floating dock, and a boathouse.

The NFL coach put the home for rent in 2014. He offered the price of $5,995 a month for any interested renter. Of course, with such excellent features, someone might have rented the place already.

Aside from that, Reich might also have other properties under his name. He might also possess some luxurious and branded cars or items.

The former quarterback has won the hearts of many people with his outstanding coaching skills. With his new contract extension, he will surely show better results in the future. We wish him good luck and prosperity for his NFL days ahead.