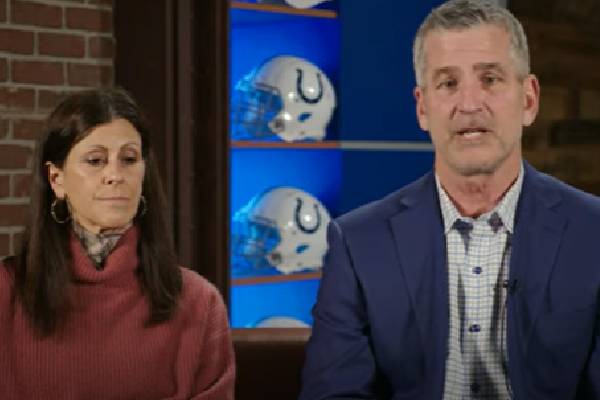 Frank Reich is often considered one of the well-known coaches in American football. He is the head coach of the Indianapolis Colts of the National Football League and is a former quarterback. In addition to football, he also loved playing basketball, volleyball, and other sports. Nevertheless, we could see he had a profound love for football when he was a child that has shown up in his coaching abilities and strategies, which have resulted in several triumphs and awards.

Well, as much as his football career is interesting, so is his love life. The football lover is married to his beloved partner, Linda Reich. Together the couple has been living a happy and prosperous life.

Hence, why not look at his love life and know a little more about Frank Reich’s wife, Linda Reich.

Cut to the chase, there are no official citings that say where the married couple first met and about their relationship. However, some of the sites claim that when the pair met at Cedar Crest High, Linda was a cheerleader, and Frank was a footballer.

Well, the cheerleader was reportedly dating Frank’s best friend previous to dating him. After she ended her relationship with his best buddy, the two started dating.

Apparently, the pair married in 1986 and have been blissfully married for more than 3 decades now. There’s no denying that being the wife of an NFL head coach comes with a lot of responsibility. Hence, Frank Reich’s wife, Linda Reich, may or may not be a ‘football lady,’ depending on how one defines the term. She is, without a doubt, the head coach of her husband’s support team.

The couple has come a long way, ever since they tied the knot. During the union and companionship of togetherness, the couple welcomed three beautiful daughters. Linda and Frank Reich’s daughters are Lia Reich, Aviry Reich, and Hannah Reich. All of their three gorgeous girls are happily married.

Looking back, there was a moment of uncertainty for the Reichs between Frank’s playing days and his coaching days. The pair preferred to focus on raising their daughters at the time. On the other hand, Linda Reich’s husband had always wanted to be a coach. However, they valued their family.

Needless to say, with the dedicated support of Frank’s wife Linda’s support by his side, he achieved it all. The sports enthusiast didn’t have to compromise in either of the phases, be it his dream of being a coach or a doting father.

NFL football is a highly competitive sport with a high level of tension. It requires long hours and hard work. However, we can conclude that Linda’s responsibility extends much beyond simply “holding down the fort.”

Frank Reich’s Wife Is A Philanthropist

The former quarterback’s wife, Linda, seems to be an inspirational person. Linda’s daughter, Lia Reich, shared to the media that her parents have taught her the importance of giving everything you have to help others. It reflects the upbringing of the family members. That being said, Frank Reich’s wife is currently involved with a group dedicated to making a difference in the society.

In other words, Frank Reich, the head coach of the Indianapolis Colts, and his wife Linda used the My Cause My Cleats game to announce the creation of their Knot Today charity. The foundation aims to protect children from sexual abuse and exploitation.

The Couple Is Living A Blissful Life After Becoming Grandparents

Just like Frank embraced his new title of head coach, he and his wife Linda totally embrace their role as grandparents. Linda’s eldest daughter Lia welcomed a baby in March 2019.

Furthermore, Linda’s husband stated that their family has always been a sports and football family, and the couple’s daughters have been a part of it all. The NFL coach further added that it’s much more meaningful now that they also have a grandchild.

The little baby has been named Bishop. Lia, their daughter, phrases that her parents have instilled in them the value of giving everything you have to serve others throughout your life. Similarly, she hopes that Frank and Linda’s granddaughter Bishop would be half as good as they are.

Moreover, the couple has had friends become grandparents throughout the years, but it wasn’t until Bishop came along that they truly understood. Linda Reich’s husband Frank told the media that hearing all the stories about how wonderful it is to be a grandparent, but unless you experience it for yourself, you won’t know.