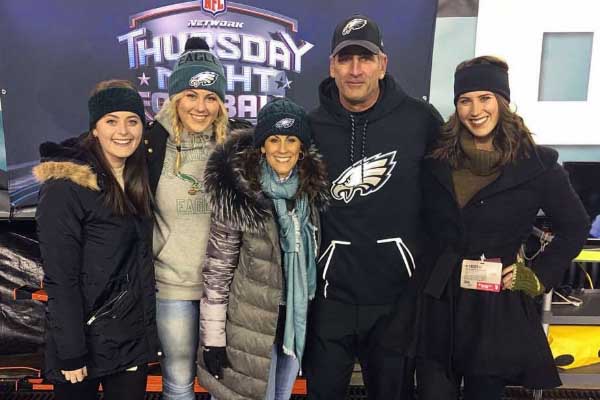 Frank Reich isn’t a new name in the sports world. He has been doing a tremendous job as the head coach of the Indianapolis Colts of the NFL. Moreover, the sportsman initially played as a quarterback for fourteen seasons. For instance, he played for Buffalo Bills, Carolina Panthers, New York Jets, etc.

Like his professional career, the coach has also enjoyed a successful marital life. Frank Reich’s wife, Linda Reich, is his high school sweetheart who has been married to him for over three decades. Furthermore, the couple has welcomed three lovely daughters. However, many might not have heard much about them.

Aviry Reich Is A Sports Counselor, Speaker, And Researcher

Aviry is the middle child of NFL coach Frank Reich and his wife, Linda. She grew up in a sports household and developed a passion for swimming at seven. In addition, she dabbled in volleyball, dance, and basketball in high school.

However, swimming was Reich’s forte, and she became a competitive swimmer at The University of Maryland. Sadly her sports career was cut short after enduring a shoulder injury. The incident caused her difficulty in coping mentally and emotionally.

But it taught the former athlete how much mental and emotional fitness is needed for a player. She then began supporting and advocating for sportsperson’s mental health through clinical and research practice.

Hence after obtaining her Master’s and Ph.D. in counseling/consultant education, the UMD alumnus began working as a sports counselor. She has founded Limitless Living Counseling & Consulting, PLLC, an adult mental health clinic in Greensboro, NC. Furthermore, she specializes in working with athletes and young adults related to anxiety, loss, depression, sports performance, etc.

Alongside having a prosperous career, the sports counselor enjoys a comfortable life with her spouse, Brett Williams. He must be very supportive of her career.

Aviry Reich’s husband, Brett Williams, is a graduate of The University of North Carolina. As Aviry also completed her Master’s and Ph.D. there, both must have met there for the first time.

The pair had a romantic wedding at the seaside of St. Lucia in 2017. Both bride and groom’s parents attended the event to give their blessings.

Going through the couple’s social media accounts, they constantly post pictures together. Both don’t shy away from PDAs and often show their chemistry in their photos.

Is A Mother Of A Daughter

Frank Reich’s child is living a happy marital life with her partner, Brett. However, her happiness has doubled since the birth of her adorable daughter, Iris Williams.

Aviry Reich’s baby girl, Iris, was born in 2021. She is a lovely girl and often appears on her mother’s Facebook posts. Also, the little one had an amazing Christmas with her family.

Lia Reich Was A Freestyle Swimmer In Her Academic Years

Frank Reich’s eldest daughter, Lia Reich, also inherited the sports genes and was involved in sports from a young age. Although she was interested in football, her true calling was swimming and diving.

The athlete also majored in journalism and graduated with a B.A. in 2012.

Lia Is An Advocate For Children At kNot Today

The former swimmer works as head of advocacy in a non-profit organization, kNot Today. It generates awareness and develops healing programs for sexually abused, exploited, and trafficked children.

Before working in the non-profit sector, Reich led the Global Communications and Marketing Divison of Wing. She was an industry representative to advance drone technology’s acceptance, awareness, and adoption. In addition, she served as a VP of Marketing Communications in PrecisionHawk for a half-decade.

Is A Loving Wife And Mother

Going through the couple’s FB accounts, they seem to have begun dating in their college years. Both continued their relationship before tieing the knot in 2016. Since then the duo has been enjoying a blissful married life.

The lovebirds welcomed their daughter, Bishop Brown, in March 2019. Lia announced her pregnancy to her father, Frank. interestingly she baked him a Texas Sheet Cake with the letters “Super Bowl Baby Coming In 2019.”

Lia Reich’s daughter, Bishop, is the first grandchild of coach Frank Reich and has attended Colts games with her family. Although she might not remember them, it will be a good memory to look back for in the future.

Like her elder siblings, Hannah is also blissfully married to the love of her life. Hannah Reich’s husband, Andrew Fairman, graduated from Queens McColl School of Business and Queens University of Charlotte. In addition, he competed in marathons and bike riding in college.

The couple had their engagement on September 5, 2020. However, both must have dated for some time before that. Moreover, Hannah and Andrew had an intimate wedding on July 11, 2021. Both have been enjoying marital bliss since.

The pair are active on social media and often post pictures of their travels and vacations. Both must support each other’s careers wholeheartedly.

Frank Reich’s daughters, Aviry, Lia, and Hannah, constantly show their support for him and his team, Indianapolis Colts. They also share news related to Colts on their Twitter accounts and cheer for their victory on matches.

We wish Reich and his children prosperity and happiness in the days ahead.

Frank’s eldest daughter, Lia’s name is of Latin origin and is derived from the name Leah meaning “languid or relaxed.”

His middle child, Aviry’s name is likely derived from the English-French name, Averymeaning “ruler of elves.”