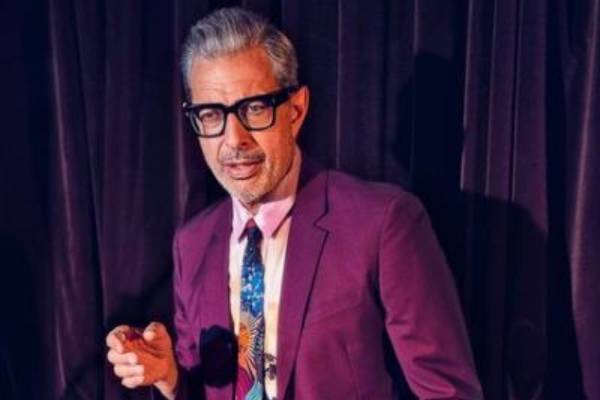 Jeff Goldblum's is one of the highest grossing actors in Hollywood. Image Source: Jeff's Instagram.

Jeffrey Lynn Goldblum, aka Jeff Goldblum, is a famous American musician, actor, and screenwriter. Many of Jeff’s movies have gone on to become the highest-grossing films. However, he is most famous for his role as Dr. Ian Malcolm in the cult classic Jurassic Park and many of its sequels. Besides appearing on the big screen, Jeff has also worked in many television series Will & Grace, Law & Order: Criminal Intent, and Inside Amy Schumer.

In his accomplished career of more than four decades, Jeffrey must have made a significant amount of money. The talented actor has been nominated for Primetime Emmy Award for his acting skills. Furthermore, he also has a Jazz band releasing their music frequently.

So, taking all these things into consideration, let’s talk about Jeff Goldblum’s net worth in today’s article.

Jeff Goldblum Net Worth And Earnings

As a successful Hollywood actor and one of the household names, the Jurassic Park star’s wealth is astoundingly sound. According to Celebrity Net Worth, Jeff Goldblum’s net worth is estimated to be $40 million. He has starred in some of the highest-grossing movies and highly successful television series which helped increase his fortune.

Jeff began his acting career with the Broadway musical Two Gentlemen of Verona in the early 1970s. However, he made his Hollywood debut soon in 1974 as a drug-addled punk in the movie Death Wish. Since then, Goldblum has gone on to act on several big movies delivering some of the highest-earning films.

Some of the highest-grossing movies that Jeff has been part of are listed below.

Similarly, earnings from these movies must have contributed a considerable sum of amount to Jeff Goldblum’s net worth. Furthemore, the actor himself has made the list of Best 100 actors in a cameo role, Highest-grossing star of Box office, and many more.

Looking at his movie’s collections and reputation as an actor, we can say that Jeff Goldblum’s salary must also be pretty handsome. In addition, he is charging millions for acting in the movies. Some of his salaries from his films are mentioned below:

Hence, it is no surprise that Jeff is a multimillionaire. Undoubtedly, he has worked hard to achieve this enormous success and reach this successful position.

Besides acting in films, Jeff Goldblum is also a musician. He has a Jazz band called Jeff Goldblum and the Mildred Snitzer Orchestra. The group released their first album, The Capitol Studios Sessions, in 2018.

However, Jeff made his first professional recording as a Jazz pianist more than twenty years ago in 2001. He contributed to the album Hollywood Goes Wild!, where many other television actors and movie stars were featured.

The band dropped their last album in 2019 called I Shouldn’t Be Telling You This. Hence, Goldblum must have made a reasonable sum of money from his music career, adding to his net fortune.

Apart from music and movies, Jeff has also acted in many TV series like Search Party, What If?, and Glee. Similarly, he must have charged a hefty fee for his role on the popular television sitcoms.

As one of the highest-grossing actors, it won’t come as a surprise if Jeff Goldblum is living a lavish and luxurious lifestyle. Nevertheless, the actor owns a three-bedroom, three bathrooms, and 3,000 square feet house in Los Angeles. He bought the property in 1982 before his career skyrocketed and has been its owner for almost forty years.

In addition, Jeff has earned more than enough wealth to acquire fancy cars, planes, and mansions. However, having been married and divorced twice might have also taken a major hit on Jeff Goldblum’s net worth.

Jeff Goldblum married actress Patricia Gaul in 1980 and divorced in 1986. After his separation from Patricia, Goldblum married Geena Davis. However, the duo was only married for four years. Currently, Jeff is married to Emilie Livingston since 2014. The couple has two children together, River Joe Goldblum and Charlie Ocean Goldblum.

Nonetheless, we wish his family all the best for their future.