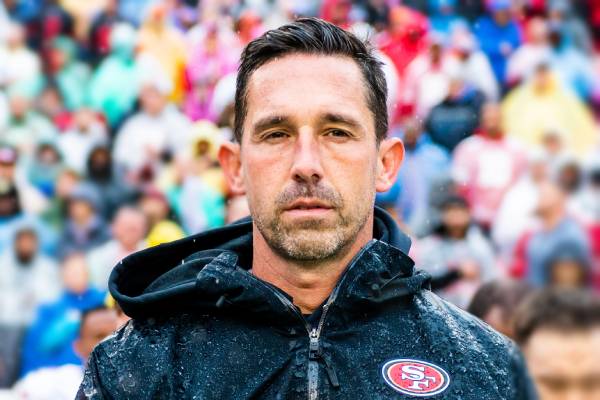 Kyle Shanahan Has Amassed A Significant Amount As A Head Coach And An offensive coordinator In NFL. Image Source: Wikimedia Commons.

The National Football League, or simply NFL, was founded in 1920 and is primarily regarded as one of the leading sports leagues in the world. It is also one of the most-watched sports in the States. Aside from fans, the NFL is well-known for its significant wages. And one of the game’s most essential components is its coach.

While coaching may not be as dangerous as playing, they bear a great deal of responsibility as the team’s brain. Winning in the NFL can open several possibilities for a great coach. Many professionals have turned their careers into successful businesses, earning tens of millions of dollars on the field.

Kyle Michael Shanahan, current San Francisco 49ers’ head coach, is one such coach who has committed his life to make strategic decisions and supporting athletes to reach their highest potential. So, let’s look at Kyle Shanahan‘s net worth and income sources in this article.

Kyle Shanahan Net Worth And Earnings

According to Celebrity Net Worth, the NFL coach has amassed a fortune of $4 million to his name. Kyle has dedicated his life to football, unlike other coaches who dabble on and off the field. Therefore, the majority of his riches stems from his successful coaching career. Let us now look at his earnings and salary information.

Earnings From His Collegiate Career

Kyle was driven to become a professional coach after growing up watching his father, former Denver Broncos, and Washington Redskins head coach Mike Shanahan. However, before coaching NFL teams, the San Francisco 49ers‘ head coach served as a graduate assistant to Karl Dorrell at UCLA.

Slowly, he climbed through the ranks to coach professional teams. It is reasonable to assume that Kyle Shanahan’s fortune did improve while serving as the graduate assistant at UCLA.

Shanahan’s Salary From His Coaching Career

Kyle Shanahan kickstarted his professional coaching career with the Tampa Bay Buccaneers as an offensive quality control assistant under coach Jon Gruden. Then, in 2006, Gary Kubiak hired the at-the-time assistant coach to serve as wide receivers coach for the Houston Texans.

After a season, Shanahan received a promotion to become the quarterback coach for the Texans. Then, after his father departed the Texans to become head coach at Texas A&M University, Shanahan was named the frontrunner for the vacant offensive coordinator position.

The Texans then promoted Mike’s son on January 11, 2008, to become the youngest coordinator in the NFL. So, while Kyle Shanahan’s salary details have been kept under wraps, it is safe to assume that his wealth improved during his tenure with the Texans.

However, in 2010, Kyle joined his father as the offensive coordinator with the Washington Redskins. The decision to hire him led to many raising a finger at the team of nepotism. Furthermore, the NFL fined Kyle $25,000 for criticizing and attacking replacement referees after losing to the Cincinnati Bengals in 2012.

Unfortunately, on December 30, 2013, the Redskins fired Kyle Shanahan and the rest of the coaching staff. Following this, the Cleveland Browns hired him as their offensive coordinator. However, Shanahan’s stay was brief, and he quit owing to disagreements with head coach Mike Pettine.

He then served the Atlanta Falcons for over two years. So, Kyle Shanahan’s fortune must have improved significantly from his coaching career.

Signed A $21 Million Contract With The 49ers

On February 6, 2017, the San Francisco 49ers hired the former Falcons’ offensive coordinator as their head coach. Following this, Shanahan signed a six-year $21 million contract with the team. With the 49ers’, Kyle found much success on the fields and led the team to many victories. Moreover, in 2019, Sporting News named Shanahan as the Coach of the Year.

With still three years remaining on his initial contract, Shanahan signed a six-year contract extension with the 49ers on June 15, 2020. While the details of the deal have not been revealed, as per reports, Mike Shanahan’s son became one of the five highest-paid head coaches in NFL.

Sadly, the head coach has been fined twice with the team. Once, the NFL fined him $100,000 for not wearing a face mask properly during the COVID-19 pandemic. Secondly, on July 1, 2021, the NFL fined Kyle $50,000 for breaching practice regulations during organized team activities.

Let us hope that the head coach has learned his lesson and that no more money is deducted from Kyle Shanahan’s net worth to pay fines.

Working as an NFL coach has undoubtedly contributed to Kyle Shanahan’s riches. So, it might not be an exaggeration to say that the 49ers’ head coach enjoys a glamorous and lavish lifestyle. Moreover, the head coach bought a Saratoga house for $6.8 million in 2017. Kyle and his family currently reside there, and he even gave a quick tour of his home during the lockdown.

Overall, it is reasonable to conclude that Kyle Shanahan’s fortune provides a comfortable life for him and his family. Nonetheless, the professional coach still has a long way to go. So, we wish him well and hope his fortunes increases in the coming years.