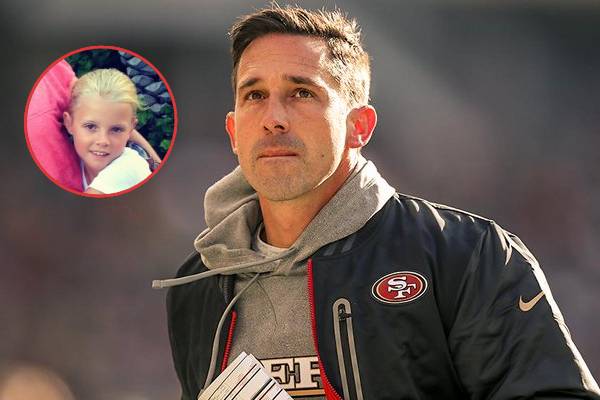 Kyle Michael Shanahan, the current head coach of the San Francisco 49ers of the National Football League, is a renowned personality in the sporting industry. Despite numerous ups and downs, the 49ers head coach has risen to the top and earned respect and admiration of millions. Moreover, Kyle Shanahan served as an offensive coordinator for the Atlanta Falcons, Washington Redskins, Cleveland Browns, and Houston Texans.

Shanahan’s personal life, like his work, appears to be doing well. He lives a blissful life with the love of his life, Mandy Shanahan. Moreover, the pair have welcomed three beautiful and talented children. However, Kyle rarely talks about his family in public, so many are in the dark.

So, let us get to know Kyle Shanahan’s daughter, Stella Shanahan, a bit better through this article. Let us also find out if the celebrity child enjoys sports as much as her father.

Stella Taylor Shanahan‘s parents first met at Cherry Creek High School in Denver and began dating soon. However, Kyle and Mandy decided to call it quits when they attended different universities for their higher education.

The two reconnected when Mandy called Kyle during a challenging moment in her life. At the time, Mandy’s mother, Nancy O’Donnell, was fighting stage 4 gallbladder cancer. Sadly, Stella’s maternal grandmother passed away on January 31, 2002.

After going through such difficult times together, her parents rekindled their love and married on July 5, 2005. Shortly after exchanging wedding vows, the couple welcomed Stella.

According to Houston Texans, the eldest of Kyle Shanahan’s children was born on August 7, 2007, at the Woman’s Hospital in Houston, Texas. However, Kyle and his partner haven’t disclosed much about their daughter since then.

Likewise, owing to their private way of living, how Kyle Shanahan’s daughter is growing up remains a mystery. Still, Stella’s mother claimed in an interview that the head coach matured, and his priorities turned to his daughter immediately after her arrival. Kyle got attached by the hip to his daughter and did everything with her.

So, with the 49ers’ head coach putting family first, it is reasonable to assume that he and his wife provide excellent care for their daughter.

Also Read: Learn About Jacqueline Laurita’s Son, Nicholas Francis Laurita, And How He Copes With Autism

Has A Brother And Sister

Kyle and his partner have two more children in addition to Stella. Their second child, Carter Shanahan, is named after A Milli rapper Lil Wayne, whose real name is Dwayne Michael Carter Jr. Then the couple’s youngest daughter, Lexi Shanahan, was born a few years later.

Like most celebrity parents, Kyle and his partner are currently raising their children away from the influence of the media and are rarely seen in public. Still, the kids occasionally attend matches coached by their father. Furthermore, the football coach showed his children and wife in a video where he gave his admirers a house and home office tour.

As seen in the video, the kids are being homeschooled at the moment. Therefore, it is safe to assume that Stella and her siblings are having a wonderful time with their family. So, for now, let us wish Kyle Shanahan’s children and spouse well and hope that their happiness increases with time.

Does Kyle Shanahan’s Daughter Have Any Interest In Sports?

Kyle Shanahan’s daughter was already attending NFL games just two weeks after her birth. Her father even planned on getting her a jersey as soon as he found one that fit. Evidently, Kyle and his partner are introducing sports to their children at a young age. So it would not be unexpected if Stella acquired an interest in sports and followed her father’s footsteps.

Unfortunately, it is still very early to tell if Stella has developed any passion for football in particular. And, owing to their private way of living, her interests remain a mystery. So, while her father might be a walking legend in the sports industry, it might take a while for her to follow suit and share his spotlight.

Nonetheless, if she decides to pursue a career in athletics, there is no doubt that she will be successful with a legendary father mentoring and assisting her.

Having Latin origins, Stella is a beautiful girl name that means star.