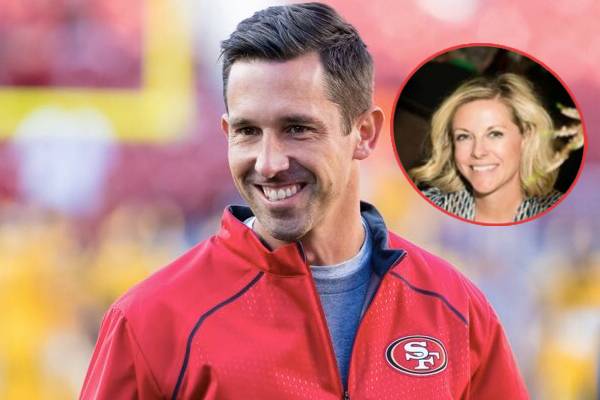 Evidently, Shanahan’s career has been up to par to this day. However, the successful head coach’s path to success has not always been smooth. From fines worth thousands, accusations of nepotism, and the Redskins’ firing him, he has been through some tough times. Yet, throughout it all, Kyle had a shoulder to lean on, his wife, Mandy Shanahan.

Together Kyle and Mandy Shanahan make a power couple. However, it’s been a hot minute since the two have been in the spotlight. So, let’s find out what Kyle Shanahan’s wife is up to right now, learn about her love life, and see how their marriage is doing.

Born Amanda O’Donnell in Colorado, Mandy attended Cherry Creek High School in Denver. At high school, she met Kyle, her senior, and started dating him not long after. Sadly, their romance did not endure long, and the two went their separate ways when they attended different institutions to further their study.

Mandy moved on with her life and continued pursuing her education at the University of Colorado, located in Boulder, Colorado. Kyle Shanahan’s wife later graduated with a degree in English Literature.

However, fate had other ideas for Kyle and Mandy, and the two reconnected when the Colorado native contacted the head coach during a difficult time in her life.

Amanda’s mother was suffering from stage 4 gallbladder cancer. Sadly, O’Donnell’s mother, Nancy O’Donnell, succumbed to the illness and died at 57 on January 31, 2002. Kyle became Amanda’s anchor in such dark times. According to sources, the football coach would frequently write her letters and fly over to take walks with her, helping her get through the traumatic experience.

Soon, the pair rekindled their romance and tied the knot not long after.

Married For A Long Time

As mentioned above, Kyle Shanahan and Mandy Shanahan decided to take their relationship to the next level and exchanged wedding vows on July 5, 2005. Since then, Kyle and his partner have been living happily together in Saratoga, New York.

There is no doubt that the San Francisco 49ers‘ head coach is grateful to have such a great companion who was always there for him during troubled periods. Furthermore, the pair has welcomed three children during their decades-long marriage.

Kyle Shanahan’s Wife Is A Mother Of Three

Mandy and Kyle tied the knot in 2005 and have been together ever since. Kyle Shanahan’s spouse gave birth to three children during their time together. The couple’s eldest, Stella Shanahan, was born in Houston, Texas. Then, they welcomed their son, Carter Shanahan.

The couple reportedly named their son after the legendary rapper Lil Wayne, whose real name is Dwayne Michael Carter Jr. When the rapper learned of this, he decided to send signed copies of his albums and a poster with a personalized message for Mandy’s husband Kyle and their son.

Here’s what Lil Wayne sent Kyle Shanahan.
“Hell, I have 3 boys of my own and only one is named after me!! LOL!”
😂😂😂 pic.twitter.com/zQExaT7Gyd

The pair then welcomed their third child, a daughter, Lexi Shanahan. All of Kyle Shanahan’s children are being raised away from the influence of the media. Still, the head coach’s wife and kids were featured in a video where Kyle was showing off his house. The little ones were being homeschooled at their Saratoga home in a video.

So, it is safe to assume that Mandy and her family are well off even if they do not display their lifestyle on social media. Moreover, with Kyle Shanahan’s net worth in the millions, the family must enjoy a comfortable life.

Similarly, based on the video, it appears like Mandy is in good health and that their marriage is doing well. So, let us wish Kyle Shanahan’s spouse and family well and hope that their happiness grows tenfold with time.