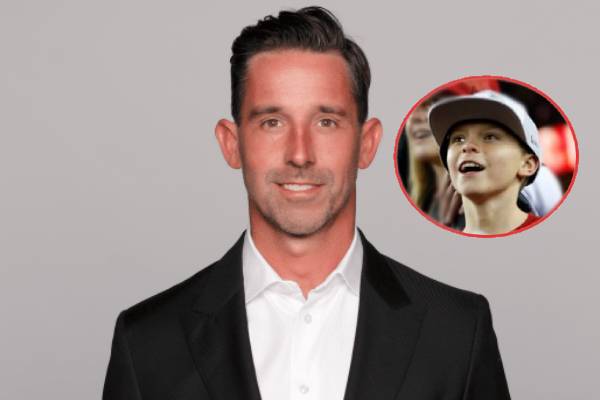 Kyle Michael Shanahan, the present head coach of NFL’s San Francisco 49ers, is a well-known figure in the sports world. Despite allegations of nepotism, Kyle Shanahan has worked his way to the top and earned the love of millions. He previously served Atlanta Falcons, Cleveland Browns, Washington Redskins, and Houston Texans as an offensive coordinator.

Apart from being a respectable figure in the sports industry, the 49ers’ head coach is also a loving father of three children. So, let us get to know Kyle Shanahan’s son, Carter Shanahan, a bit better through this article. Let us also find out if the celebrity kid has shown any interest in sports.

Only Son Of The 49ers Head Coach

Kyle met his wife Mandy Shanahan while in Cherry Creek High School in Denver. While they took a break during their romantic journey, the two rekindled their love after Carter’s maternal grandmother, Nancy O’Donnell, died of stage 4 gallbladder cancer.

Carter Shanahan’s parents then tied the knot on July 5, 2005. Since then, Kyle and his partner have welcomed three adorable and talented children, including Carter. The couple’s eldest, Stella Shanahan, was born in Houston, Texas. Not long after, they welcomed their little boy.

The couple reportedly named their son after Kyle’s favorite rapper Dwayne Michael Carter Jr., a.k.a Lil Wayne. When the rapper learned of this, he sent signed copies of two of his albums and posters, each containing a personalized message for Kyle and his son.

Kyle Shanahan’s kid must have been ecstatic about the kind gesture made by the rapper. The father-son duo even posed for a picture holding Wayne’s gifts to show their appreciation.

49ers coach Kyle Shanahan named his son Carter after Lil’ Wayne so @LilTunechi sent them both a surprise gift! pic.twitter.com/ssn12TIVs6

The pair then welcomed Carter Shanahan’s younger sister, Lexi Shanahan. Kyle’s children are being raised in an environment free of media intrusion. Nonetheless, the head coach’s wife and children were seen in a video where Kyle was showing off his house.

Kyle Shanahan’s son and daughters were being homeschooled at their Saratoga home in the video. So, it is reasonable to assume that Carter’s parents are raising him well and providing him with a good lifestyle.

Will Carter Pursue A Career In Sports?

Carter Shanahan comes from an athletic family. His father Kyle, and grandfather Mike Shanahan, have a long history in sports and are two of the NHL’s most outstanding head coaches in history. As a result, the celebrity kid might have developed some interest in football. So, the question, “Will Kyle Shanahan’s Son follow in his footsteps?” is frequently on people’s minds.

It is still very early to determine whether Carter has any interest in sports to answer the question. Still, Carter is growing up under the roof with one of the most respectable figures in the sports industry. Thus, it will not be a big surprise if Kyle Shanahan’s kid does decide to pursue a career in coaching professional football teams once he grows up.

Even if he does not, Carter’s parents will wholeheartedly support him. Moreover, it is still too early to tell whether he has inherited his father’s talent, and he still has a lot of time to figure everything out.

So, for the time being, let us send our best wishes to the family and hope that their days are filled with happiness as time goes on.

We hear about celebrities spending millions of dollars and living their best lives every day. It goes without saying that stars make a lot of money, allowing them to engage in all of the fun and lavish activities that many of us are envious of. Their lavish lifestyle also allows them to shower their children with riches that we can only dream of.

However, not all celebrities are the same and like flashing their riches to the world. Similarly, Kyle and his partner raised their child primarily outside the spotlight. So, it is not surprising that Carter has grown up to prefer a private lifestyle. Because of his reclusive lifestyle, little is known about how he is spending his teenage years.

Still, with Shanahan’s million-dollar net worth, it is only safe to assume that his children have access to finer things in life. Moreover, the celebrity kid is close to the 49ers’ players, including Kyle Patrick Juszczyk and George Krieger Kittle, and often spends time with them.

Kyle Shanahan’s son is currently enjoying a peaceful life in his Saratoga home. So, we send him and his family our best wishes and hope they have better days ahead of them.

Carter is typically a name given to someone who transports goods by cart or wagon. It is of Irish, Scottish, and English origin.