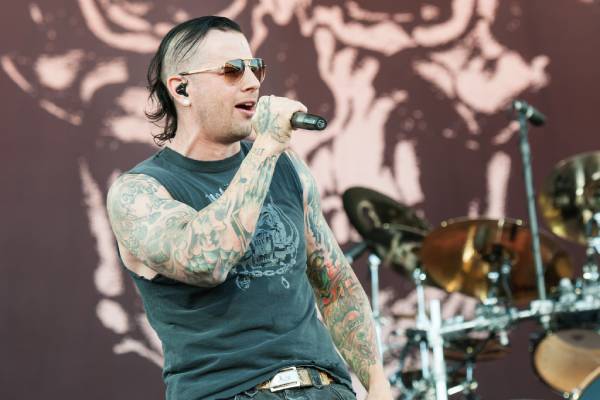 If you are a fan of metal music, you won’t fail to recognize the popular American heavy metal band Avenged Sevenfold or A7X and its lead vocalist M. Shadows. Born Matthew Charles Sanders, he is a singer-songwriter and is one of the founding members of the A7X.

Since beginning his career in 1999, the talented vocalist has been in the music industry for about twenty-three years now. Considering his successful career and popularity, the 40-year-old must have amassed a remarkable sum. Thus, we will be learning about M. Shadows’ net worth from his career as a musician.

M. Shadows Net Worth And Earnings

As per Celebrity Net Worth, M. Shadows’ net worth is estimated to be around the amount of $20 million. So now, let’s break down his income and pays as a musician.

Being the lead vocalist of the A7X, Shadows must have made a significant amount from the band’s album sales, tours, concerts, endorsements, merchandise, etc.

The heavy metal band has released a total of seven studio albums, a live album/DVD, two compilation albums, and about eighteen singles. It has sold over eight million albums worldwide. The following table shows the price of A7X’s albums as per Amazon.

Avenged Sevenfold earns around $9 to $12 with each sale of their albums. So, they must have earned a fortune from making millions of album sales.

Likewise, the band earns around $8.7K to $138.7K monthly and about $104.1K to $1.7M every year from their YouTube channel, as per Social Blade. In addition, the A7X also has its official merchandise, including various kinds of fashion items from t-shirts to bags and wallets. The prices of their products vary from $25 to $75. Also, including tours and concerts, the heavy metal band must be bagging a large amount of money.

As part of the band, M. Shadows must also receive his fair share from the concerts, album, and merch sales. Furthermore, Metal Shout estimates that the net worth of the Avenged Sevenfold is $100 million, and M. Shadows’ fortune ranks highest among his bandmates. Thus, his primary source of earnings comes from A7X.

Earnings Outside Of The Band

Outside of his career with the heavy metal band, Shadows has contributed to and has appeared on multiple albums by other popular artists. This includes his featuring on Steel Panther‘s 2009 released album, Feel the Steel.

The talented vocalist also produced The Confession‘s album named Requiem. He featured and sang for Good Charlotte‘s song “The River” on their album Good Morning Revival along with his band member, Synyster Gates, and has also sung for numerous other bands.

Sanders has even made a short cameo in the game Call of Duty: Black Ops II, in which he, along with Gates, provided voice-over and motion captures of themselves. Later, the singer was added as a playable character in the game’s “Blackout” battle royale mode. M. Shadows must have been paid a significant amount of cash for his contributions to these projects. Well, considering his various endeavors, it is no wonder that he is financially successful.

M. Shadows seems to be a generous person who finds contentment in giving back to society. The lead vocalist and his fellow members partnered with the Rockstar Energy Drink UPROAR Festival to announce an eBay Charity Ticket Auction in 2010. The charity supported the national non-profit organization known as Child Find of America.

Later in 2011, A7X matched charity donations up to $10,000 for the 10th anniversary of 9/11. They helped raise funds to respectfully remember the day and financially support foundations that assisted firefighters, police officers, and their families. Recently, the band’s benefit shirt money bought bulletproof vests for the Ukrainian citizens due to the ongoing warfare in the country. A7X’s shirts depict a well-known cartoon character Betty Boop as a Ukrainian guardian angel.

This is real life. Thank you to the @TheOfficialA7X @DeathbatsClub community for supporting this cause. Our T – Shirt donation bought many bullet proof vests for the Ukrainian people to save lives. Sent directly to the people using @ethereum Thank you @crypto_vandals pic.twitter.com/KL0m75gWnx

Anyway, the 40-year-old musician enjoys a blissful married life with his wife, Valary Sanders, and has two sons, River Sanders and Cash Sanders. With M. Shadows’ net worth being in muti-millions, his family must enjoy a comfortable life. He might also own a beautiful house and branded cars. Nonetheless, we wish him more success in his music career and prosperous life ahead.