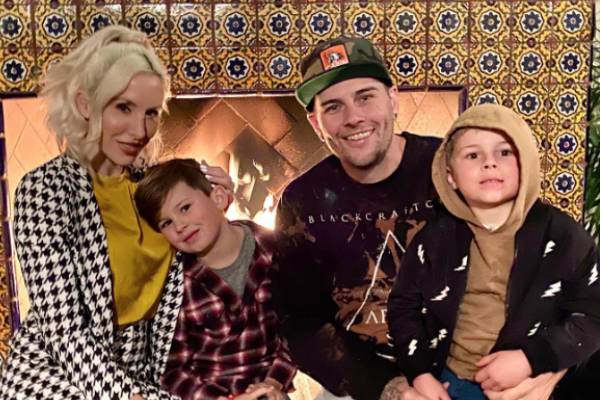 M. Shadows, born Matthew Charles Sanders, is one of the founding members of the popular heavy metal band Avenged Sevenfold. He performs as the lead vocalist in the band and is also the songwriter. He is a famous American singer and musician.

Besides a successful music career, the 40-year-old singer enjoys a blissful marital life with his gorgeous wife, Valary Sanders. The lovely couple shares two sons together. Many fans must be curious about M. Shadows’ children. So, let’s learn about the little ones.

As mentioned above, Shadows and his wife, Valary, enjoy a joyful married life together. The husband-wife duo first met when they were only sixth graders and became childhood sweethearts. Both of them attended Huntington Beach High School, located in California.

After staying in a longtime relationship, the pair decided to tie the knot on October 17, 2009. They have been married for almost thirteen years now. The husband-wife couple welcomed their first child, a son named River Sanders, on July 14, 2012.

Then, just about two years later, on August 15, 2014, Valary gave birth to her youngest son, Cash Sanders. M. Shadow’s son, River, is nine years old and his brother, Cash, is currently seven years old. The Sanders siblings only have an age difference of two years. Since they are of nearly similar ages, the brothers must be close to each other.

It wouldn’t have been surprising in this time and era if M. Shadows’ children had their social media handles. Unfortunately, however, River and Cash do not have any accounts of their own. Regardless, the little ones frequently appear on their mother’s Instagram.

The Sanders family often goes on vacations, fishing trips, and traveling together. River and Cash also attend their dad’s concerts and stage performances. Moreover, all these moments are documented by Valary and she shares them with her fans.

Valary seems to be quite an expressive person as she shares a lot of pictures with her husband and their kids. Her posts related to her two sons are filled with sweet captions and hashtags. For instance, she once uploaded a picture of her boys, captioned with “my mini kings” and a heart emoji. Well, isn’t that just adorable.

River And Cash Are Related To Synyster Gates

The Sanders brothers’ mother, Valary, has an identical twin sister named Michelle DiBenedetto. Their aunt married one of their father’s band members, Synyster Gates. Gates holds the position of songwriter, guitarist, pianist, and vocalist in the band.

Michelle and Synyster got married on May 7, 2010, and have welcomed two children together. The couple’s first child, son Nicolangelo “Nicci” Saint James Haner, arrived on May 12, 2017. Later, Michelle gave birth to her daughter, Monroe Saint James Haner, on October 14, 2019.

M. Shadows’ children must adore their little cousins since Nicci and Monroe are a few years younger than them. Valary sometimes uploads pictures of her niece and nephew with her sons on her social media handle.

We hope to see more interactions between the little ones. Nonetheless, it seems River and Cash are living a comfortable and happy life with their parents. Anyhow, we wish M. Shadows and his family a successful and healthy life in the future.

The name River is of British origin that means “body of flowing water.”

Likewise, the name Cash is a boy’s name and is of English and Latin origin meaning “hollow.”