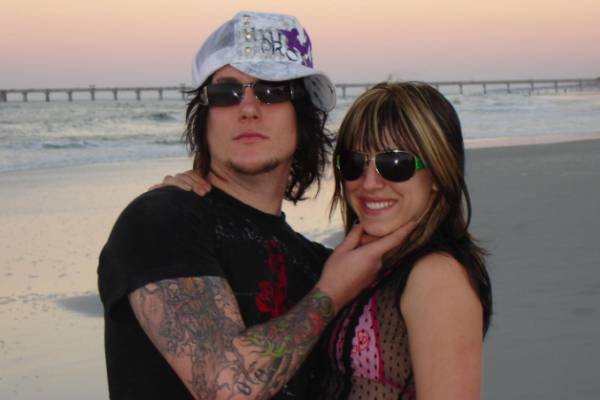 Born Brian Elwin Haner Jr., Synyster Gates, is a renowned American musician and guitarist. He also goes by Syn and is best known as the lead guitarist, and backing vocalist of the heavy metal band Avenged Sevenfold, aka A7X.

The guitarist has been enjoying a successful career in the music industry. In addition to that, he also enjoys a blissful marital life with his gorgeous missus, Michelle Dibenedetto Haner. Many fans must be curious about his partner. Thus, this article will help you learn more about Synyster Gates’ wife.

Has A Twin Sister

Michelle DiBenedetto was born to her parents, Debbie DiBenedetto and Nick DiBenedetto, on April 7, 1982, in Ojai, California. Moreover, her mother and father welcomed her and her identical twin sister Valary DiBenedetto. Michelle is the older one among the two.

Futhermore, Michelle’s younger twin is married to Synyster Gates’ bandmate in Avenged Sevenfold, M. Shadows. That means Gates and Shadows are brothers-in-law. Moreover, the Shadows-DiBenedetto couple married on October 17, 2009, and share two children together. In addition, the DiBenedetto twins are younger sisters to their big brother, Chris DiBenedetto.

Synyster Gates’ wife attended Huntington Beach High School in Huntington Beach, California. She now designs clothes for her husband’s merch store named The Synyster Gates Store. Additionally, she is the co-owner and the Creative Director at Saint Owen. Michelle founded and established the brand along with her twin in January 2017.

It is known that the couple met when they were still school students. Well, it is unclear when the pair started dating, but they tied the knot on May 7, 2010. The guitarist uploads pictures of his beloved on his social media handles pretty frequently.

On the contrary, Synyster Gates’ wife has made her Instagram account private. Regardless, we don’t doubt that Michelle posts about her husband on her private profile. The lovebirds have been married for over a decade and recently celebrated their twelfth wedding anniversary.

Synyster Gates’ Wife Is A Mother Of Two

Synyster Gates and Michelle DiBenedetto share two children together. They waited for quite a few years after their wedding before they were ready to expand their family. Finally, seven years after the husband-wife duo exchanged their wedding vows, they welcomed their first child.

Nicci and Monroe are cousins with M. Shadows’s children with his wife. Their older cousin brothers are named River Sanders and Cash Sanders. There isn’t much age difference between the cousins, so we are assuming that they get along well. The Haner siblings’ aunt, Valary, sometimes posts photos of them hanging out with their cousins on Instagram.

Anyway, the husband-wife duo must enjoy a comfortable life. With Synyster Gates’ net worth being $16 million, and his spouse’s financial stability, it wouldn’t be a wonder if they do. Of course, Synyster Gates’ wife’s earnings must also increase with the growth of her brand. Regardless, we wish the Haner family a happy and prosperous life in the future.