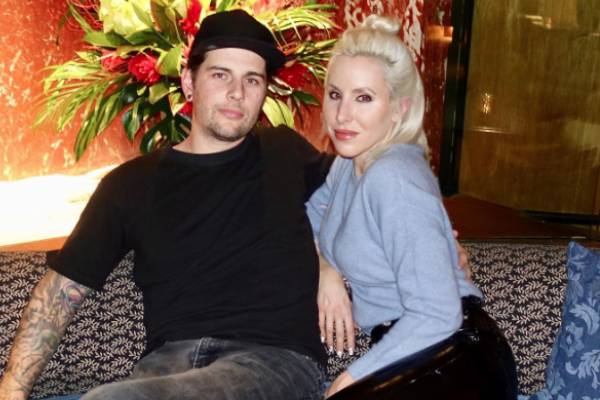 Matthew Charles Sanders is an American singer and songwriter who goes by his stage name M. Shadows. He is the founding member of the heavy metal band Avenged Sevenfold. Additionally, he is the lead vocalist and a songwriter for the band.

Besides a successful music career, the 40-year-old singer enjoys a blissful life with his family. His fans must be curious about his spouse. Thus, we will be learning all about M. Shadows’ wife, Valary Sanders.

Valary DiBenedetto Has A Twin

Valary DiBenedetto was born Valary Renae DiBenedetto to her parents Debbie DiBenedetto and Nick DiBenedetto. Moreover, she was welcomed along with her identical twin sister Michelle DiBenedetto on April 7, 1982, in Ojai, California.

Furthermore, Michelle is married to M. Shadows’ fellow Avenged Sevenfold member, Synyster Gates, whom she married on May 7, 2010. That means that the two bandmates are also brothers-in-law. The DiBenedetto twins also have an older brother named Chris DiBenedetto.

M. Shadows’ wife started dancing when she was only five years old. She even worked as a dance instructor. Valary also worked for her husband’s band, the Avenged Sevenfold as their tour manager for four years. She attended California State University and graduated in 2005 with a BA in Creative Writing.

DiBenedetto, who recently turned 40, is also a model and an actress who has made her appearances in movies like A Wedding Most Strange, Erased, etc. Furthermore, she has also worked as a writer and producer in various films, television series, and commercial projects. The model is also the founder and owner of her brand, Sait Owen.

Valary and her husband enjoy a delightful marriage together. M. Shadows’ wife first met him when both of them were in sixth grade. The pair also attended the same school, Huntington Beach High School, in California. Well, it is unclear when they started dating precisely. However, it is known that the singer and the model dated for a long time and were childhood sweethearts.

After dating for a certain period, the lovebirds decided to take their relationship to the next level. Shadows and Valary exchanged their vows on October 17, 2009. It has been twelve years since the couple tied the knot and twenty-seven years since they have known each other.

The bond between the pair must be very strong since they have been together for almost three decades. DiBenedetto is also a big fan and a great supporter of her husband. She constantly posts about M. Shadows’ news on her social media handles.

M. Shadows’ Wife Is A Mother Of Two

The singer and his partner share two children together, both sons. The couple welcomed their first son, River Sanders, in July 2012. Then after about two years, M. Shadows’ second son, Cash Sanders, arrived in August 2014.

The little ones frequently appear on their mother’s social media accounts. Going through Valary’s Instagram handle, it seems the couple’s kids are being homeschooled. Rivers and Cash Sanders seem to be living a merry life with their parents.

And with the M. Shadows’ net worth being around $20 million, we’re sure the Sanders family are all enjoying a comfortable and joyful life together. Nevertheless, we wish the singer and his entire family a prosperous and healthy life ahead.