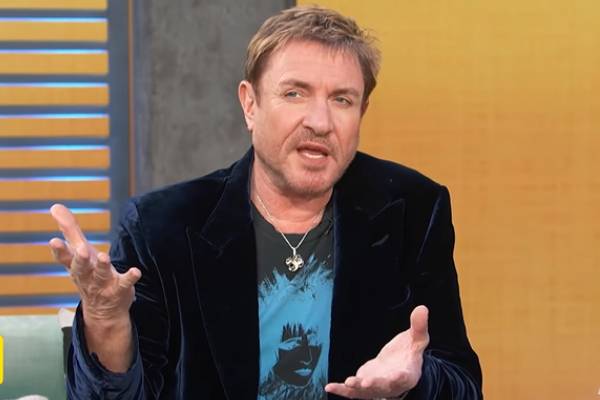 Simon Le Bon is the lead singer and lyricist of one of the most successful bands, Duran Duran. Image Source: Social Media.

If you are a fan of the new wave band Duran Duran, you must know the band’s lead singer and lyricist, Simon John Charles Le Bon, shortly, Simon Le Bon. The three-time winner of the Ivor Novello Awards has established himself as one of the most successful musicians and composers in the industry.

The talented vocalist has been in the industry since 1980. With a music career stretching over four decades, Simon must have amassed a significant sum. So, in today’s article, we will be learning about Simon Le Bon’s net worth from his career as a musician, composer, and actor.

Duran Duran is one of the best-selling music bands globally. Not only Simon Le Bon but other members of the band, Nick Rhodes, John Taylor, and Roger Taylor, have also gained huge fame and wealth with their creative music and lyrics.

As reported by Celebrity Net Worth, Simon Le Bon’s net worth is $65 million. So now, let’s further break down his earnings and income sources.

Duran Duran was formed back in 1978 in Birmingham. However, the lead singer only joined the band in 1980. The band’s first single, Planet Earth, was a hit. But, it was the band’s third single, Girls on the Film, that attracted the most attention. It became the no. 5 song in the UK at that time.

The band has since released a total of fifteen studio albums, four live albums, fourteen video albums, and forty-six singles. In addition to that, it has sold over 100 million records. The following table shows Duran Duran’s albums and records sales over the years:

As you can see, the band Duran Duran’s music is a huge hit and has garnered a massive amount in record sales. As a significant member of the band, Simon must have received his fair share. Hence, Simon Le Bon’s riches being $65 million is not surprising.

Besides, Duran Duran’s merchandise is also popular among its fandom. Considering the fan following on the band’s YouTube channel and Instagram page, members must earn a hefty sum through them too. For instance, the band’s estimated YouTube earnings is $3.7K – $59K monthly and $44.2K – $707.8K yearly.

Aside from Duran Duran, the talented musician has also released solo albums. His first solo work was Grey Lady Of The Sea. The song was created for the Whitbread Round the World Race. Afterward, Simon contributed many songs and collaborated with many artists. Some of them are, Follow In My Footsteps, Nobody Knows, Fire, Dream Boyz, Simple Joys, and many more.

Above all, Simon Le Bon is also the founder of SYN Productions, along with his wife, Yasmin Le Bon, and his friend, Nick Wood. In 2000, the entertainment company founded SYN Records, which has also gained commercial success.

Alongside the success in his band, Simon’s solo works have also been a huge hit. Well, considering his various endeavors, Simon Le Bon’s net worth seems completely deserving.

Considering the financial success of the musician, anyone can guess how lavish his life must be. Well, Simon Le Bon lives with his wife, children, grandchildren, and mother in a massive mansion in London.

In 2021, Yasmin and Simon got permission to extend their 10-bedroom house, increasing its size by about 33%. The villa was reported to be worth multi-millions of pounds.

Moreover, the couple doesn’t seem to want their children to move out. Their daughters, Saffron Le Bon and Tallulah Le Bon, live with them. In addition, Saffron’s partner and two children seem to cohabit there as well.

Simon Le Bon is a generous person who gives back to society. In 1985, the lead singer and his band member contributed to the Live Aid Fundraising concert, which raised $191,740,000 of fund for the Ethiopian famine.

Also, the musician is an ambassador for the Tall Ships Youth Trust. The trust runs seafaring trips for young people across the United Kingdom. Not only that, but the artist is also fundraising for Oxford Hospital Charity.