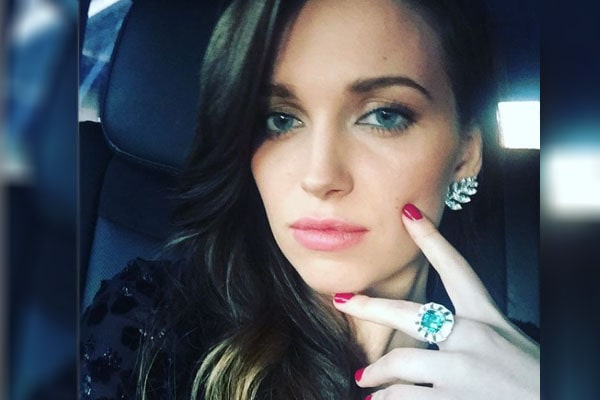 Paul David Hewson, known by the moniker Bono, is a world-famous Irish singer, philanthropist, venture capitalist, and actor. Best known as the lead vocalist and lyricist of the Irish rock band U2, Bono has won several accolades and awards to date, including twenty-two Grammy Awards. As a member of U2, he was inducted into the Rock and Roll Hall of Fame in 2005. Besides, he executive produced the 2000 film The Million Dollar Hotel, which starred Milla Jovovich, Mel Gibson, and Jeremy Davies. Also, he portrayed the character, Dr. Robert, and sang the Beatles ‘I Am the Walrus‘ in the 2007 musical film Across the Universe.

Aside from being a successful entertainment personality and activist, the U2 rocker Bono is a fortunate person in his personal life also. He is happily married to the Irish activist and businesswoman Alison Hewson, with whom he fathers four talented children, two daughters, and two sons.

Here, we will be focusing on one of Bono’s daughters with Alison Hewson, Jordan Hewson. Stay with us throughout this article to know everything about Jordan, including her professional and personal life.

Eldest Child Of Bono With His Wife Ali Hewson

The celebrity couple, Bono and Ali Hewson exchanged their wedding vows in 1982 after meeting in their teenage years. Seven years after their marriage, their daughter, Jordan Hewson, arrived on 10 May 1989, making them proud parents for the first time. Reportedly, Bono named his eldest child after his good friend, the Irish film director Neil Jordan.

Despite being the celebrity personality, Bono’s daughter, Jordan Hewson, had a normal childhood. Her parents always made sure their stardom did not affect her daily life. Jordan attended the local school in Dublin, Ireland. Growing up, she earned a Bachelor of Political Science degree from Columbia University. Later, she gained Masters in Creative Writing from the same university.

Jordan Hewson has three younger siblings. She became a proud big sister for the first time with the arrival of her sister, Eve Hewson, on 7 July 1991. Similarly, Jordan’s brothers, Elijah Bob Patricius Guggi Q Hewson and John Abraham Hewson, joined the Hewson family on 17 August 1999 and 21 May 2001, respectively.

Currently, Jordan’s sister, Eve, is pursuing her career in Irish showbiz while one of her brothers, Elijah, is preparing himself to follow in their dad, Bono’s footsteps as a musician.

When Jordan and her siblings were born, her dad, Bono, had already gained immense fame in the Irish entertainment industry. He used to get very little time to spend with his kids at home due to his busy schedules. But, when Bono was home on breaks in between world tours, he loved to drive Jordan and her siblings to school as that was the time he got to spend with them.

During an interview, Jordan’s sister, Eve, said that when their father Bono did the school run, he loved to mortify them.

Jordan Hewson’s sibling, Eve, revealed that their father would drive in his dressing gown and shades. She added that in the traffic on the Blackrock Road, Bono liked to put on Backstreet Boys really loud and begin dancing in the traffic. Due to his behavior, Jordan and her siblings felt humiliated. However, they knew well that he is the kind of dad he is, and he knows how to embarrass them.

Although Jordan’s dad used to embarrass her and her siblings when they were kids, he always supported her in every step of her life. Jordan shares a great bonding with both of her parents and often appears in public events together with them and her siblings.

Has Some Acting Credits To Her Name

Bono’s daughter, Jordan Hewson, also tried her hand in acting a couple of times. She made her acting debut in 2005 alongside her sister, Eve, in a short feature movie, Lost and Found. Before that, she had a brief appearance in an episode of The Late Late Show in 2003.

Jordan’s sister, Eve, went on to star in several films after their debut in 2005. However, Jordan decided to follow in her mother Ali’s activist footsteps full-time and thus did not sign for further acting projects.

An Activist And A Tech Entrepreneur

While Bono’s youngest daughter, Eve, paved an epic career in the film industry, his eldest, Jordan Hewson, pursued a career in humanitarian works. Currently, she is an activist and a successful businesswoman based in New York City. She had moved to the United States from Ireland to study at Columbia University.

Most notably, Jordan Hewson is the founder and CEO of Speakable, a technology company that utilizes the latest technology to make civic engagement more effective and accessible. She did not turn to her famous dad for help while launching the company in 2016 to promote social activism. Jordan’s company released their first product, ‘Action Button,’ in October 2016. It connects viewers to polls, petitions, and charitable causes.

Before founding Speakable, Jordan lent her hand to launch GlobalCitizen.org and expanded the company’s product strategy to increase user engagement. Besides, she is also a Director at a youth-led development agency, Restless Development. Restless places young people at the forefront of charitable development in Africa and Asia.

The daughter of the international rock icon Bono, Jordan Hewson, is currently in a romantic relationship with a hunky Spanish actor, Diego Osorio. The cute couple met each other through mutual friends in New York at the beginning of 2017 and are together ever since.

Both Jordan and her boyfriend, Diego, have already met each other’s families. Moreover, Jordan Hewson’s suitor, Diego, has even holidayed with her family at their luxurious home in Eze in the south of France and is close with her father. He likes to talk politics with his girlfriend’s famous father and attend his concerts with Jordan. All these events hint that the romantic couple is planning to exchange their wedding vows soon.

Bono’s daughter, Jordan, and her suitor, Diego, are open about their romance. They often post pictures of them together on their respective social media handles. While talking to Spain’s Vanitatis Magazine, Diego described his lover, Jordan as a very funny, intelligent, and committed lady. Both of them are happy and feel blessed to have one another in their life.

Before meeting Diego, Jordan was reportedly dating the French talent agency entrepreneur Jerome Jarre. They were in an on/off relationship till the end of 2016. But now, it seems like Jordan Hewson’s boyfriend, Diego Osorio is her forever’s mate. Currently, they look to be in a live-in relationship. But hopefully, they might marry soon.

The Unisex name Jordan originated from the Hebrew word Yarden, which means descend or flow down.