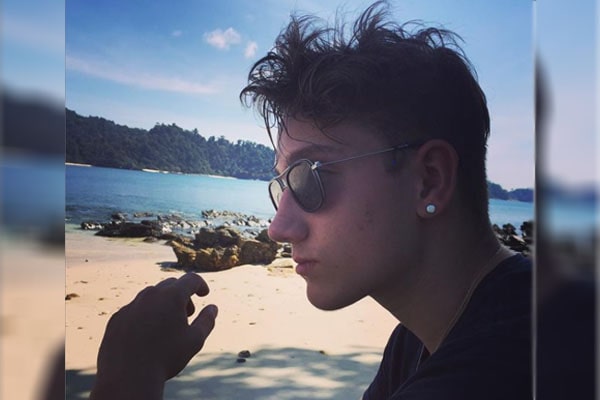 Bono is not an unfamiliar face in the entertainment world. He is a world-known Irish singer-songwriter, philanthropist, businessman, and actor. Born Paul David Hewson, Bono is mainly famous as the primary lyricist and the lead vocalist of rock band U2. As a member of the band U2, Bono has won a total of 22 Grammy Awards. In 2005, the rocker was inducted into the Rock and Roll Hall of Fame. Besides, Bono is also the receiver of the 2003 Legion of Honour from the French government and the Pablo Neruda International Presidential Medal of Honor from the Government of Chile.

The versatile singer and actor Bono is married to businesswoman and activist Alison Hewson. His marriage to Alison is one of the most long-lasting in the celeb world. The long-time couple is blessed with four kids, including their son, John Abraham Hewson.

U2’s primary lyricist, Bono, married his teenage love, Ali Hewson, in 1982. They welcomed their son, John Abraham Hewson, on 21 May 2001 in Dublin, Ireland. He is the youngest son of the celebrity couple, Bono and Ali, and has three elder siblings, two sisters, and a brother. John’s eldest sister, Jordan Hewson, was born on 10 May 1989, while his other sister, Eve Hewson, arrived on 7 July 1991. Similarly, his brother, Elijah Bob Patricius Guggi Q Hewson, is two years older than him, who joined the family on 17 August 1999.

All of his three elder siblings attended the Dalkey School Project, located in Glenageary, County Dublin. His sister, Eve, had once mentioned in an interview that all four of them went to the same school. So, it hints that the youngest of four Hewson siblings, John, also completed his primary education from Dalkey. However, the high school and college attended by him are still not available for the public to date.

His Brother Is Also An Aspiring Musician

Like his father, Bono, John Hewson’s brother, Elijah Hewson, also pursued his career in the music industry. Bono’s son, Elijah, always showed an intense passion for his dad’s profession from his early childhood days. Currently, he is following in his international rockstar dad’s footsteps after setting up his own rock band, Inhaler. In the BBC sound of 2020 list, John’s brother’s band placed fifth. Moreover, the band was also named on the NME 100, the same year.

Furthermore, both of John Hewson’s sisters, Jordan and Eve, are also gaining success in their own chosen career paths. His eldest sister, Jordan, is a well-known tech entrepreneur and an activist like his mom, Ali. Likewise, John’s other sister, Eve, has established herself as one of the most-loved Irish actresses at the moment. In 2021, she starred in the British supernatural psychological thriller web series, Behind Her Eyes where she portrayed the character, Adele.

Coming back to John, he does not seem to have tried his luck in music or any other field at the moment. But, once his dad had written that the youngest Hewson family member is a natural comedian whose idols are street artists. Moreover, according to Bono, his youngest, John, plays rugby as he did and is better than he ever was. Yet, John has not chosen any specific area as his career. However, given the success of his parents and siblings have found, we are sure he will also break out of his shell and attain stardom on whichever career path he chooses shortly.

Prefers To Stay Far From Limelight

Unlike his famous siblings and parents, Bono’s son, John Hewson, prefers to stay out of the spotlight and live a normal life. He is available on Instagram with over 2K followers at the moment. However, his posts are only available for those whom he confirms as his trusted ones. As a result, there are not many details about his profession and daily life.

Though John Hewson’s Instagram account is private, his siblings share his pictures on their social media pages on several occasions. On his 15th birthday, his sister, Jordan, posted a photo of him taken on a beach, mentioning him as the unofficial tallest Hewson. Some months before his birthday, she had even posted pictures of him massaging her foot and taking a selfie with her. Later, in 2019, Jordan shared another picture with John and her other siblings, in which they are having their brothers-sisters time.

Seeing the snaps shared by John’s sister, we can clearly see that he has grown up to be a very handsome tall boy. We hope we will get to know more about this charming lad in the upcoming days.

The male given name John is a popular name derived from the Hebrew word Yohanan, which means graced by God.