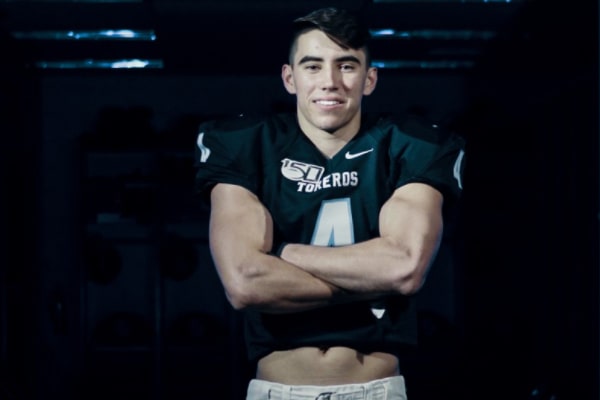 Despite being a freshman, Dana White III is already considered as a star football talent at his college. Pic Source: Dana White III's Instagram.

Dana White, the American businessman, and owner of the biggest fighting promotion in the world, is not someone you would want to mess with. The powerhouse leads the Ultimate Fighting Championship and has a net worth of approximately $500 Million.

The UFC boss is married to his high school sweetheart Anne Stella White and is blessed with three children. Their eldest born is named after 51-year-old himself, Dana White III.

Below let’s look at five interesting facts about Dana White’s son Dana White III and get to know him more.

Dana White the 3rd is into football despite his father owning the biggest fighting promotion. The 5’11” athlete started as a dual-threat quarterback but switched to safety after breaking his collar bone.

The star child was part of the Crusaders, the football team of Faith Lutheran High School. After graduating, he joined the University of San Diego and was immediately added to its football team, Toreros.

His former high school head coach, Vernon Fox, stated that Dana White’s son was aggressive and active around the ball. He also said that Dana III liked to be in action.

Although his debut season in college football was put to hold by the ongoing covid-19 pandemic, Dana White’s kid trains with his teammates in their enormous mansion.

Dana White’s Son Dana III Is Already In A Relationship

Dana White’s kid, Dana White III, is following in his father’s footsteps by dating Isabella Comella from his schooling days.

Dana the 3rd and his girlfriend both graduated from Faith Lutheran High School. However, she did not follow him to the University of San Diego. According to her Instagram, Comella is attending the University of Miami.

The lovebirds are public about their relationship, and Isabella is even accepted in the White family. They go to family functions together, and looking at their pictures, they seem a perfect fit for each other.

It was obvious for them to go to prom together as they were “the couple” from their early year.

Dana White is a multi-millionaire sourced mostly from his fight-making for the UFC. Other than that, the father of three is a huge gambler who is into poker and betting.

Dana White III’s father also has his own whiskey brand, Howler Head, the official sponsor of UFC. The MMA Tycoon isn’t shy about splashing cash as he hands his kids all the luxurious products from cars to the latest gadgets.

Assuming what he did for his middle child, Dana III might have also received an expensive gift from his father. And there is no doubt that Dana will go above and beyond to celebrate his daughter, Savannah White‘s birthday and other important days.

Many people have criticized Dana 3rd’s father, so much so even his grandmother, June White, has cut off ties with him. In 2011, June released a book, Dana White, King of MMA: An Unauthorized Biography, in which she accuses her son more of turning his back on his family.

Despite all the claims from his own family, Dana White is the biggest inspiration for his son. The football prodigy is proud of his father’s work ethic as he started from scratch.

He appreciates that his father was not a privileged child and how hard he worked to become successful. Moreover, Dana White’s son remains motivated in life because of his work dedication.

As the eldest son of one of the most popular figures, Dana III is always compared to his father. And, since he is the firstborn, many claim him to be the rightful heir to Dana’s fortune.

The 5’11 athlete regularly gets trolled online by being compared with his father especially linking the baldness part. MMA’s alpha male has remained bald for decades, and the trollers on the internet always target that issue.

The go bald like dad harassment is slowly dissolving as the White family gives less than little attention to it nowadays.

Nonetheless, Dana White’s son Dana White III was never forced to follow in his father’s footsteps as he is one of the star talents in college football.

We wish him the best for his good health and overall well-being. We also look forward to seeing him bring his talents in football to the professional leagues.

The name Dana is a unisexual name of Hebrew origin with the meaning “God is my judge.”