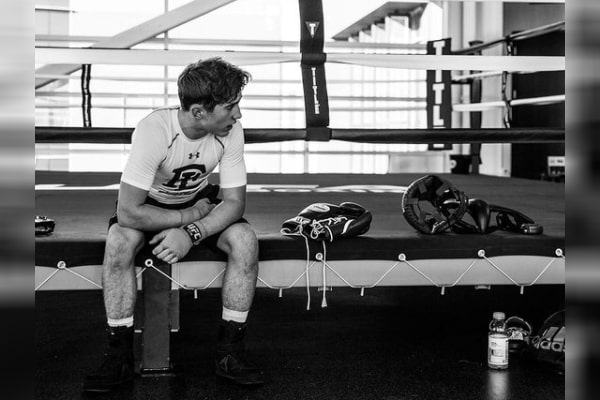 American businessman and the president of the biggest fighting promotion, Dana White, is a father of three. The 51-year-old, when not bossing around the Ultimate Fighting Championship, keeps himself busy with his family.

The multi-millionaire is married to his high school sweetheart Anne Stella White since 1996. In their over 20 years of togetherness, they have been blessed with two sons and a beautiful daughter.

In this article, we will look into Dana White’s son Aidan Charles White and get to know him better.

Out of Dana White’s children, his second child, Aidan White, has gathered the most attention. He has become a celebrity child star of his own and has a whooping 23.5K followers on Instagram.

Aidan’s brother Dana White III recently joined the University of San Diego and became part of the football team in freshman year. In addition, the MMA Tycoon’s youngest child and only daughter, Savannah White, is in her schooling years.

In 2018, Aidan White made his amateur boxing debut at the St. Patrick’s Day Boxing Show. The entire scene was covered on his father’s Instagram as Dana was his son’s cornerman.

The 18-year-old was put up against Andre LeClerc and had their bout at the Junior Golden Gloves Division. However, the star power of the UFC’s boss was enough to make the debut of his second-born as the main event for the evening.

Other than boxing, Aidan also has Muay Thai and Brazilian Jiu-Jitsu training but excelled much more with his striking. He hasn’t fought since and holds the record of one win and no loss.

At the moment, he is improving his game which has kept him away from the sport.

Since your father owns the biggest fighting promotion in the world, you surely have a lot of benefits. As Aidan Charles is taking boxing seriously as a profession, his father has provided him with all the support.

Besides training and getting useful tips from his father’s employees, Aidan is also privileged to meet his heroes such as Dwayne “The Rock” Johnson and seven-time Super Bowl winner Tom Brady.

Unlike him and his brother, Aidan’s mother and sister rarely appear in the spotlight.

Dana White went all in for his second son’s 16th birthday party, which reportedly cost him over $1 Million.

It was a day-time pool party and night-time concert in Drai’s Nightclub, Las Vegas. The concert featured performances by A$AP Rocky, Migos, Everlast & DJ Carnage. The amateur boxer was doing stage dives and enjoying the moment.

Dana’s son had also been given a boxing championship belt which looked quite expensive. The entire birthday bash seemed more expensive than a UFC event.

Dana White’s son Aidan White is a boxer and a skilled football player currently playing for his high school.

Like his brother, Aidan also attended Faith Lutheran High School and was part of the Crusaders’ football team. He is not at the level of this brother, but one wouldn’t mess around with him in the field.

Aidan graduated from high school in May 2021 and is yet to start his uni-life.

His Girlfriend Accepted In The Family

Dana and Anne have been supportive parents to their kids and have even accepted their girlfriends.

Just like his brother, Aidan keeps the details of his lovelife private but often posts pictures with his partner. The love birds attended their high school together and were even given the thumbs up by Dana White.

Since both of them have graduated from high school, information about whether they will attend the same university remains a bit blur.

With all that said, Dana White’s son Aidan Charles White is living life happily and enjoying his boxing. We wish him the very best for the days to come and his overall well-being.

The name Aidan is a boy’s name of Irish origin which means “little fire.”