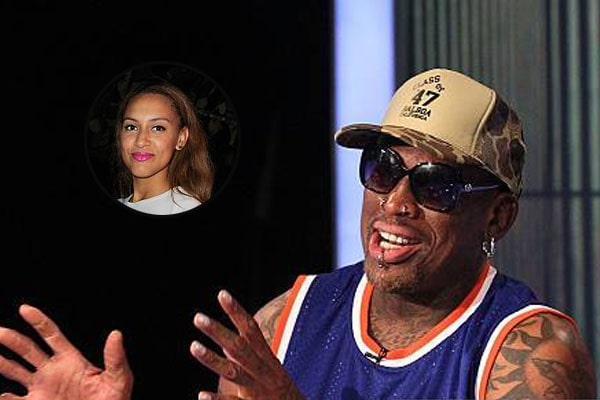 Dennis Rodman‘s daughter with his ex-wife, Annie Bakes, is Alexis Rodman and was born in 1988. Alexis’ parents first began dating in 1987, and they married each other in 1992. However, just after 82 days of marriage, Alexis’ dad and mom divorced each other to live separately.

Well, coming back to Alexis, her dad is a former American professional basketball player. She has two half-siblings named Trinity Rodman and DJ Rodman. They are Dennis Rodman’s children with his ex-wife, Michelle Moyer. So, let’s not waste any time and stick with the article to know more about Dennis Rodman’s daughter, Alexis Rodman.

Well, it’s not easy to grow up seeing your parents live a separate life. According to the Chicago Tribune, Alexis had issues with anger management in the past. Alexis’ mom, Annie claimed that she used to show a lot of anger and held it against her that she left Dennis. Alexis probably couldn’t bear her parents not living like a family, together.

When Alexis was in school, she said to kids at school that her dad had girlfriends and that he never came to see her. Not only that, but she once hit a girl while playing basketball and replied: “Well, Daddy does it.” So, there was no option but to counsel her for ‘anger management issues.’

Since Alexis’s parents also had issues, Annie told that she would have stayed with him if they had gone to get counseling. Nevertheless, she got out of her anger management issues, and most probably doesn’t have any kind of disorder. She grew out of it, though, mostly out of the spotlight. Well, we can say that Alexis is perhaps close to her dad-mom and probably have a healthy and warm relationship.

Dennis Rodman’s Daughter Is Married And A Mother

It looks like Alexis Rodman is happily settled in her life with her husband. The lovely couple of Alexis and her baby father gave birth to their first child, Vincent, in 2017. Vincent’s existence in the world brought tons of happiness and joy to Alexis and her husband’s life. Alexis’ dad probably couldn’t hold the happiness of him being a grandpa. So, he immediately tweeted such good news on Twitter too.

Although she is a married woman, she has maintained a distance from the limelight and media. As mentioned above, she was not a familiar face in the spotlight from her childhood days. Dennis Rodman’s daughter is happy with her low-key life. It looks like she doesn’t seem to use any social media too.

Alexis’ half-brother and half-sister followed father’s footsteps and pursued a career in athletics. But Alexis doesn’t look like a fan of sports and all. She might be doing a usual job or business at the moment.

According to the Greek origin, Alexis came from the Greek name ‘Αλεξις,’ meaning ‘helper’ or ‘defender.’