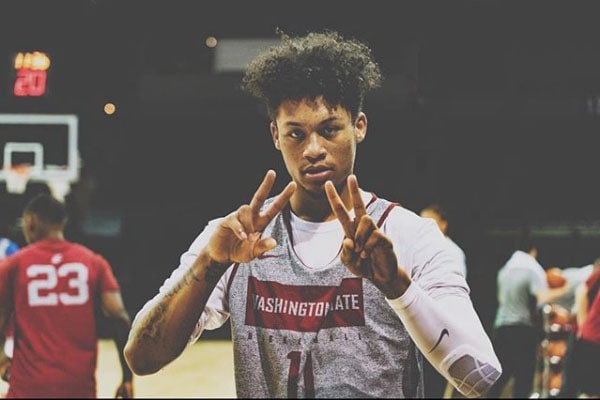 Born in 2000 at Newport Beach, California, Dennis Jr. ‘DJ’ Rodman is Dennis Rodman‘s son with his ex-wife, Michelle Moyer. He is the eldest child of the ex-couple and has a younger sister, Trinity Rodman. DJ Rodman‘s dad is a former American basketball player and earned great name and fame from his career. However, DJ Rodman’s parents divorced each other in 2012.

DJ also has a half-sister named Alexis Rodman. She is Dennis Rodman’s daughter with his ex-wife, Annie Bakes. FYI, he also has a half-sister, Teyana from mom’s side and is a mother of two children. Well, DJ is continuing his father’s legacy in basketball, and if you want to know more then, better stick with the article. So, let’s not waste any time and take a close look at Dennis Rodman’s son, DJ Rodman.

The former NBA star, Dennis Rodman, is so proud of his son, DJ, since he extended his legacy in basketball. DJ signed a financial aid agreement with the WSU Cougars, which made him the sixth member of Kyle Smith‘s first recruiting class at WSU. Dennis Jr.’s dedication and athleticism were probably transparent and impressed everyone too.

According to Bleacher Report, the Washington State coach said,

“DJ is a shotmaker who has a really good feel for the game. He was a very productive player displaying the ability to score and rebound at a high clip in one of the best high school leagues in California, the Trinity League.”

As a senior at JSerra Catholic High School, Rodman averaged 24.2 points, 8.9 rebounds, and 1.2 assists per game. Smith added saying, he has family roots in basketball and was thrilled to be a Coug.

Perhaps, Dennis Jr. Rodman might be funneling in promising income and earnings as a basketball player. At the same time, his dad couldn’t be more proud of him. DJ Rodman’s dad must be giving him pro tips to improve his game day by day.

So, in a nutshell, DJ committed himself to become one of the best in basketball. He still has miles to go and hopefully achieves all the success in the future.

Relationship With Dad And Mom

Dennis Jr has got a warm relationship with both of his parents. Actually, he loves to hang out with them from time to time. We assume he is certainly living on his own and has an independent life.

Going through DJ Rodman’s Instagram, we can see that he has posted photos of him with his mom and sister. Also, giving a glance at DJ’s mom’s Instagram, she frequently posts photos of DJ and Trinity. It shows the mother and children have a strong bond with each other.

Dennis And DJ also have an amazing father-son bond with each other. In addition to that, DJ and Trinity are like best buddies and have a great bro-sis relationship. However, DJ Rodman is probably single and doesn’t have any love affairs and relationships.

The name Dennis is of Greek and English origin, meaning ‘follower of Dionysius.’ Similarly, Junior refers to ‘younger’ and is used to distinguish a son from his father.