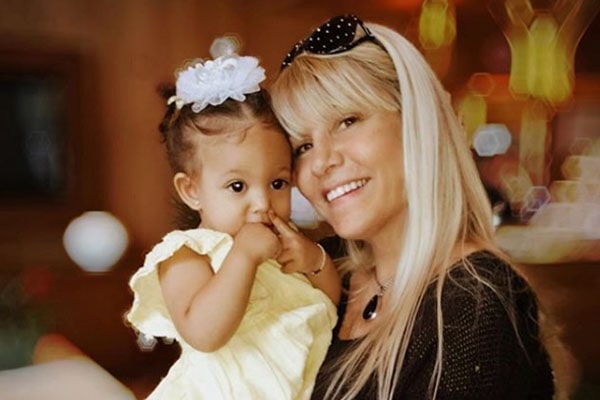 The process of falling in love is unpredictable and requires a lot of patience and a non-judgemental attitude. Despite all the love and indulgence, some partners are habitual of seeking greener grasses and end up ruining what they once had. Such was the relationship between the former NBA player, Dennis Rodman and his ex-wife, Michelle Moyer. If you are an NBA fanatic, you are well accustomed to the infamous scandals and feuds of Dennis Rodman. Thus, we all know the infidelity, and the chaos followed.

However, a thing to note is that the flashy player, Dennis Rodman, was married to Michelle for nine years before separating. Therefore, let’s look into who Rodman’s third wife, Michelle Moyer, is and what their relationship was like in this article.

Dennis Rodman’s ex-wife, Michelle Moyer, is an American persona who rose to fame after marrying the NBA star. Born in 1967, in the United States, she has been maintaining a very grounded life. However, one thing is straight that she is a phenomenal mother. The gorgeous mother of two nurtured her children as a single mother and raised them to be successful athletes.

Besides being a mother, she has appeared in a couple of tv shows. According to Moyer’s IMDb, she appeared on Sober House and Celebrity Rehab with Dr. Drew in 2010. Dennis Rodman was in the show for his alcohol addiction. Despite having very little information about her, she seemed to be a good mother and was a good wife.

What Was The Relationship Between Michelle And Dennis Like?

The couple of Dennis Rodman & Michelle Moyer met in a bar in 1999. Chemistry evolved instantly between the two, and they began dating in no time. Only a few months later, their relationship, Rodman’s now-former partner got pregnant with their first child and welcomed Dennis Rodman Jr. aka DJ Rodman in 2000. Only a year after giving birth to her son, The former Rodman couple welcomed a baby girl in 2001 and named her Trinity Rodman. The couple seemed to be having a healthy relationship and were happy with their children.

The happiness led them to walk down the aisle on 13 May 2003 in a private ceremony in New Port Beach. The couple tied knots on Rodman’s 42nd birthday. The wedding was a private ceremony while a grand party was thrown in mid-June on the beach. However, the marriage did not last long, leading Dennis Rodman’s ex-wife to file a divorce in 2004, only a year after their marriage.

In an interview with Oprah, Dennis confessed that the relationship lasted for nine years, and the couple lived in separate homes. It looks like the secret of a lasting marriage is distance and healthy space.

Aforementioned, Rodman’s ex-spouse filed the divorce in 2004. According to TMZ, the divorce was registered again in 2012 after a botched attempt of reconciliation. The former player allegedly owed Michelle a whopping amount of $800,000 in child support. He was facing a possible 20-day sentence after failing to pay child support as he was ‘broke.’

Another motive of filing the divorce was that Michelle wanted closure for her kids. As of now, the former couple is separated and living happily. Dennis Rodman is trying to become a father he never had as his father; Philander Rodman Jr. had abandoned him when he was just 3.

Talking to Ophrah, Dennis revealed that he was doing fine, finally single, and thankful for his children for loving him. He also confronted that the divorce was mutual and was quite optimistic about his ex-wife being happy with her partner.

As noted before, Dennis Rodman’s ex-wife did an excellent job as a mom and raised exceptionally talented children. Rodman’s son has followed his father’s footsteps and is prepping to enter the NBA world. Dj graduated from JSerra Catholic HS and is currently studying at Washington State University. For now, he plays for the school’s basketball team.

Likewise, Rodman’s daughter, Trinity, is already on her road to becoming an accomplished soccer player. She has played with the under-20 women’s team. She will further join her brother DJ for the school year and is very committed to her soccer career. Michelle is also close to Rodman’s eldest daughter, Alexis. The three siblings are very close to each other and are happy.