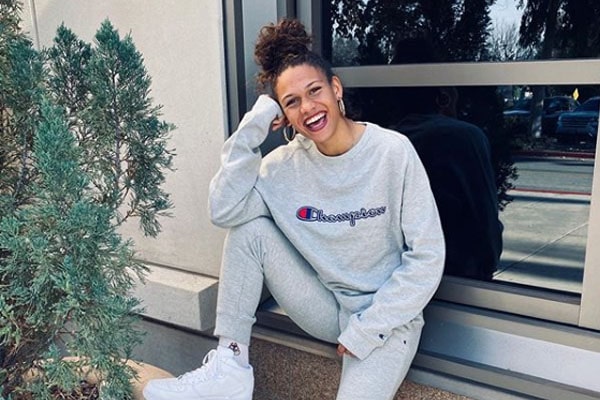 Dennis Rodman‘s daughter Trinity Rodman whom he had with his ex-wife, Michelle Moyer, was born in 2001. Trinity’s dad is a former American professional basketball player and achieved great success in his career. Trinity has an elder brother named DJ Rodman. After Dennis Rodman’s children were born, Trinity’s parents married each other in 2003.

However, Trinity’s mom filed for a divorce in 2004, and after years of being together, their marriage dissolved in 2012. Trinity also has an elder half-sister, Alexis Rodman. She is Dennis Rodman’s daughter with his ex-wife, Annie Bakes. FYI, she also has a half-sister, Teyana, from mom’s side and is a mother of two children. So, let’s not waste further time and get to know more about Dennis Rodman’s daughter, Trinity Rodman.

The gorgeous Trinity pursued a career in soccer that’s quite the opposite of her dad’s career. She is a soccer player by profession. She was interested in this line of sports from her childhood days. With practice and dedication, she is thriving as a soccer player day by day. She made a mark as the no.1 forward when she was in high school and graduated from high school in 2020.

Even though Dennis Rodman is a former basketball player, he perhaps advises her about true sportsmanship and athleticism. Trinity’s dad is always there to help her if she gets any problem. The family fully supports her, and Trinity will make her family very proud of her as one of the best soccer players in the upcoming years.

Trinity’s soccer journey officially began after choosing to play for WSU Cougar Soccer over signing with powerhouse UCLA. She made the school’s first-ever final-four appearance in the 2019 Women’s College Cup. Then, The Seattle Times also stated that Trinity got recruited for the 2020 Concacaf Women’s U-20 Championship. Trinity’s extraordinary skills and talent was probably the one they were impressed with.

The Americans cruised through the tournament with no loss and a clean-sheet. They scored 9-0 against Cuba, 4-0 against the Dominican Republic, and defeated Honduras with a scoreline of 11-0 in group plays. Trinity’s role in the team was vital as she is the goal scorer and finisher. USWNT U-20 crushed Saint Lucia 6-0 and Canada 4-0 in the knockout phase.

The USWNT reserved its spot after a 6-0 victory over the Dominican Republic again in the semi-finals. Trinity scored two impressive goals and also gave two assists to get the win. Trinity’s dreams came true, succeeding a 4-1 triumph against Mexico in the 2020 Concacaf Women’s U-20 Championship final. She and Mia Fishel each scored twice in the final game.

So, in a nutshell, Dennis Rodman’s daughter Trinity has already achieved massive success at the beginning of her soccer career. Her dad must be very proud of her and will always be supportive of her career. Trinity Rodman will probably become one of the greatest in women’s soccer someday.

Selected As The Second Overall Pick During 2021’s NWSL Draft

The eighteen-year-old daughter of the former NBA star Dennis Rodman, Trinity joined the National Women’s Soccer League (NWSL) at the beginning of 2021. The ESPN notes that the Washington Spirits selected her as the second overall pick during an NWSL draft on 13 January 2021. The Virginia-born defender for the North Carolina Tar Heels, Emily Fox, was chosen first by Racing Louisville.

While talking to CNN, Trinity Rodman said that this was her dream ever since she started playing soccer at the age of four. Dennis Rodman’s daughter, Trinity added that she is all set to step out of her dad’s shadow and shine out all on her own. Trinity also shared her excitement to be famous as Trinity Rodman rather than just as Rodman’s daughter. She is delighted to pave her own path and get better throughout her soccer journey.

Going through Trinity Rodman’s Instagram, it seems like she is in a loving relationship with her partner, Riley Majano. Talking about Trinity Rodman’s boyfriend Riley, he is a baseball player and perhaps is playing for one of the baseball teams. Both Trinity and Riley have the dedication and athleticism for sports. So, the two love birds look so perfect for each other.

Dennis Rodman might be happy with Trinity’s relationship too. The lovely couple probably goes on romantic dates. They love hanging out with each other that’s apparently helping build a strong bond and trust among each other. Trinity is often happy when she’s with Riley. She loves posting photos of her with him frequently on Instagram.

Therefore, if everything works out between the lovers, we could probably see them getting married in the future too.

The name Trinity refers to the three persons of the Christian Godhead; Father, Son, and Holy Spirit.