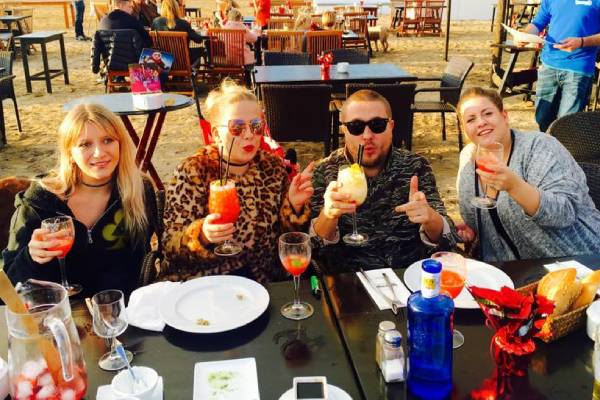 Andrew Arthur Taylor, known more as Andy Taylor, is a former member of the popular English new wave band, Duran Duran. He is a musician, guitarist, singer, songwriter, and record producer. Additionally, he is also a solo artist and has recorded and performed on his own.

Besides being a sensational musician, the 61-year-old is a family man. He is a loving husband to his spouse and a doting father to his children. Many fans must be curious about his little ones. So, we will be seeking to learn more about Andy Taylor’s children in this article.

Duran Duran’s former guitarist married his wife, Tracey Wilson-Taylor, on July 29, 1982. Just after two years of their wedding, on August 20, 1984, the couple had their first child. The pair’s firstborn is their only son, named Andrew James Taylor.

Andy Taylor’s son, who also goes by Andy J. Taylor, is a musician, just like him. He is a member and co-founder of an indie rock band named The Electric City. He is the vocalist and rhythm guitarist in the band.

Aside from his music career, the singer is also a chef. He, along with Tim Talbot, founded Le Bun, a dine-in and takeout restaurant. Le Bun serves dishes inspired by French and American cuisines and has a huge passion for developing original dual-cuisine creations. In addition, Andy J. is the Director of Operations and Creative Services at Dicks Hot Chicken & Beer.

Georgina Is A Mother Of One

Andy Taylor’s daughter, Georgina Taylor, is quite active on Facebook, and from what we could get, she is a doting mother of an adorable son named Albie. Unfortunately, there is no information about Georgie Taylor‘s baby daddy. She frequently posts pictures of her little one, which further tells how much she loves and adores him.

Georgina celebrates her birthday on August 11 and went to Exeter College in Oxford, England. She was in the class of 2006. Furthermore, the beautiful lady currently lives in Ibiza, Spain. Going through her social media accounts, she seems like a lovely person who is very appreciative and grateful for the people around her. She often posts about her friends and family expressing her love and adoration for them.

As per her Instagram bio, Bethany Taylor is a singer and songwriter. Looking at her posts, she seems to be an affectionate person who especially loves her family. She frequently uploads pictures of her mother and father with captions expressing her gratitude.

Bethany also has a Facebook account, as per it she went to Morna Valley School and Morna International College in Spain and lives in Ibiza.

Unfortunately, we couldn’t find much about her outside of her social media handles. She doesn’t seem to like sharing much about her profession or career interests. We await the day Bethany will be willing to share more about herself.

Isabella Is An Artist

Isabella Taylor is Tracey and Andy Taylor’s youngest daughter. She is an artist and enjoys curating and creating. Aside from her personal IG account, she has a separate account dedicated to her art and design.

A post shared by H to the izzo 🍒 (@izzybtaylor)

Izzy Taylor was also a part of the film project by Pili Mili Films, and Brew Films called “Unearthed” as a crew member. She appears to enjoy spending time with her friends on a beach and having a great time.

Anyway, all of Andy Taylor’s children appear to be doing great on their own. On the contrary, he has been diagnosed with stage 4 prostate cancer and there is no cure. Nevertheless, we wish the guitarist and his family a life full of happiness and prosperity.

Andrew is another form of the Greek name “Andreas,” which means “strong and manly.”

Georgina is a female name of Spanish and has an English origin, meaning “farmer.” Bethany is from the Hebrew place name, bearing the meaning “house of figs.” Finally, Isabella is the Spanish and Italian deviation of Elizabeth, which means “God is my oath.”